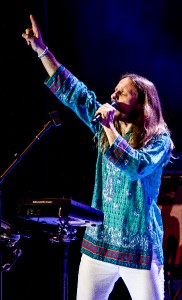 I can think of no better way to spend a Sunday evening on Labor Day weekend than to be sitting outside at the Greek Theater to hear the music of Yes.  And if that wasn’t enough, the bill also included Toto and newcomer Patrick Sieben as well.

The last time I reviewed Yes in concert, singer Jon Davidson had recently joined the group and I had just interviewed him about his new role with the band.  Davidson and his predecessor, Benoit David, have done a fine job filling the very big shoes of founding Yes vocalist Jon Anderson who was unable to continue with the band due to illness.

This time, the sudden passing of Yes founder and bassist Chris Squire left Yes fans in shock.  Like Anderson, Squire had also pioneered the progressive rock era, and surely every fan in attendance felt the absence of his towering presence.  The Toto camp had also suffered a similar loss earlier this year with the passing of bassist Mike Porcaro. 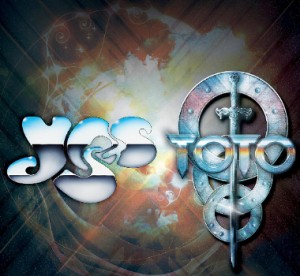 These bands have been through a lot these past few years.  But as hard as it is, the show must go on and both groups carried on the torch for their fallen band members. 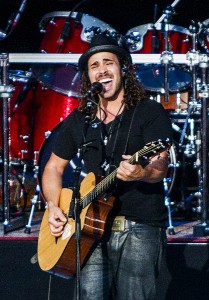 Patrick Sieben opened the show with an uplifting but brief set armed with only an acoustic guitar, his gritty voice, and a handful of cool tunes.  Sieben put on an impressive performance and it would be nice to catch this artist again with his full backing band. 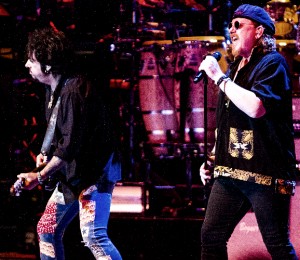 Toto was up next with their distinctive style of jazz/fusion rock kicking off their set with the song “Running Out Of Time” from their new album XIV.  They soon had the audience on their feet with their string of hits including “Hold The Line,” “I’ll Supply The Love,” “Afraid Of Love,” “Rosanna,” and “Africa”.  Some other musical highlights of the set included extended keyboard solos by David Paich and Steve Porcaro, along with guitarist Steve Lukather’s blistering version of “Little Wing.”

After a brief intermission, the lights dimmed and it was time for Yes to take the stage.  A lone spotlight shone on Chris Squire’s signature white Rickenbacker bass guitar as a photo montage of his career filled the video screen.  The song “Onward,” from the band’s 1978 album Tormato provided the perfect backing track as Squire’s bass lines and backing vocals weaved in and out of Jon Anderson’s vocals that seem to have been written (by Squire) just for this occasion.

To think of all the great music that had flowed through this instrument was beyond comprehension.  This touching tribute was a very fitting send off for a great musician who I had the honor to meet more than once.  Chris Squire was a guiding force behind Yes.  He had a great sense of humor, and he will be greatly missed. 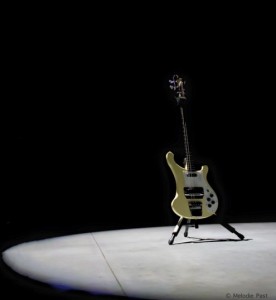 Contained in everything I do

There’s a love, I feel for you

Proclaimed in everything I write

Onward through the night

Onward through the night

Onward through the night of my life

As the lights came up, the familiar music of Igor Stravinsky’s “Firebird Suite” brightened up the somber mood and the newest incarnation of Yes took the stage jumping right into “Don’t Kill The Whale”, also from the Tormato album. 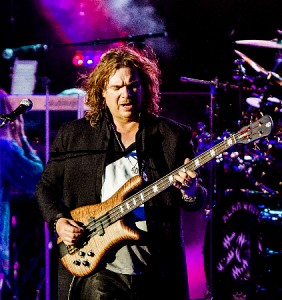 Billy Sherwood now took command of those intricate Chris Squire bass lines on songs like “Tempus Fugit” “Going For The One,” “All Good People,” and Yes’ left field extended remake of the Simon & Garfunkel song “America.”  Sherwood served as producer on several Yes albums and was an additional guitarist for supporting tours in the 90s.  His performance was true to those original compositions and Yes could not have found a more fitting replacement to perform these songs.

Sherwood not only knew the bass parts by heart, he also had Squire’s backing vocals down pat on those long epic pieces like “Siberian Khatru,” “Roundabout,” and on the encore track “Starship Trooper.”  At one point, I couldn’t help but notice how close Sherwood’s system sounded to the original recordings, and I wondered for a moment if maybe he was still playing through Chris’ rig?  Then it dawned on me … of course he was!

Jon Davidson took a solo on the introduction of the vintage Yes song “Time And A Word” with a vocal quality that couldn’t be any closer to the original, yet he still made it his own.  I had hoped to hear some new music from the band’s most recent release, Heaven & Earth, but I suppose it’s not always easy to fit everything in with all the great material this band has in their catalog.

As always, long-time Yes members Steve Howe (guitar), Alan White (drums), and Geoffrey Downes (keyboards) did not disappoint.  Geoffrey Downes stepped out to the front of the stage at one point to do a solo on his “Keytar,” and Steve Howe played a variety of instruments ranging from electric, acoustic, 12-string laúd, spacey slide guitar, and guitar-synthesizer.  Howe’s style ranged from classical to rock, jazz, bluegrass, and beyond. 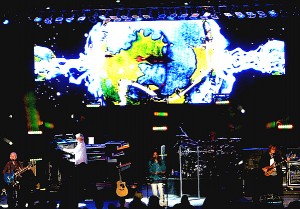 During “Roundabout,” the video animation took the audience into space to experience the planetary break-up from the Roger Dean designed cover of their Fragile album (with “Starship Trooper” coming to the rescue).  On “Owner Of A Lonely Heart,” the graphics took on a modern three-dimensional effect.

Yes has probably endured more personnel changes than just about any other classic rock band in the business.  It’s hard to say where the band goes from here, but Yes is a musical community that will live on.  This newest lineup carries on the tradition and the spirit of their founders with class and a great respect for those who came before.   Onward.

GOOD VIB(E)RATIONS: IRATION HEATS UP LATE SUMMER WITH HOTTING UP ALBUM AND TOUR 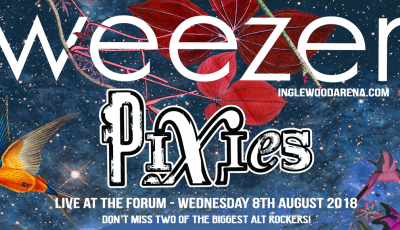