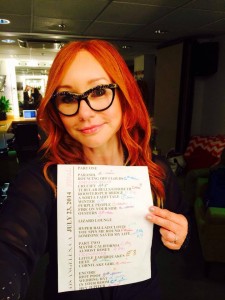 In the age of the www, there are very few true rock stars left. Musicians who not only write timeless songs and put on stellar live performances but also exude a larger than life aura that mystifies and captures the imagination. Whose lyrics make us daydream about how they came from some distant planet to save the souls of a chosen few. Who make us believe in something much larger than ourselves and, in return, we follow them anywhere. Tori Amos is a true rock star.

There are also very few true artists left. Those who create not to satisfy others or to profit, but simply because they must. They’re filled with glorious little animals (or “girls” as Tori calls them) that cry to get out and the artist becomes the vessel to give them life. Tori Amos is a true artist.

That said, it’s no surprise that after over 20 years Tori still maintains a sizable and passionate following of individuals who in some way or another have been deeply touched by her work. She’s still selling out large venues around the world, including last night’s performance at The Greek Theater in Los Angeles. That’s where I saw her weave her magic for the third time.

The Greek is one of the coolest places in L.A. to see live music. The slow journey up into the densely forested hills overlooking one of Hollywood’s hippest neighborhoods feels like entering sacred ground; eerily quiet yet breathing a steady, peaceful energy. Absolutely the ideal environment for Tori to cast her delightful spell on her more than willing SoCal chapter. A quick tip – always spring for the non-stacked parking, else you’ll be stuck waiting for thousands of other cars to uncover yours after the show. Definitely worth the $20.

There was an unadvertised opening act – a male/female folk acoustic duo – who provided background sounds while my wife and I (and thousands of others) casually walked the grounds of The Greek, sipping wine and people watching. Tori fans are a mix of Ren Fair nouveau-hippies and aging 40-ish hipsters, some of whom judged her PG enough to bring their kids along.

When the lights dimmed for Tori she modestly pranced onstage without pre-recorded intro music or other pompous fanfare, politely blowing quick kisses to the congregation before getting right down to business at her piano. In the middle of the opening number, “Parasol,” she sensed she didn’t yet have the full attention of those who were still settling into their seats, so without skipping a beat she violently slammed the dust cover of her Bosendorfer into the body of the instrument, producing a thunderous crack that must’ve sent the sound man reeling. After that the eyes, ears, hearts, minds and imaginations of 6,000 souls were hers for the next two hours.

Tori’s setup is a simple one. On a lone, centered riser sits her signature Bosendorfer Grand piano and a small synthesizer, positioned so that she can play both instruments at the same time while facing the crowd (which she does often and quite skillfully). A few background panels frame the stage and act as reflectors for her dreamy wash of slowly evolving color. Occasionally, vertical green beams fill the sky inside the Greek with smoky clusters and for certain songs tiny points of white light twinkle on the wall behind her. Tori does not require flashy presentation to captivate an audience, yet this subtle display tastefully compliments her delivery perfectly. 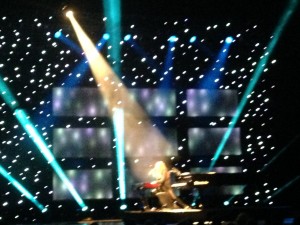 As she gave us her best effort to deliver a cohesive set from her enormous catalog she once again, in true artist form, kept us guessing with a smattering of the popular and not-so-popular. A set that seemed to satisfy her as much as it did us. Not only did she offer up her typical live, slightly-improvised renditions of full songs, but also gave us wonderfully crafted medleys and four deliciously haunting covers (Kate Bush’s “God,” Bjork’s “Hyper Ballad,” Dead Or Alive’s “You Spin Me Round” and Elton John’s “Someone Saved My Life Tonight”) that sent the audience bursting with silent joy.

You see, Tori shows are not your typical concerts. No one speaks during songs apart from the occasional “We love you Tori!” to which she sometimes answers politely in kind. It’s just her voice and her piano up there – stripped, raw and exposed for all to see – yet she has such confidence and effortless command of both her instruments and her audience. She speaks her own language that only we can understand. You want to simultaneously worship her and give her a big hug. She’s a sultry, sexual intergalactic siren and your favorite sweet Aunt. She often toys with us. She creates tension by holding out syllables for dramatic effect and then gives you sweet relief with an adorable glance or a timely breath. All around you, breaking the reverent silence, one can hear faint awestruck whisperings like “She is absolutely amazing!” or even sobbing from those who can no longer hide their emotion. It’s like nothing else, ever, anywhere. She truly has the power to put the outside world on pause for awhile so we can lose ourselves in beauty. Who doesn’t need more of that?

Heather M Talks About Her Hit Single, “Wanna Have Fun”, Spinning Records for Justin Timberlake and A Lot More!