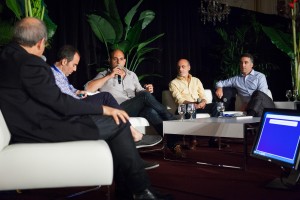 As we mentioned previously in this article, the concept of digital streaming in the access era was something sited by many as a possible game changing business model. This was even a major point discussed in our interview with Tom Silverman, who is on the board of Sound Exchange. He said something that was also echoed in this panel as well.   They believed streaming allows people to listen more, but they tend to engage less. It is important to note here that they also feel that even though numbers online indicate that use of playlists and streaming technology is growing, it is still difficult to gage an audiences reaction to a song or artist from them. That is also why we discussed Toms new ideas of testing records with this technology with him as well. With that said, despite their drawbacks, the panel believed digital playlists and streaming will prove to be such a huge revenue stream that it will financially aid a new renaissance in the music industry. Like Tom did in our interview, The Lipmans also referenced the possibility of making music more of a regular part of your cable bill.  This would be an idea that could reinvent the rules of the industrys economy. This part of the conversation very naturally then transitioned into discussion about radios future with music in a streaming world.  Each of these executives, while optimistic in a digital conversation, still looked to terrestrial radio to deliver results when generating familiarity. Once again, the Lipmans Republic Records was used as an example. Despite having hundreds of millions of YouTube views, they claimed that their artist Psys Gangnam Style did not truly reach its full potential, until the involvement of terrestrial radio. After hearing this, we theorize that perhaps the industry just hasnt caught up with the digital access generation. Maybe terrestrial radios infrastructure was the only way the business knew how to measure its success best. This is why there was also an emphasis on the need for labels to find new ways to break artists without radio being such a big dominant part of the process. By acknowledging the need to try new marketing ideas, these executives all recognized that breaking an artist today requires more patience now more than ever.  However, despite the long road ahead in doing so, they are all optimistic for the future. Each of them had stories about how one of their artists were making it through this ocean of music online, to find a loyal fan base and become stars.  Also, no matter what was being talked about, at the end of the day, they still just want to find artists that will change the world. So, they ended the seminar on the high note of taking the steps to ensure that the music industry can support those artists in the next generation.