“This Is The End” With Nick Carter 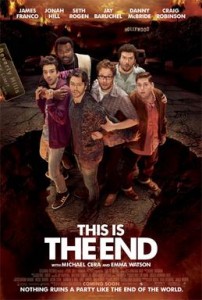 This Is The End Poster

This past weekend marked the rerelease of the Seth Rogan’s super funny comedy This Is The End. Just as the movie’s trailer indicates, the film features actors Seth Rogan, James Franko, Craig Robinson, Danny McBride and Jay Baruchel. While its plot is based around a mysterious apocalyptic occurrence, part of the movie’s fun is based around its whose who of celebrity cameos through out the whole thing. Nick Carter discussed Backstreet Boys’ cameo along with his new book Facing The Music And Living To Talk About it. To hear to that interview click here.

This Is The End Was originally released on June 12th. As of September 8th, the film has grossed $98,946,000 in North America, and $17,947,232  around the world. we’ve provided the trailer below for anyone who hasn’t seen it. It’s soundtrack, which features Craig Robinson, Snoop Dogg, KRS-One, Cypress Hill, Backstreet Boys, and Whitney Houston, was released by RCA Records.

This Is The End (Trailer)

Do You Have “Summertime Sadness?”

CHER LLOYD IS BACK WITH HER NEW SINGLE “I WISH” FEATURING T.I.