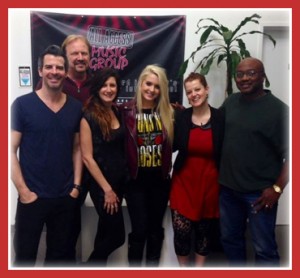 Macy Kate is the next generation of recording artists and You Tube artists making big moves within the music industry. You may have seen her on NBC’s daytime television show or viewed one of her viral videos with over 4 million views or caught her singing the national anthem for the NFL. She just inked a deal with Sony/ATV in a YouTube partnership, is on tour with the world’s largest pop booking agency, Paradigm, and is working with some of the hottest writers in the world. And oh, did we mention she is 15 years old?

The very talented, poised and well spoken singer stopped by the All Access Music Group office on Wednesday, January 29th and entertained the staff with a few of her favorite songs.

In Macy’s words, “I am a cross between Christina Aguilera, Alicia Keys with a splash of Adele. My main focus right now is writing songs so that teen emotions are relevant and taken seriously. I never really believed in myself as a singer until I received a standing ovation at The Sprint Center in Kansas City. That moment inspired me to never give up on my singing. In fact, that’s my message to teens, to never give up on your dreams and stay inspired.”

The singer told us that once she decides to do something, she never looks back, and she began her full-time music journey from there. “I got a keyboard for my birthday and started to play and record my voice for fun. Then my brother bought some recording equipment and a mic and started recording my voice over beats that he made.”

Macy started working with a teen band who hails from her hometown of Tampa called The Macy Kate Band. Cade Larson, Nick Lopez, and Austin Anderson write and pick out songs that fit her voice and would adjust them to make them more interesting and emphasize her vocal range.

“Finally, I felt like I could be myself with my sound and try new things, spin the vocal sounds, add growls, run and riff whenever and wherever. After a ton of travel and meetings in New York and Los Angeles, I found my true sound in Florida with my band.  Just like Dorothy in the Wizard of Oz, the answers to my problems were always in my own backyard.”

Macy Kate is the youngest recording artist to record with Sean Kingston and has opened for Rick Springfield, Aaron Carter, OMG Girlz, Seven Nations, IM5 and is performing with Radio Disney.

To learn more about Macy Kate, visit her website here.