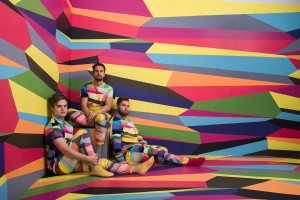 Spirit City has been described as an “indie pop band that merges deft songwriting with infectious hooks and driving rhythms.”

Formed in Provo, Utah, during the Fall of 2014, the group is comprised of Nate Young (vocals, guitar), Cori Place (bass) and Austin Young (synths, backing vocals). They came together from different musical backgrounds, which contributes to the uniqueness of their sound.

Playing to sold-out crowds, they have gained notoriety in the thriving Provo music scene—the same scene which has recently helped launch the careers of bands such as Neon Trees and Imagine Dragons. The band is set to release a revamped version of their We’re All Insane EP later in 2017.

Following the release of their fun filled anthem “Do What You Want,” Spirit City is embracing their synth-pop and atmospheric side with their latest tune. Listening to the band’s new single, “Stillness,” is like experiencing fireworks in slow-motion. The song is a constant suspenseful climb to the explosion-filled chorus. Permeated with wistful and enchanting sounds, “Stillness” evokes a whiplash of emotions like tranquility and nostalgia.

“‘Stillness’ started out as a very abstract idea–more of a feeling than a thought process,” shares Nate Young. “The fantasy-like state between consciousness and sleep, contemplating my purpose, that moment of total vulnerability and honesty between lovers, life and death, longing, heartache and healing… those were some of the themes, thoughts and feelings that inspired this song.”

Learn more about Spirit City in the following All Access interview:

What are some words you would use to describe 2016 for this band and your music? What were some of the highlights? What has been the most exciting part about this year?

Cori- Hmmm… I would say hard work, rewarding and rad. Haha. I use that word way too much. The biggest highlights for me was locally releasing our EP and opening for Third Eye Blind. They were one of my favorite bands growing up so that was surreal.

Growing up, did you all always want to be musicians? Can you recall the moment you realized that you could really make music together and be a band? How did you all first meet each other?

Cori- Nate (lead singer) and I met when we were 13. I heard he played drums and I wanted to start a band, so I went up to him and asked if he wanted to jam. At that point, I hardly knew anything about music in general, let alone writing music. So we just got together in Nate’s garage and figured it out.

How do you think your sound and really who you are as artists have been influenced by being from Utah? A lot of incredible bands have burst onto the scene from there so do you feel any pressure by being from there too?

Cori- We don’t feel any pressure. We feel lucky to be from Utah because there is such a great scene here. It has pushed us to be better and learn from those before us.

I understand that you all come from different musical backgrounds so I’m curious to know how that has helped the sound of Spirit City?

Cori- I was really into punk rock growing up, so as a bass player, that is where my roots are and I think they shine through in our music. When we write music, we always have reference tracks for our individual ideas and it gets eclectic, which is fun to mold. We don’t write songs that all sound the same. For us, this makes the music more exciting to listen to and to play. We grew up in the 90’s, when I feel many albums were less homogenous, and it was an experience to listen to an album. One of our goals is to bring that writing style back.

Was it hard to narrow down a band name? How did you finally decide? What other names were you considering?

Nate- It was. We actually went through several names. One we somewhat liked was Vona, which means hope in Icelandic, but it was too hard to pronounce correctly.  I eventually made a list of words and names he found interesting, and Spirit City was a combination of 2 of the names on that list.  We liked it, and thought it fit, so it stuck.

Later this year, you are planning on releasing a revamped version of your “We’re All Insane” EP. Can you talk about what how the EP has changed now? What was it like putting this collection together?

Cori- It was our first time ever working with a producer, Stuart Maxfield (Fictionist, Kaskade), which was equally exhilarating and nerve racking. It’s a weird feeling to present your ideas to someone that you have never worked with. For me, I never knew if I was going to be praised or laughed at. Haha. Stu is a wicked smart musician and writer, and he found our strengths and used them to help define the vision for the EP and further our sound. The EP that is finally being released digitally will feature our new single “Boundaries”. We are super stoked about it. It’s one of my favorite songs we have ever written.

What was the inspiration for your single, “Stillness”? In general, how do you three go about creating a song? Do you work altogether or separate at first and then join up later?

Nate- “Stillness” started out as a very abstract idea–more of a feeling than a thought process.  I remember Austin started playing some interesting sequenced chords on a virtual synth, and I started singing along, not with any words, just a falsetto melody.  It’s the melody that’s now in the interlude between the first chorus and second verse.

Later on, I was lying in bed unable to fall asleep, and I think I listened to a voice memo I’d recorded of our little jam–on that synth/melody idea–and the lyrics just started pouring in, falling from the sky so to speak.  Wherever inspiration comes from, I definitely felt those lyrics and melodies were straight inspiration, which I find is pretty rare in songwriting, at least for me.  I usually have to work pretty hard on lyrics, but those just came to me in the moment, again more as a feeling I was trying to put into words as best as I can, rather than articulating an idea.

The fantasy-like state between consciousness and sleep, contemplating my purpose, that moment of total vulnerability and honesty between lovers, life and death, longing, heartache and healing… those were some of the themes, thoughts and feelings that inspired this song.

Cori- Our song writing process is never exactly the same but Nate and I typically collaborate on everything. One of us will bring an idea and we build off of that. Over the years we have built a good working chemistry together. We are hardly ever on different pages or have differing opinions. We are lucky like that.

How have your shows been going so far this year? Where all are you excited to play at this summer? What do you think makes the best kind of performance for Spirit City?

Cori- Our best performances are all about energy. We react off the crowd’s energy and vice versa. When the crowd is feeling it, then so do we. It’s just our job to make sure the crowd is picking up what we are putting down. Summer shows are always fun, but we have fun in the winter too. We’re opening for Fictionist this Saturday at Velour in Provo – it’s the place to play in our hometown and they’re one of our favorite bands, so we’re super stoked for that show.  We have played some rad shows this year so far and look forward to playing tons more!

Who are some of your favorite artists? Who would you all to work with in the future? What would be a dream collaboration for each of you and Spirit City?

Cori- It depends on what mood I am in but I love Coldplay, Tom Petty, Bruce Springsteen, The Ramones, The Police, Nirvana…etc Personally, I would love Gregg Alexander (New Radicals) to produce some songs for us. That dude is one hell of a songwriter. His hooks are so infectious. Oh, I would also like to work with Brian Eno. His sonic landscapes are magic. That would be rad!

Cori- A few years ago I was listening to music at work and “All the Small Things” by Blink 182 came on. One of my co-workers who was an old Chilean dude, came up to me and told me he liked the song that was playing. I was floored because he absolutely hated everything that I listened to. He told me making people happy is what music is all about and “ATST” made him happy. Ever since then that has resonated with me. All I want to do is make people happy. Music should be an escape from the ugly things in this world. It should be a refuge for the mind. That’s what I want Spirit City to do for people.

Is there anything else that you would like to share with our readers about this band or your music?

Cori- If you like us, follow us. Come out to a show and buy our music. Check out our website www.spiritcitymusic.com for all things Spirit City.

An Interview With The Haitian Pop Artist, MONVELYNO!