Get to know The Gitas, the Los Angeles-based trio that is the embodiment of a mosaic of musical sounds and cultures seamlessly linked by a common core: create kick ass rock and roll! On their new album Beverly Kills (available February 17) founder, guitarist and vocalist Sasha Chemerov, bassist Sal Ramazzini, and drummer Brittany Macc set out to make an overriding point that we shouldn’t cling too hard to future goals of fame and fortune and instead we should focus on living life in the moment.

Sonically, Beverly Kills visits metaphoric musical neighborhoods inhabited by groundbreaking bands as diverse as Black Sabbath, The White Stripes, The MC5 and Nirvana. Lyrically, it lives in communal spaces as sundry as Hinduistic mantras to 50s and 60s era teenage laments. The seeming dichotomy of sounds and subjects actually fits like the pieces of a puzzle when you learn that Chemerov, Ramazzini and Macc hail from the Ukraine, Guatemala and New York, respectively.  These three musicians from far-flung corners of the globe tackle the clashes of cultures in the land of swimming pools and movie stars head-on, and the result is a killer record everyone should get to know right away. I recently spoke with Sasha Chemerov and Sal Ramazzini about the writing and recording of Beverly Kills. 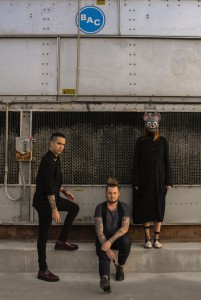 Good morning, guys. Thanks for your time today, and I’m happy to have you on the phone to talk about this record. So the upcoming album is called Beverly Kills, and its due February 17. The record opens with “Mantra,” which to me, sonically I describe as ominous. Tell me specifically about the message at the end.

Sasha: The message is that you shouldn’t be attached to your goals. You should enjoy the moment, and magic will follow.

I think that’s good advice. You should live in the moment, right?

Cool. So, I’ll ask you about several songs on the record, including track two, “4 Free,” which I think packs quite a punch in about three minutes, and to my ears is equal parts Black Sabbath and The White Stripes. Are you guys okay with that comparison?

Sasha: We’re absolutely okay because we’re trying to make music that’s not attached to a specific genre. It’s kind of everything. And what you just said, well those are two of our favorite bands, so yeah, great!

Great, so I got that right. Tell me a little bit more about that song, “4 Free.”

Sasha: So, basically you should understand that you can’t get something for free – everything has a price. That’s the main message of the song. You should pay for everything, in different ways.

Right, got it. You gotta work for what you get, right?

In the title track you sing about “Beverly Hills, champagne and pills.” Having lived in Los Angeles for the vast majority of my life, I get the sentiment, but I wanna ask you how many of those types of girls that you’re describing in the song have you guys met?

So, flush that out a little bit. Who are these girls? Describe the girls that are drinking the champagne and taking the pills.

Sasha: I think these are girls that are out for something. She wants to get something out of you, whether it be emotional or material. In L.A., I would say a lot more of it is material than emotional. So, yeah, you get it – gold diggers. I would say it’s a symbol of all this glamorous lifestyle that everybody wants to consume. Everybody’s trying to climb to the top not knowing what they’re going to see there.

Sal: Just like climbing without no sentiments or consciousness of what they want in their life other than power, fame, and wanting to be important and popular.

Sasha: I would say, Jim, that the [message of the] whole record, beginning with “Manta,” is that you shouldn’t be attached to that stuff. The whole record is about trying to explain that point. And the video explains the song really well.

Is it safe to assume on my part that you guys didn’t grow up near Beverly Hills?

Sasha: We came from different parts of the world. I’m from Ukraine, Sal’s from Guatemala, so we’re kind of international.

Sal: We’re an international band, but we actually feel like we’re from planet earth. We’re all from the same chunk of land at the end of the day, if you know what I mean.

How long have you guys been together as a band in Los Angeles?

Sasha: Almost about two and a half years. I’ve been here for about five years, and Sal for about four years.

Another track on the record that I really like is “Judas,” which is a sonic change of pace. What does this song tell us about Judas that we didn’t already know?

The tempo shifts again – I’d say into overdrive – with what I call the controlled chaos of the song “Check Out the Violence.” It’s just a tick over two minutes long, but you throw a lot into that song, too. I’m gonna make a reference here to a classic song. When I listen to it, I’m reminded of The MC5’s 1969 classic “Kick Out the Jams.”

Excellent! Tell me more about this one.

Sasha: “Check Out the Violence” is a song about the fight with drugs or alcohol or whatever monkey you have on your back. It’s actually a struggle song.

It’s always hard to say which track on an album is a real standout, but if I had to pick one from Beverly Kills it would be “Femme Fatale.” For two reasons: it may be my favorite tune on the album and it contains maybe my favorite lyric line on the album, which is, “You’re my favorite illusion.” Tell me about that lyric first, before we dive deeper into the song. 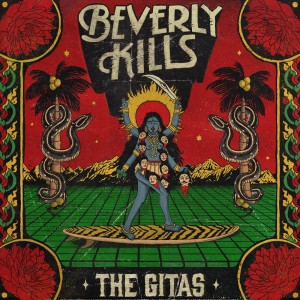 Sasha: It’s interesting that you picked this one. It’s about that love that is impossible. You have this kind of love sometimes, but it’s only an image. That’s why it’s an illusion, but it’s my favorite illusion because I’m in love right now, and I don’t give a s**t that it’s gonna crash and my heart is gonna be broken. I don’t care about that right now. It’s only an illusion.

Right. Not a lot of substance going on there, right? In a way, it goes back to the same old thing, which is guys always seem to fall back into the same old trap laid by the femme fatales.

Sal: Well c’mon, who doesn’t like that killer body and the super sexy walk? C’mon (laughs)!

(Laughs) Amen! I hear ya. That’s just the way it is, right (laughs)? So another one that stood out for me is “Magic.” What is the message in that track?

Sasha: Well “Magic” is the second single that we’re gonna release. This song is about unity. This song is a calling for people to get together, to get the real knowledge, which is the knowledge of nature and humanity, and just doing something really good. Make a change. It’s like (singing) come together, right now (laughs).

Correct me if I’m wrong, but I think “Magic” could be the yin to the yang of the song “Sharks of Disharmony.” I can’t think of a more timely and topical song considering what’s swirling around u today and the current state of politics we find ourselves in…

Sasha: Definitely, yeah! If you get a chance, check out the live video about it.

This song could have easily been titled “Sharks of Dishonesty.”

Sasha: Yeah, that’s true as well. At the end of the song I’m singing, “Don’t talk to me, don’t lie to me,” so you’re right, it’s sharks of disharmony, sharks of dishonesty, sharks of corruption and all this political bulls**t.

When did you guys find out you were fortunetellers (laughs)? When was this song written?

Sasha: Probably about a year ago.

Sal: I feel like there’s a universal air regarding politics. I feel like it doesn’t matter what part of the world you’re from, corrupt politicians are everywhere. Here, in Guatemala, Ukraine: they’re everywhere, just everywhere.

For the record, I was born in Peru, so I get the universalness of the message, no question about it. So I just have a couple more questions for you guys, but first I wanna make a comment about the opening of “Not Alive.” It took me right back to that opening riff of Black Sabbath’s “Black Sabbath.” Talk about the birth of this song.

Sasha: This one is actually dedicated to Layne Staley of Alice in Chains. It’s a song about a person that’s in pain and wants to do something good, but the person is too attached to drugs or whatever…

Sasha: Yeah, to this fight.

I don’t normally ask about band names or album titles, but can you explain the band name real quick?

Sasha: So The Gitas is [Hindu scripture] in Sanskrit which means songs, so we’re basically The Songs in Sanskrit. That’s the goal of the band is to make songs.

Final question: you certainly end the album by throwing the listener a sonic change up with “That’s All I Do.” This song seems to be built on a musical bed of those 50s and 60s teenage lament songs.

Tell me more about “That’s All I Do.” 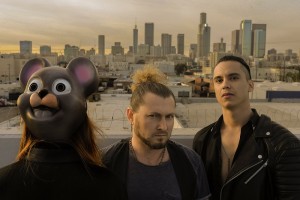 Sasha: “That’s All I Do” is actually a song about groupies and all that they can do for you. And it’s also about the guy, the musician, the star, whatever, who doesn’t care [about the groupie] and you should understand that.

Cool, sounds good. Is there anything else we need to talk about?

Sasha: Just go online to our webpage, TheGitas.com, and check out our YouTube channel and Instagram. We appreciate the time, Jim. We’re really, really grateful and thank you very much for having us and for taking the time to listen to the record. I’m very happy and grateful that you like it.

My pleasure, thank you, guys. I’m always grateful to get to talk to guys like you.

Sasha: Thank you, Jim. Thank you for being classy, my friend. Bye.

An Interview With Newcomer RZMRY On Her Latest Songs, Growing Up in Connecticut and More!

An Interview With Singer-Songwriter BISOLA On Her Brand New Single “Million Miles” and Much More!