Throughout my career I’ve been privileged to speak with – and on a handful of occasions befriend – many of the biggest names in the history of rock. I’ve been equally honored and lucky to champion and converse with countless artists and bands bubbling just under the surface of stardom; acts who many (including myself) have described as criminally overlooked, unsung, underrated or inconceivably ignored. Up until now, New York City’s The Compulsions, led by singer and rhythm guitarist Rob Carlyle, have fallen into that category of great bands that have fallen through the cracks, failing to crack the top of the charts while topping the bill at an immeasurable amount of clubs across one of the world’s most vibrant musical meccas and beyond. 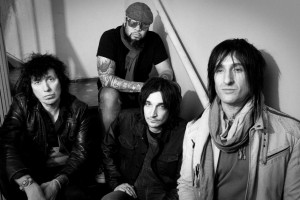 Carlyle, along with his cohorts lead guitarist Richard Fortus [Guns N’ Roses], drummer Frank “Thunderchucker” Ferrer [Guns N’ Roses] and bassist Sami Yaffa [Hanoi Rocks, New York Dolls], remain steadfast in their musical mission statement to stick to their guns and, according to Carlyle, avoid making music that “seems like sonic wallpaper.” He adds, “Hopefully when you listen to our stuff you can hear the roots that go all the way back to bands like the Stones and Led Zeppelin, but even beyond that. Speaking for myself and I’m sure the other guys, we go back and listen to the bands that those guys listened to. You’re talking about Muddy Waters, Howlin’ Wolf, John Lee Hooker and of course Robert Johnson and the list goes on and on. I feel like that’s what we’re going for. It’s just taking all of that into the future and into the next level hopefully.”

On April 14, The Compulsions will release their second album, Dirty Fun, a 10-song cycle featuring no-nonsense rockers such as “Hellbound Babies,” “Evil Bastards,” “House of Rock,” “I Still Got the Hots For You, Baby” and the Rolling Stones-steeped lead single “Lucky.” With any luck, Carlyle and The Compulsions’ passion, persistence and patience will pay off, and rock fans worldwide will discover what no less of an authority than Alice Cooper has already heard; something he describes as “that dirty sound that not enough bands seem to have these days.”

Rob, thanks for your time and I appreciate the call. So, in your opinion, which is one of the coolest unsung bands that you think, God, why didn’t these guys make it?

Ah, that’s a good question. I mean, besides my band (laughter)? I don’t understand why Black Rebel Motorcycle Club is not a bigger band. They blow so many bands away today. And they’re a current band out there. I don’t know why The Hives are not bigger. Those bands are just so much more interesting and cooler, and rooted in that country blues type influence. Those guys know music. I don’t know why those guys aren’t bigger.

Let me take you back to where it all began for you. As a native New Yorker, what role did the city’s rock radio stations play in your discovery of early influences like The Beatles, The Rolling Stones, Led Zeppelin and Pink Floyd, etc, etc?

Oh man it was huge. The radio was nothing like it is today. We had great stations like WPLJ and WNEW in New York City and also there was a station called I-95 in Connecticut. And incidentally, that was the one that I listened to the most. Even though I lived in New York I gravitated to I-95 a lot. The words Classic Rock didn’t exist back then. You’d turn on the radio and you’d hear one after the other, whether it was Creedence or Santana or AC/DC. You’d hear a song and go to a record store and buy the album and see if you liked all the other stuff and nine out of 10 times you’d realize that all these other songs were AC/DC, or whatever it was. I’m talking about when you were a little kid and just discovering this stuff for the first time. So like I said, from the radio station you’d go straight to the record store and that’s how it worked.

When did you first decide you wanted to pick up a guitar and play?

I must have been about 11 or 12 years old and on HBO at the time there was this movie called Let’s Spend the Night Together, The Rolling Stones concert movie. I never thought about actually picking up a guitar until I saw that movie and seeing Keith [Richards] and Ronnie [Wood] up there and it just looked so cool and looked like so much fun and it sounded amazing. Immediately, I was like, that looks like something I should try and learn how to do. That’s what made me wanna go get a guitar; that movie and seeing those guys.

Your album, Dirty Fun, arrives on April 14. Introduce us to the characters in the opening track, “Hellbound Babies.” 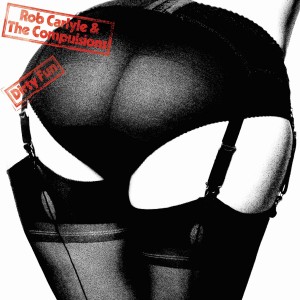 I just wanted to write a song about a band that was just struggling to make it and perhaps getting screwed over and not playing to big crowds and definitely not making any money but the guys are just into it for the fun and the music and the girls and the lifestyle that goes with it. I know a lot of bands like that. I wanted to come up with sort of like a bad cliché rock and roll band name and actually the original name was “The Shotgun Babies,” but in the end I changed it to “Hellbound Babies” because it was just a sicker title. I would hope that if you see it and you don’t know what the song is about and you saw the title you would go like, oh my God, what the f**k is that about, I have to press play on that one.

You said of the first single, “Lucky,” that you “wanted to write something more positive. The Rolling Stones have ‘Happy’ so I guess ‘Lucky’ is The Compulsions’ feel good song.” Tell us more about it.

In the end, if you actually listen to the last line, it’s just a guy who’s happy to be alive and just the love of life, as corny as that sounds. We’ve all gone through our fair share of bulls**t and heartbreak and near bankruptcy or whatever you wanna call it and you just have to find a way to survive. This song is really just about that; being happy to be alive. I think it’s the last line of the song and there it is right there.

Sonically and tempo-wise this track reminds me a lot of The Stones’ “Crazy Mama.” Would you agree?

Totally. That’s one of my favorites by them and it’s one that a lot of people don’t know about. It’s got that kind of lazy, half-stoned vibe to it that they’re really so good at doing. That sort of mid-tempo thing, I’ve always loved songs like that. Rod Stewart has a ton of those and Humble Pie had a ton of those. It’s not that easy to create that vibe. It’s easy to play fast and loud and hard and bulldoze through a song but to actually create a kind of rich, thick vibe is a lot harder. That’s one of the things we were going for with that.

The song “The Feel” is one of the coolest on the record. It’s slinky, a little sleazy and maybe a little spooky. It feels like it could be a cool edition to The Animals canon of cuts.

Tell me a little bit about that one.

There seems to be a lot of songs on this album that are about bands and this is another one. I mean you write about what you know, so writing about bands and music and stuff is definitely one area that interests me. “The Feel” is just a hodgepodge of a few bands that come to mind. As I say in the song, it’s the coolest band in the world, probably the greatest bar band in the world the way I describe it, but of course you gotta get that darkness in there, so they never make it. They just vanish into obscurity, never to be seen or heard of again, which is really a scary sad thing.

Track five on the album is titled “Evil Bastards.” Here’s a question you don’t have to answer if you don’t want to; if it’s too much of a hot button. With a little play off the song title here, who are the evilest bastards: record executives, club owners or radio programmers who refuse to play current music? 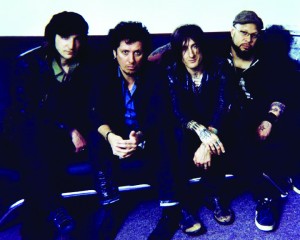 Well it’s definitely not the club owners (laughs). As far as record execs, I don’t know if they’re evil but I don’t know what they expect of unsigned bands these days. The criteria for what they want you to accomplish on your own is just ridiculous. I guess the criteria are get a million hits on YouTube, you don’t really need lyrics, you just have to have riffs and a million hits on YouTube. And as far as the radio guys, I don’t know whose running the show up there. They decide what they decide for whatever reason. I don’t know why certain people get the push and certain people don’t. I don’t get it. They should be more adventurous and take more chances and I think they’d be surprised at the result. So I don’t know why they do what they do. But when I finally take over though I’m gonna straighten it all out (laughs).

Hypothetically question for you: if the classic Rolling Stones lineup and the Led Zeppelin lineup were playing on the same night, which show would you go to?

When you say original Stones, do you mean with Brian Jones?

(Groan) Ah, that makes it way harder (laughs)! I mean I’d probably have to go with the Mick Taylor Stones although I’m not happy about having to make that decision. To me, those are the two greatest rock and roll bands that have come down the pike. But yeah I guess I’d have to go with the Mick Taylor-era Stones but it’s not an easy decision at all because I’m a huge Zeppelin fan.

Finally, you’ve said, “When I was a kid, music wasn’t something you’d multitask to. But a lot of today’s music seems like sonic wallpaper. Most of it sounds really polite. We’re definitely not going for that.” So what are you going for on this album, Dirty Fun, which comes out on April 14?

It’s the same thing that we’ve always been going for; it’s just rock and roll. I go back to almost the dictionary definition of it which is the combination of the black man’s blues and the white man’s country or folk music and you mix them together and that’s rock and roll.