ISLE OF MIGHT: TASTE TEST LIMITS OF POWERFUL PERFORMANCE ON CD/DVD TASTE: WHAT’S GOING ON – LIVE AT THE ISLE OF WIGHT

For decades when the conversation of listing the best guitarists in the world would come up amongst fans and musicians alike, the name Rory Gallagher was not necessarily guaranteed a mention. But in 1970 when Jimi Hendrix, the man whose name most assuredly is always immediately uttered, was asked how it felt “to be the best guitarist in the world,” the Rock and Roll Hall of Famer responded by saying, “I don’t know, why don’t you go and ask Rory Gallagher?” Hendrix paid the Irish-born Gallagher that ultimate compliment while at the 1970 Isle of Wight Festival, at which both guitar greats performed; Hendrix accompanied by Mitch Mitchell on drums and Billy Cox on bass, and Gallagher fronting his own powerful trio Taste, featuring John Wilson on drums and Richard McCracken on bass.

One source for Hendrix’s passionate praise of his fellow six-string superstar came from Taste’s triumphant August 28 set at the fabled festival, a performance captured on video for the first time in the recently released Eagle Rock Entertainment DVD/Blu-ray Taste: What’s Going On – Live at The Isle of Wight 1970, also available on CD, Double LP and digital formats. An estimated 600,000 people witnessed the Cork, Ireland bred Taste toss out a blistering barrage of blues rock sonic grenades, including the DVD and CD opening 5:31 “What’s Going On,” originally found on the trio’s second and final studio album, 1970’s On the Boards. Gallagher’s mastery of his instrument is mesmerizing as he continues to attack his axe with the precision of a surgeon and the fury of a warrior. 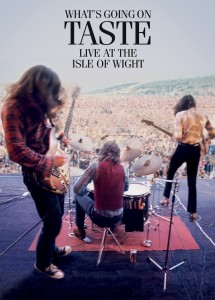 The track listings on the DVD/Blu-ray, CD and two LPs continue in lockstep for the next four passionate and punishing performances; the traditional “Sugar Mama” in all of its 10:47 of glory, “Morning Sun” (originally off On the Boards), the traditional “Gambling Blues” and the Gallagher-penned “Sinner Boy.” From here, the set list stories shift, with the DVD/Blu-ray showcasing three straight show stopping performances that include the 6:54 “Same Old Story,” the 14:11 “Catfish Blues” and 10:29 of the Big Bill Broonzy gem “I Feel So Good.” In addition to the last three extended numbers, the CD and double LP editions also feature original Taste treats “I’ll Remember” first featured on On the Boards and “Blister on the Moon,” the opening track on Taste’s 1969 eponymous debut.

Sadly, Taste fans were left with a somewhat bittersweet taste in their mouths following the trio’s triumphant appearance at The Isle of Wight festival when shortly after the gig, Gallagher confirmed that the band had decided to break up. Nevertheless, Taste had left an indelible impression on the concertgoers fortunate enough to have witnessed the three members leave all they had on the boards that day. Gallagher went on to enjoy a successful solo career and his influence on future guitar virtuosos is still being felt to this day by disciples who include U2’s The Edge and Queen’s Brian May, both of whom are featured on the DVD and Blu-ray heaping praise on the late musician, who died on June 14, 1995 at the age of 47.

Master musicians like Jimi Hendrix and Rory Gallagher can never be replaced, but thanks to the rediscovered treasure that is Taste: What’s Going On – Live at The Isle of Wight 1970, Gallagher’s name will forever be linked with the name of arguably the greatest guitarist of all time. For a kid from Cork, you can’t ask for much more than that.

LISTEN to An Interview With MARK BALLAS And BC JEAN That Make Up The Indie-Pop Duo, ALEXANDER JEAN! 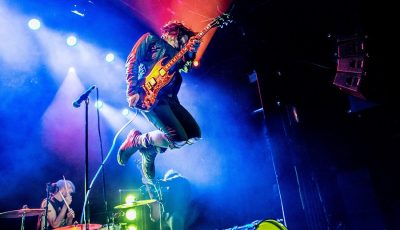