Singer-Songwriter CHRIS PIERCE Discusses His Latest Album ‘You’ve Got To Feel It’ and His Song Featured on Hit Show This Is Us!

By : Leah
Comment: 0
Tag: All Access, All Access Music Group, Artist Interview, Chris Pierce, This Is Us, We Can Always Come Back To This, You've Got To Feel It 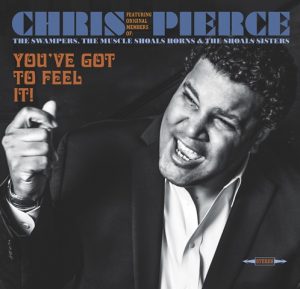 Get to know Chris Pierce! He co-wrote the hit song “We Can Always Come Back to This” which was prominently featured on the #1 US Primetime TV show This Is Us.  The song charted at #1 on the Billboard Blues Chart as well as top 20 on the Billboard Rock and R&B charts.

Learn more about Chris Pierce in the following All Access interview:

Talk about your forthcoming album, “You’ve Got To Feel It!” What was it like putting this collection together? What was the inspiration for these songs?

“You’ve Got To Feel It!” is a Soul album through and through.  It’s soul music, from the soul and for the soul.  The experience making music in Muscle Shoals, Alabama with such legends as The Swampers, The Muscle Shoals Horns, The Shoals Sisters and Donna Jean Godchaux was as exciting as it comes for me.  It was an honor and dream realized.  I’m eternally grateful to producers Dave Resnik, Steve Bassett and everyone involved in the making of the album.  The songs are a collection of well-known and less known songs from the 60’s and early 70’s that define the feeling of the moment in the studio for everyone involved.  Some were chosen in advance and some were chosen in the studio.  The whole experience was true fellowship.

How do you think you have grown and changed as an artist over the years? What has remained the same? Do you think that what drives you to make music has changed at all?

As my human experience has grown, I’ve flowed along with it.  My belief is that experiences in life define the kind of art that we make.  That will always be the core of where I come from in making music.  The urgency to communicate in a soulful way through making music has always been there for me.  That urgency remains at the forefront.

You have either performed on stage with or opened for so many incredible artists. Can you pick out a few memorable experiences? What musicians do you think that you have learned the most from over the years?

Having the honor of opening for B.B. King, Al Green & Aaron Neville really stand out for me, but all of the opening slots have been memorable in their own unique way.  The biggest lesson I have learned from sharing stages with some of my heroes is to simply have a conversation with the audience through my music.  Also, I’ve been playing in the Los Angeles music scene for many years.  My music making friends that I get to share the stage with, inspire me so much.  We push each other 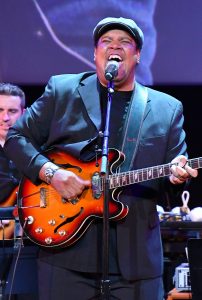 What did you think when you first heard your hit song, “We Can Always Come Back To This” on the last season’s newest hit show, This Is Us?

The journey of co-writing “We Can Always Come Back To This” was a very emotional experience for me, through and through.  Having lost my Dad years ago in a similar circumstance as the story line on “This is Us” brought back so many memories.  When we were writing the song, I tapped in to the spirit and memories of the Soul music that my Dad raised me on.  When the episode aired I was in tears.

Even though your music has been featured in so many films and TV shows, do you still get excited when you hear one of your songs on them? What was the first one you heard?

Always!  I love that experience.  So much work is involved from so many people on screen and behind the scenes to capture the emotional core of the storyline.  It’s always a pleasure to add my part through music.

What are your plans for this summer? Do you have any plans to perform live anytime soon?

I’ll be traveling a bit.  I’ve got some shows on the east coast in late July in the Boston Area and in Vermont, then I’ll be headed to Europe for a couple of appearances before heading back home for a handful of California shows leading up to the release of “You’ve Got To Feel It!”.

Where do you think you are happiest- on stage performing, recording music in the studio or elsewhere?

I honestly love it all.  It all humbles me and I’m honored to do any and all of it.  Being a man of expression is a creatively powerful feeling.  It drives me to be a lifelong student of art.

What artists have continued to inspire you and your music? Who would you absolutely love to work with in the future?

There are honestly too many to name and I discover new artists on a daily basis.  We are living in an extremely creative age of musical discovery.  I would absolutely love to sing a song with Brittany Howard someday.  She really pulls from the source!

What advice would you give to a young person who is considering getting into this music career path?

Trust your instincts.  Push yourself creatively.  Listen and choose your notes wisely.  Consider yourself a life-long student.  Find the strength for praise and rejection.  Practice humility in your daily life with 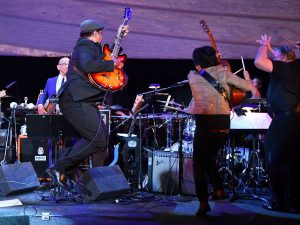 Composer Siddhartha Khosla, right, and Chris Pierce perform the score from This Is Us during WORDS + MUSIC, presented Thursday, June 29, 2017 at the Television Academy’s Wolf Theatre at the Saban Media Center in North Hollywood, Calif. (Photo by Vince Bucci/Invision for the Television Academy/AP Images)

music.  Surround yourself with folks that inspire you to do more and be better.  Always tell your truths through your instrument.

message of your songs?

At the end of the day, my hope is that folks remember me as a music maker that always gave his all, wore his heart on his sleeve, made music from his heart and soul and always left it all on stage, on the paper or in the studio.  My message is simple…Embrace your authenticity and soulfulness.

I’m honored to share the new album “You’ve Got To Feel It!” with you.  I hope that it finds its way to your stereo, headphones and into your heart.  I’ll be playing live concerts for the rest of my life and I hope to meet you and make music with you someday soon along the road.

An Interview With The Phoenix Folk-Rock Quintet JARED & THE MILL About Their Latest EP and Busy Summer Tour!