In a move that could be construed as a symbolic changing of the hard rock guard, Long Beach, CA bred Rival Sons has been handpicked to open each and every show on Black Sabbath’s worldwide final tour, “The End.” The nearly year-long road trip will see the formidable four-piece sharing stages with Hall of Famers Black Sabbath in nearly every corner of the world, from San Jose to Sydney, Vancouver to Verona, Kansas City to Krakow, Minneapolis to Melbourne.

Formed in 2008, Rival Sons – Jay Buchanan (vocals), Scott Holiday (guitar), Dave Beste (bass) and Michael Miley (drums) – have released four full-length studio albums: Before the Fire (2009), Pressure & Time (2011), Head Down (2012) and Great Western Valkyrie (2014), and have received lofty comparisons to rock royalty such as Led Zeppelin. In fact, both Jimmy Page and Ozzy Osbourne have dubbed Rival Sons one of their current favorite bands. “Jaws hit the floor.” That’s how drummer Miley described the reaction the band had to news they had been selected to be Sabbath’s opening act.

No doubt Black Sabbath fans across the globe will soon feel the full force of Rival Sons live and should walk away knowing the future of hard rock is in very capable hands. Having already earned a stamp of approval from two heavyweights of heavy metal, this foursome from Southern California is primed to prove they are worthy of having the hard rock torch past onto them once Black Sabbath’s long rock and roll reign comes to an end. 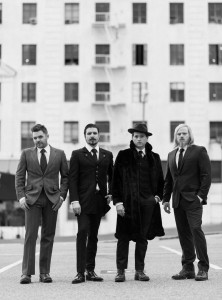 Miley, it’s good to talk to you again. You and I spoke about 2 years ago and I’ve had the pleasure of speaking with Jay and Scott a few times over the years, so thanks for your time today. Let’s kick off the conversation with a shot of caffeine, sort of speak. Your outstanding rendition of the tasty Humble Pie tune “Black Coffee” has just been named “The Coolest Song in the World” by the Sirius XM and syndicated terrestrial radio show Little Steven’s Underground Garage. How did you guys decide to put your spin on that song and slap it on the double-disc Tour Edition of Great Western Valkyrie?

Well originally there was a Steve Marriott tribute album that was being produced. We were on the road and passed through Nashville and our producer Dave Cobb was open to the idea, so we just went in there one day and just knocked it out. We kinda didn’t think about it for a while and then about a year and a half later we kinda resurrected it for our Record Store Day thing. We kinda made it our own, you know. It’s such a cool version of it and the performance is great; it’s all live in the studio, with the backup singers and everything. We’re super big Small Faces and Humble Pie fans.

It came out great, and you definitely made it your own. It’s a very cool song. Great Western Valkyrie is of course the current album, and that ties into the reference I made earlier of the double-disc tour set of that album. The six-song bonus disc also includes three songs recorded live at Juke Joint Studio in Norway, one of which is your version of the CCR cut “Long As I Can See the Light.” Again, a great, great version of that. Tell me why you guys decided to tackle that one.

We’re big CCR fans as well. We had this mix going when we first started touring. Jay had this mix that he would always play and it had that song on it, so this was like five years ago, and we would always say, hey we should do that song, and we never did. And then something came up – it was either that Norway thing or we played on a radio station in Toronto; I’m not sure where we did it first, but we just kinda knocked it out. We learned the chords, rehearsed it in the morning for the morning show. I believe we first did it in Toronto and then we recorded it acoustically at that Norway thing. It just kinda like happened out of thin air, actually. It wasn’t something that we overly rehearsed. Actually [here’s] a little secret: Rival Sons don’t rehearse (laughs). There’s something to be said about trusting each other as musicians, and something about the Rival Sons sound is better loose. If we’re too tight then it kinda loses its luster.

Yeah, for sure. I’ve seen you guys everywhere, starting at The Viper Room (in Hollywood) for the first record to the last time I saw you up here opening for Sammy Hagar at the Thunder Valley Casino outside of Sacramento, where I had a chance to chat with Jay and Scott on the bus after your set. So Miley, as hard as this might be to believe, not everyone has heard of Rival Sons – yet! But we’re working on it; we’re working on it (laughs).

(Laughs) We’re trying to fix that. 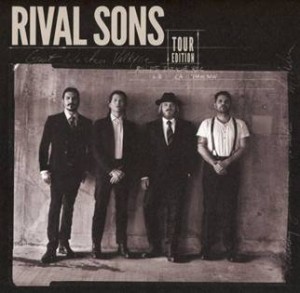 Yeah. So my guess is not everyone knows what Valkyrie means, so give is a brief definition of the word and why it’s part of the title of the album.

First, I would direct anybody to just go to Google and you’ll find a bunch of stuff on it. But basically a Valkyrie is a Nordic goddess who chooses who lives and dies in battle. So that’s kind of the nutshell version. Jay wrote that lyric in the song “Belle Starr,” and “Belle Starr” is about a female gangster in the 1800s. She robbed banks with the best of them. And so it’s kind of a mocking lyric of this female gangster. But we liked the sound of the phrase in the song and then we decided to name the album that.

It was pretty crazy. First we did the Classic Rock Awards in Los Angeles and Ozzy and Sharon were there, amongst a bunch of rock and roll royalty [like] Brian May of Queen, ZZ Top, Gregg Allman, a few guys from Guns N’ Roses and, you know, just a who’s who. Ozzy and Sharon saw us and Ozzy himself said we were one of the best bands he’d seen in 30 years. So, fast forward to when we were making our “Electric Man” video and our manager comes in and says, do you have five minutes? And so he sat us down and said we got the call. He had talked to Sharon in the morning and [told us] we got 100 dates, direct support, Black Sabbath world tour – their final tour. Jaws hit the floor. So yeah, that’s kinda the short answer.

Wow, that’s amazing. What an amazing opportunity for you guys to get out in front of even more folks, because I know you guys have played tons of festivals and have been road dogs for quite some time now. When and where was the first time you saw Black Sabbath in concert?

At the Espy Awards, 10 years ago. It was right when they reunited after a long time. It was the original band; it was Bill ward, Geezer Butler, Tony Iommi and Ozzy. And I could not believe how great Ozzy was! Well I mean the whole band was great, but you know, you see Ozzy in the media and I was like, is this guy gonna be able to sing (laughs)? And then he goes out there and kills it!

What was the first concert to ever went to, period?

(Laughs) Oddly enough, Boz Scaggs, with my parents. My dad is a guitar player and he was always very, super hip to who was playing on who’s album and he was into the studio musician thing. And so early on – in my first drum lesson – I was asking to play (Toto’s) “Rosanna” and so I was a super big Jeff Porcaro fan, and so he was the drummer of Boz Scaggs, so my dad wanted to make sure I got to see him in concert. I ended up seeing Toto live like three times and I’m a huge fan of Steve Lukather’s guitar playing; it’s kind of like my secret love, you know, because a lot of people think that Toto’s cheesy love songs, and it is, but it’s the best band to do it. So if you’re gonna listen to cheesy love songs listen to Toto cuz they’re the best (laughs).

Back to the Sabbath tour: the tour kicked off January 20 in Omaha, and it includes dates in Australia, Europe, plus a second North American leg, which winds up September 21 in Phoenix. How do you physically and mentally prep for such a long run of shows?

Me, personally, or the band? You want me to give you a general answer?

Well, actually I’ll start with a general answer. We all are married with kids, so we pride ourselves on being good husbands and good dads and family men. We basically get off the road and we dive into family life. That’s first and foremost. You have to invest in that; it’s hard enough on the road. But me personally, I study with Dave Elitch (The Mars Volta); he’s my drum teacher. I do CrossFit, I run, I trail run, I did a marathon and a half-marathon this fall. So I just stay in shape. To play drums for 90-120 minutes requires a lot of cardio. And also, drumming is very athletic, so if you treat it like a sport and warm up properly, warm down and ice. I read fitness magazines and sports magazines and I Google search how LeBron James trains and how he sleeps, and what kind of protein shakes Kobe Bryant drinks. I take it very seriously because I can’t get injured. I stay pretty busy.

It is! There’s a reason why so many musicians walk of stage soaking wet. 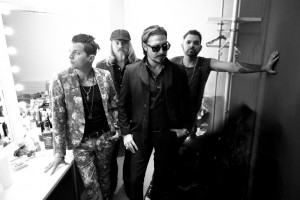 Finally, you guys have released four full-length albums. What can you tell us about the progress on the fifth record?

Oh yeah, I can give you a little hint. We don’t have a title yet. It’s actually being mastered right now in L.A. We’re gonna finish the mastering tomorrow and get that into production in the next four months for a May release. We basically went in and did what we normally do, which is record a song a day. We write and record on the spot – we don’t come in with any preconceived ideas of any song whatsoever. Jay has a lyric book, a poetry book, that he might draw from, but most of the stuff is written right on the spot to keep that kind of feel, that urgent immediacy that we feel rock and roll deserves. Somebody’s got to keep the dream alive, you know what I’m saying? The problem with why people say that rock is dead is because its lost that, like, danger, the visceral urgency. The immediacy of, like, when you hear the Small Faces, Humble Pie, Led Zeppelin, Cream, Jimi Hendrix, The Who, The Animals, The Beatles. The performances were raw and organic. Everybody is going back to organic. I think we are at the right place at the right time because we’re pretty seasoned at it now, and I’m really proud of the album. I can’t wait for everybody to hear it. It’s so raw.

Cool. Looking forward to it. Thanks for your time. Safe travels on the road, and hopefully we’ll get a chance to say hi face-to-face June 9 in San Jose.

An Interview With TERI TOBIN On Her Upcoming Tour, Her Current Music and More!