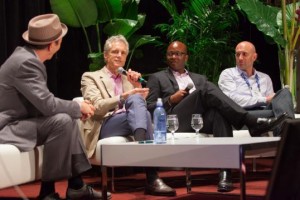 Following a whirlwind 2 days of all things music biz, we learned that this multi-billion dollar windfall that Tom is sincerely pushing for is likely to be earned out of at least one of three methods we identified as reliable new forms of potential steady income for musicians and industry professionals.  The first of these, thanks to the advent of digital streaming services like Spotify, Rhapsody, and Pandora is Sound Exchange, a non profit performance rights organization that collects royalties for music creators from digital music platforms.  Since their launch in 2003, the company has been able to earn a healthy 1 billion dollars in royalties for music creators to date. Big numbers like that have also earned the faith of many industry heavy weights at the seminar, including Tom Silverman, who talked about it in our interview. Sound Exchanges President Michael Huppe echoed that sentiment in a similar statement that the company released earlier this year.

“Sound Exchanges increasing annual royalty payments are a positive indication of where the industry is heading.  As digital radio continues to grow, so should the amount that performing artists and rights owners receive for the use of their content. Our distribution represents another record-breaking year for Sound Exchange, but more importantly, it means more money in the pockets of the creators of music. Were optimistic about the industrys future, and look forward to maximizing digital performance royalties for the people we serve and finding new ways to propel the music industry forward.”

The second method we thought should be considered was brought to the table courtesy of a fantastic digital music retail company known as HD Tracks. They provide what their name indicates; high definition versions of previously released album master tapes. They approach todays music lover as a niche consumer, who treats music as a specialty item that is to be audibly savored. It doesnt present the same kind of instant income potential that Sound Exchange does, but it creates an element of exclusive uniqueness for fans interested in treating their albums like collectors items. Because other specialty retailers like Jack Whites Third Man Records have been able to continually generate interest in its consumer base, we find that with the right marketing, HD Tracks could also turn out to be a staple source for music retail in the evolving digital landscape. 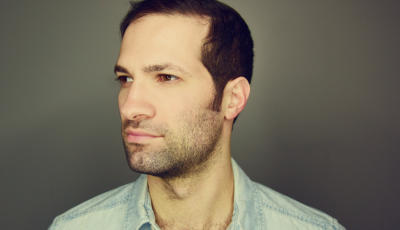 An Interview With The Americana Folk Singer-Songwriter, TODD LEWIS KRAMER!