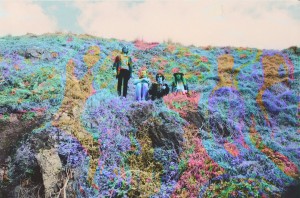 TSUN are a new band on the Byron Bay scene, their music resembles a soulful walk into the valley to lose your mind kinda trip. They are a unique fresh take on the psychedelic vibrations happening of late. These guys are definitely worth checking out! 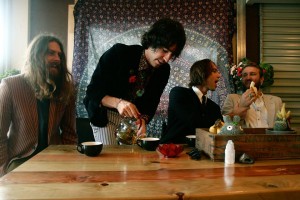 What is that TSUN vibe? How would you describe your sound to those not familiar with the band?

The Tsun sound is playful and psychedelic, eliciting inner space journeys and desert visions. Great sweeping swathes of guitar give way to twinkling music-box keys whilst the rhythm section slides along like a cotton-candy steamroller.

What is your favorite song on your album? Why?

Our most recent release is a 7” with two singles on it and currently I’d choose “Moonshrine” everytime we play it it just feels like i’m going on an adventure, not just into my mind but outer space exploration.

I love the band’s name. How did you come up with the name TSUN? What were some of the other names you were going to call your band?

Strangely, there were no other names. It began as ‘Sun’ and then one day the letter T just appeared and it all made sense, because it made no sense at all. It seems to imply, with one syllable, the impossible power of our nearest star and the beauty its light and warmth manifests.

Who is in your current playlist at the moment?

Do you have any hidden talents we don’t know about?

Jared has quite the god given talent for pranking, not just your average whoopee cushion more intelligent thoughtful pranks. The best pranker I’ve ever met.

How would you describe your show to people who have never seen you play live?

Bubbles, confetti and balloons drift in a sonic tsunami and carry you inside them to strange and beautiful lands of imagination and wonder. At times the sound is like a jet engine, at others like it shimmers softly as the cosmic firmament, but it is always transportive and beautiful.

If you could collaborate with any musician and also tour with any band, living or dead, who would it be and why?

The Flaming Lips have done some really interesting collaborations recently and we’ve long been admirers of everything they do, live and in the studio. If we’re pipedreaming though, I think we would all love to have worked with the Beatles in their psychedelic period or Syd Barrett era Pink Floyd because of the pure originality, experimentation and freedom of their music.

What was the first song you learned?

When I was a little boy my Nan was Venetian and she used to teach me how to play “Yellow Submarine” on piano and to badly sing back-up. She took the lead vocals in Italian and I had no idea what she was singing but the melody was still there and it was beautiful. It used to just end out us dancing around the room with the record on loud until my pop came in and turned it down.

Can you share any fun / crazy stories from the road?

Well, we slept in a few car parks last tour, but that was really a pleasure because we woke up beside the seaside.

What’s up next for TSUN?

Following our current single release and tour we will ensconce ourselves in a mountain studio to write and record more tunes for the world. There are some great touring opportunities on the horizon, along with some festivals and we hope to be playing our first international shows before too long.

The learn more about TSUN, visit them here

Pharrell Rocks It With Spike Lee