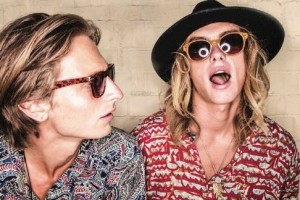 Sydney’s Lime Cordiale worked up a head of steam throughout 2013, with their breakthrough song “Bullsh*t Aside” and latest single “Sleeping At Your Door” turning heads throughout Australia. After touring right around Australia last year, the band have set their sights towards the USA in 2014 with the release of their acclaimed Falling Up The Stairs EP in February. The band is comprised of brothers Oli and Louis Leimbach, along with Australian drummer James Jennings and a collection of friends split between California and Sydney, Australia. 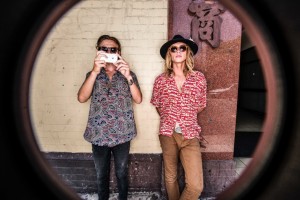 The last 12 months have seen Lime Cordiale perform to receptive audiences throughout Australia, including sold-out headline performances in Sydney, well-received sets at Australia’s biggest music conference BIGSOUND, Homebake, Peats Ridge and Deni Blues festivals, and gigs alongside the likes of The Rubens, The Specials (UK), Ball Park Music, Hey Geronimo, The Griswolds and most recently, as main support on Cosmo Jarvis’ (UK) national tour throughout Australia.

Lime Cordiale were one of a small handful of Australian acts to showcase at SXSW Music Festival last March. Their emphatic live set drew undeniable praise from a number of US tastemakers, with the likes of Zimbio, Buzznet, CMJ.com and SXSW.com featuring the band over the course of the festival.

Drawing from their classically trained background and experiences from their formative teenage years, Lime Cordiale create strong pop music with a fresh sound. At first the music seems to span a wide range of genres, but it soon becomes apparent that Lime Cordiale have created a distinct sound and strong style that belongs to this band alone.

The music video was a collaboration between singer Louis Leimbach and animator Matt Schembri (wolfboy).

The duo spent a couple of weeks scanning about 250 of Louis’ artworks and sent them to Matt down in Melbourne. Matt then spent about 3 months building the 3D worlds before slotting in Louis’ art.

‘Hanging Upside Down’ is the first single to be taken from the bands studio sessions with Sydney-based producer Jean Paul-Fung (Jinja Safari, Art Vs. Science, Glass Towers).

The band is also incredibly psyched to announce that they’ll be heading out on a national tour (with support on all dates from cruising troubadour Lyall Moloney). The Hanging Upside Down Tour is going to hit Sydney, Melbourne and Brisbane throughout February.

Louis Leimbach (vocals / bass) fills All Access Music Group writer, Nicole DeRosa in on what it’s like being in a band with your sibling, touring adventures and the band’s love affair with Chipolte.

How would you describe your music to those who have not had the pleasure to be introduced to your sound?

A bit of quirky beach vibes with some big horn licks. Something to groove to. Our live shows definitely give the best impression of our sound, so punters get the best of it.

Where did you all grow up? How did your location influence your style?

Oli and myself are brothers from the north of Sydney in Australia. We’re both surfers, so maybe that has something to do with it. Our drummer is from the country where he banged on cow poo for most of his early life.

You guys recently decided to make the move and relocate to Los Angeles to support the release. How has that been so far?

Well we haven’t quite moved there. Not yet anyway. I think our manager keeps spilling that rumour around but it’s a nice thought. We have spent a few months over there so far and we plan to head back a few more times this year for sure. It’s been great so far. Intense, and full of super nice, creative people. Super nice burritos too. Beautiful people and a great music scene.

What’s the vibe of your new album?

There are definitely some dancey numbers on there. It goes well blasted loud with some beers, sun and nudity. Something to pump you up a little bit but also something that you can relax and read a book or study to.

What’s your favorite song on the album and what was the influence?

My fave is ‘Everything Else’. It was a last minute song that was writte specifically to add to the EP. It was influenced by a bit of Tame Impala and Whitest Boy Alive.

If you could meet any musician that isn’t alive anymore, who would it be? Why?

I think they’d all intimidate me too much but probably MJ. I recently watched the doco “Living with Michael Jackson” and he just seems like an entertaining fruit loop. Who writes amazing music of course.

You guys have some great pictures on your Instagram that show your fun tour adventures. Can you share with us any memorable stories from the road?

A friend of ours was meant to put us up in her house on the road once and she got far too pissed and passed out. We literally had to sleep on the sidewalk and it was F**KING cold! A homeless person did a poo next to us. Also, we always stop for nudey swims.

A chef, A never ending book, a friend.

What is the funniest thing that has happened to you recently?

I got a tattoo of a trumpet on my bum when I was drunk in Texas for SXSW. It’s pretty bad…

Being in a band, you spend ALOT of time together. Would you like to share the latest quarrel with us? ; p

James (our drummer) has OCD and Oli and myself are pretty sloppy dudes so sometimes he gets angry when WE don’t shower enough. Sometimes I will leave it a week just to see how he will deal with it.

What types of things do you do when you are not playing music?

Surf, have good food and parties with friends, see live music, paint, go to uni, work crappy jobs, worry about money, road trip up the coast, do a trip.

I do all the artworks for Lime Cordiale. Oli is a super great actor, editor and director.

At the moment we are writing lots of tunes and are just about to go back in the studio. Next week in fact. Then the following week we head back to the USA to eat lots of Chipotle. Then back to AUS to tour the next release then back to the USA again (mainly for Chipotle). Hopefully Canada at the end of the year and the UK at the start of next!

To keep up to date with Lime Cordiale, visit their website here.

A Look Back On The 2014 Billboard Music Awards