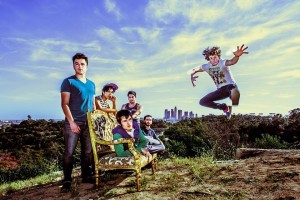 Trapdoor Social is Merritt Graves and Skylar Funk, and they are here to save the world.

Merritt and Skylar met at the Environmental Analysis program at Pomona College in Southern California. By day they studied the challenges for planet Earth, and by night they found refuge in their music. Unfortunately, Climate Change has become a large source to draw from musically, says Merritt. We try to take our anxiety over it and transfer it into a sonic medium.

But we do it in different ways, adds Skylar. Merritt channels his frustration when he writes, while I draw a lot more from empathy. I think it would be pretty boring if we weren’t so different of people. What results is a driving, emotive alt-pop experience.

While hustling and promoting their work in the busy Los Angeles music scene, Trapdoor Social walks its talk, with continued involvement with green companies Farmscape and Agrisaurus, which Merritt helped create, and the development of an awareness campaign around solar and other renewable energy. No issue is too big to try to grapple, says Skylar. We should all do what we can.

The duo made its official debut with the six song Death Of A Friend EP, released in December 2012. It was produced by Curt Schneider, and features Death Cab For Cuties Jason McGerr on drums.

All Access Music Group writer, Nicole DeRosa recently got to ask the boys a few questions. Check out their Q&A below.

How would you describe your music to those who have not had the pleasure of being introduced to your sound yet?

We are an alternative band but feel it’s hard to fit a specific category. Strong melodies and instrumentation are important to us, and we believe we’re a band that also has something to say in terms of lyrics and our causes. 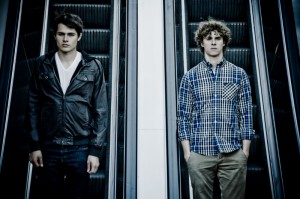 How did you guys meet?

Merritt: We became friends in the Environmental Analysis program at Pomona College in Claremont, CA, staying up late doing homework in the computer lab.

Where did you grow up?  How did your location influence your style?

Merritt: Skylar grew up in Seattle and I grew up in Iowa City.  My location in IC influenced me by omission.  There wasn’t a whole lot of my kind of music coming through, so I think I was kind of a late bloomer as a result, not really getting excited about it until I was 13.
Skylar: I grew up listening to 107.7 The End in Seattle, and playing in band and doing theater in school. Only recently have I finally begun to mix these elements in my music. 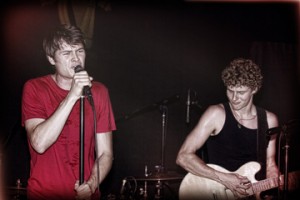 What’s the vibe of Trapdoor Social? What could we expect at your shows?

Shows are exciting for us because we get a lot of energy from our friends and fans, and I think you can feel that when we’re on stage.  We also use the concert as an opportunity to talk about things we care about like solar energy and technology’s rate of change.

What’s your favorite song that you guys have written and what was the influence?

Merritt: Science of Love’s probably my favorite and it was inspired by the idea Technology has started speeding up faster than we can react to or even understand.  If you ask around, I don’t think people would say that they’re really glad that the poverty rate in America has been rising as more and more good jobs get eaten by automation and algorithms, or that they’re pleased that sea levels are rising because we had no idea what effect dumping billions of tons of carbon would have. It’s simply happening because the technology is happening.  Our goal with the EP is to have a conversation since right now it seems like we’re just passengers blindly putting our destiny in the hands of a force with no sense of right or wrong, fairness, or concept of human well being . . . which is completely insane.

Skylar: Old Wings is my favorite song on the EP. I wrote this one for my dad – he designed airplanes for Boeing for as long as I’ve been alive . . . then just a few years ago he decided what he really wanted to do with his life was fly. So he worked tirelessly for the last 5 years to get his certifications, hours and training, and finally changed his career and is now a 737 Test Pilot. I am inspired by his passion and drive to follow his dreams, and I wrote the song around that phrase he gave me – “Old Wings”.

Skylar: I was pretty crushed when I heard “Give Up” by Postal Service for the first time since my brother left for college… it reminded it me of him because he had played that album all summer, and I was missing him pretty badly already, so when that music started playing I had a huge reaction. That’s what I think music does best – make us feel.

Beethoven so we could ask him how he was able to conduct his 9th symphony when he was deaf.

How has the tour been so far? How has life on the road been treating you all?  Can you share with us any memorable stories from the road so far?

It’s been really good.  Kind of amazing actually how well everyone’s gotten along. I guess we should wait and say that in three months after we’ve gotten back from this next leg of the tour.  Funny stories . . . well Merritt’s cat pissed on his Science of Love jacket and he wore it for several shows after because there wasn’t any time to dry clean it and it was the “coolest” thing he had.  Also, we had a jam session in the street after our show in Manhattan… we drew a pretty enthusiastic little crowd, and it rained on us, and our friend Teresa was there dishing out slices of fresh pie, and this lady with an unbelievably massive booty came out of a nearby club and danced with us. It was unforgettable.

What is in your current music playlist? Any guilty pleasure songs?

Merritt: Lately I’ve really been liking White Lies and Paper Route.  I guess a guilty pleasure song would be “Only One” by Yellowcard or something like that.

Skylar: As far as guilty pleasures, I can’t help but mention our favorite song to cover acoustically lately – “Call Your Girlfriend” by Robyn. Or as we perform it, “Call Your Boyfriend”…

If you were  not in the musical industry or musically inclined, what else would you be doing?

Merritt: I’d be spending more time writing.  I’m currently finishing up a novel set in a near future with 70% unemployment because of robotics and algorithms, where everyone is genetically engineering and augmenting themselves to be competitive for the few remaining jobs.

Do you have any hidden talents we don’t know about that you would like to share with our readers?

Skylar: I’ve made about 17 batches of hot sauce in the last year and a half, and I’m bent on perfecting the craft before Christmas of this year. Get on my good list and you may just end up with a bottle in your stocking 😉

What’s on tap next for Trapdoor Social this year?

Expect a double album later in 2014 and another full length in 2015, which we’ll be releasing as a fundraiser for a community garden project/solar project. We have a lot of new songs we’re excited to share.

To learn more about Trapdoor Social and get exclusive updates and an unreleased song from their upcoming album, visit them HERE

An Interview with The Multi-Talented Musician, Heather Reid

Jake London’s Short But Sweet Set Impressed All At The Mint! 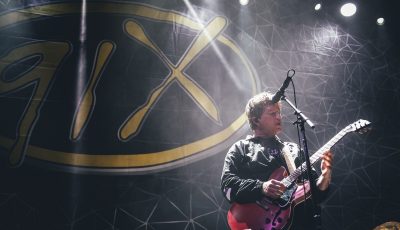 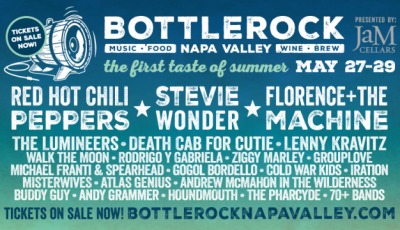