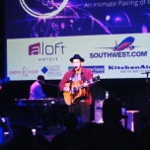 Nick Jonas at Live in the Vineyard in Napa Valley, California.

It has only been less than a week since the Jonas Brothers confirmed the rumors of their break up with People Magazine and ABC’s Good Morning America, but Nick Jonas is back to playing music again! E! News has reported that Nick performed his first solo show since the break up Sunday night (November 3rd) at an intimate show at Live in the Vineyard in Napa Valley, California.

“I love my fans and am so blessed to have you and am so blessed to have you. Thank you for everything.” He later posted a video of himself singing the Avicii’s hit single, “Wake Me Up ” from the performance on Instagram. Everyone has been talking all about the disbandment of the JoBros these days, but it is no surprise that Nick would be the first of the trio to step back on stage and perform again. Many have considered Nick the musical foundation behind the group’s sound, he was even serving as the primary producer on the group’s cancelled fifth album V. His production can be heard on the group’s two recently released singles, “Pom Poms” and “First Time.”

To get an idea of what to expect from Nick Jonas as a solo artist, all you have to do is be reminded that he released the album, Who I Am in January of 2010 as part of his side project, Nick Jonas And The Administration. The album was a dramatic musical departure from the Jonas Brothers’ “Pop/Punk” production style, sounding more like a gumbo of Blues, Rock, and Blue Eyed Soul.

For more details on The Jonas Brothers’ break up, and a look back at all they have accomplished head over to Clizbeats.com!!