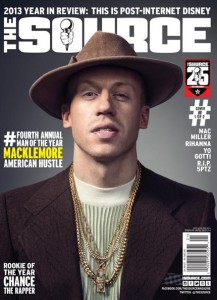 Macklemore On “The Source” Magazine

Seattle’s superstar duo of Hip Hop, Macklemore and Ryan Lewis had an incredible 2013, and now The Source Magazine has made it official by naming Macklemore their man of the year.  This very definitive accolade is well deserved and caps off the duo’s truly unique journey of independently earned success that began to hit its stride only a year earlier. Released through their own Macklemore LLC company, the mega success of singles like “Thrift Shop”, “Same Love”, and “Can’t Hold Us”, showed that a whole new, previously unreached potential was possible for independent artists that are looking to influence the mainstream.

That influence in Macklemore’s case, pushed each of those singles very well past the multi platinum status, and helped the album as a whole also go platinum in five countries, and gold in two others. In this decade, where the digital sales patterns emphasize single purchasing more and more, these whole album certifications would be an amazing achievement for any artist. However, because Macklemore and Ryan have run their operation entrepreneurially, giving themselves and their grass roots born music the undivided attention needed when serving as their own label, they also are also likely to have walked away from that hard work with a much bigger piece of the profit pie as well.

Just based on what we’ve seen, artists, labels, and anyone in a creative content business should take notes on how they achieve such a massive return on their investment. Following the duo’s indie start, they were able to spin a buzz from their highly viewed, well-produced music videos, and ground swell of fan support, into mainstream exposure that could quite possibly serve as business model precedent from here on out. Sure of what they had, and more importantly in this case, what to do with it promotionally, Macklemore and Ryan Lewis were able to maintain creative control and ownership of their hit album, while also brokering agreements with key departments at Warner Music Group to handle PR, and radio promotion. This is an achievement because although indie deals like this have been made before on a lower scale, none of them have made the chart topping impact that would allow The Source or any other mainstream music publication, network, or show to call those artists “person of the year.”

A great comparative contrast that shows Macklemore and Ryan’s power over industry trend change for artist can be seen in the recent Capitol Records signing Mary Lambert.  Although we put both her and her single “She Keeps Me Warm” “on the radar” here on All Access back in the summer when she was an indie artist, her track record of constant mainstream media and touring exposure, thanks to her major creative role on “Same Love” allowed her to transition to from an art loving niche artist known mainly in the poetry circuit of Seattle, to becoming someone at a shot at her own major label shot at stardom.  If she ends up being successful, there is no telling what Macklemore and Ryan Lewis’ mold breaking could lead to next.

To check out more details about Mary and her heartwarming track “She Keeps Me Warm” click here!

An Interview With the Grammy-Nominated Singer-Songwriter RAY DALTON On New Music, Working With Macklemore & Ryan Lewis, Favorite Artists And More! 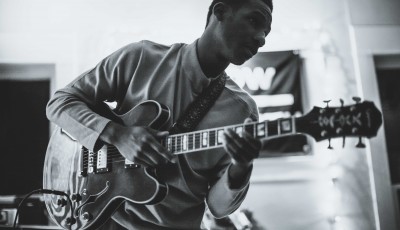