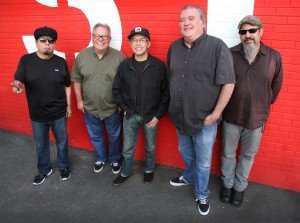 Originally built in 1916 as a 1500-seat silent movie theatre, the recently renovated UC Theatre in Berkeley is now a shiny new jewel in the heart of the city. Originally born in East Los Angeles in 1973, the foundation and founding members of Los Lobos are still the pride of their city and continue to shine on stages across the globe. On Friday the 13th, the not-so just another band from East L.A. lit up the now-chandelier strewed UC Theatre with a festive set of songs that had everyone in the beautiful building dancing and singing along.

Los Lobos – Cesar Rosas, David Hidalgo, Louie Perez, Steve Berlin, Conrad Lozano and Enrique “Bugs” Gonzalez – immediately set the tone and tempo of the night with the toe-tapping, hip-shaking opening number “Evangeline.” The band didn’t lift its collective foot off the sonic throttle until wrapping the night with a mind-blowing medley of an encore that included The Who’s “My Generation,” The Rascals’ “Good Lovin’” and their signature show-stopping rendition of the Ritchie Valens mega party anthem “La Bamba.”

Throughout the set – while the crowd took full advantage of the several shiny new, well-stocked and friendly serviced bars situated around the beautiful venue – the band stirred the sonic spirits with shots of their huge hits “Don’t Worry Baby,” “Kiko and the Lavender Moon” featuring Hidalgo on accordion, their take on the Little Bob 1965 chestnut “I Got Loaded” (found on their 1984 major label debut How Will the Wolf Survive?) and their version of the Grateful Dead ditty “Bertha.” 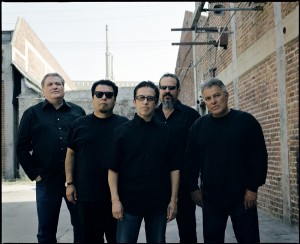 Of course no Los Lobos show is complete without a healthy helping of cumbias and Mexican classics, and the band didn’t disappoint. Feet were moving and throats were in full force when the band broke into “La Venganza de Los Pelados” and perhaps the ultimate sing-a-long, “Y Volver Volver.” And as if all of these disparate musical styles weren’t enough for one fabulous show in a spectacular setting, Los Lobos treated those in attendance to a super funky take on The Temptations’ masterwork “Papa Was a Rollin’ Stone” and a rockin’, bluesy version of The Allman Brothers Band roof-raising “One Way Out.”

And speaking of roofs, here’s just a bit more on the freshly refurbished UC Theatre, which lay shuttered since 2002, but after a 14-month reconstruction is a top shelf concert venue. General Manager Matthew “Smitty” Smith told me Friday’s Los Lobos show was just the sixth performance hosted by the room since the renovation was completed. Booker Michael Bailey, who also books the legendary Fillmore in San Francisco, has already secured a stellar list of upcoming acts, including Gogol Bordello, The Rides featuring Stephen Stills, Kenny Wayne Shepherd and Barry Goldberg, Joe Jackson, The Psychedelic Furs and Ani DiFranco, among others. Visit Theuctheatre.org for complete details. 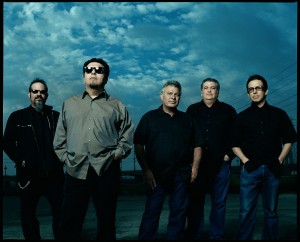 Finally, I couldn’t end the night without speaking with one of the contractors responsible for transforming this historic house into a modern marvel. I asked Javier Acha of Acha Construction in Vallejo, CA, what role he and his crew played in the renovation process. He rattled off a litany of tasks he completed in the renovation job, but when he got to his role in running the hoses that feed the beer to the bars, I quickly interrupted and joked that, aside from the super sound system, he had the most important job of them all: making sure the beer got to the taps and into the guts of thirsty fans. He laughed, reflected, and said, “Yeah, I guess so.” After Friday’s show, I’m convinced there will be lots more great nights of hot music and cold beer on tap for this historic haunt.