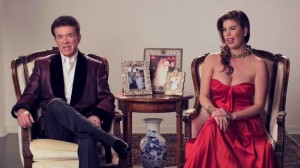 R&B singer Robin Thicke and his family are in the news a lot these days thanks largely to his very public split with Wife Paula Paton. Recent marital ups and downs aside, there were some good Thicke family antics to talk about too. The biggest of these is Unusually Thicke, the TVGN “reality” show  based around the life of Robin’s famous father Alan, his younger step brother Carter, and Alan’s wife Tanya.

Just like Robin’s BET show The Real Husbands Of Hollywood, Unusually Thicke is a heck of a lot of comedy built around the basics of  his dad’s real life family setting. In fact, when you look at the trailer, you’ll see that the show almost serves as an excuse for the family to do elaborate skits with one another, and those skits just happen to be shown on TV afterward. In a sense, Alan is capitalizing on Robin’s re-popularizing of the Thicke name in order to spin off into a new opportunity that gives lessor known Tanya and Carter an opportunity at their own kind of stardom.

To check out more about Unusually Thicke Click here.

This is funny to us, because we saw first hand that when Robin first started out, one would always have to lead with phrases like “son of Growing Pains star, Alan Thicke”  when doing mainstream press with him. Now, at least in many circles, the roles have clearly reversed. Robin boosting dear old dad isn’t anything new though. From what we’ve seen, working together has always been  something the Thicke family has always done.

In the past, Alan and Robin’s brother Brennan helped him get his music career going, co-writting with him and Jordan Knight of New Kids On The Block,  for Jordan’s 1999 solo album track, “Separate Ways,” when Robin served as one of the album’s primary producers along side Jimmy Jam and Terry Lewis. Alan has also worked with Robin on his Blurred Lines album, co-writting the album cut “Ain’t No Hat 4 That”

Robin talked about his father helping him get into show biz when doing an interview for the Seacrest Studios charity while he was visiting with cancer patients at the Children’s Hospital Of Philadelphia. We found the video quite heart warming and thought you would too. Click here to check it out.