At the start of their aptly titled classic concert collection Alive! they were famously introduced as “The hottest band in the land.” Many would argue they are the leading live act on the planet. Few would disagree that they put on one of the biggest – and hottest – live shows ever. Bottom line: Kiss is HUUUUUUGE! So why would they want to turn back the clock and play smaller markets – including four towns they’ve never performed in – on their forthcoming “Freedom to Rock” summer American tour?

“We wanted to roll up our sleeves and do what we’ve always done, which is tip our hats to the people who put us here in the first place,” says bassist/vocalist Gene Simmons. So where is “here?” “Here” is the fact that Kiss isn’t just the “hottest band in the land,” but the group happens to be the Land of the Free’s #1 Gold Record award winning band of all time. “Here” is the fact that Kiss has sold over 100 million albums worldwide. “Here” is the fact that Kiss is enshrined in the Rock and Roll Hall of Fame.” But “here” is also Boise, where the band will kick off its 35+ city tour on July 7. I recently spoke with “The Demon” of rock about the upcoming “Freedom to Rock” tour, the band members’ unwavering support of veterans, the “Kiss Army” and much more. 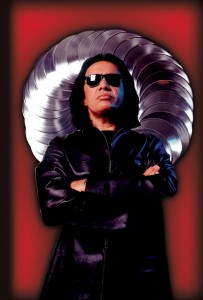 Gene, good morning. How are you?

Let’s chat about this stretch of shows you got coming up. You’re calling the upcoming summer trek the “Freedom to Rock” tour. Is that a patriotic or political statement, or neither?

Everything we do is patriotic, but the real story here is we decided to do about 40 cities – July through September – as an homage to cities that don’t get the respect they should. Everybody always talks about New York, London, Paris and all that stuff. The way we [Kiss] happened is we went through middle America and played places like Ypsilanti, MI that don’t always get the headlines in the newspapers, and we wanted to roll up our sleeves and do what we’ve always done, which is tip our hats to the people who put us here in the first place, which is why we’re coming to you. We’re gonna bring the gigantor tour – maybe of all-time – that people haven’t seen, and we intend to shake the heavens! That’s what we do.

The trek gets underway July 7 in Boise and it’ll hit a lot of smaller markets, as you mentioned. In fact there’s certainly not a Detroit-sized like rock city on the itinerary this time. You touched on why you guys are playing small town this time; tell me about some of the towns that you’re hitting that you’ve never hit before.

Well we’re going to Sioux City and places that have great coliseums where more people show up at the coliseums and the stadiums than actually live in the town. Thy come from the surrounding hills and surrounding areas. So, literally, Lincoln, NE has a stadium in it, but the city has under 100,000 people in it, and yet, when people come to watch the football game 100,000 people show up. You know they come from the outlining areas. And the fact that there’s a football stadium there actually qualifies it to be a city, because you have to have at least 100,000 people to be a city. Look, people are people and where you’re born is where you’re born, and we don’t play the game of, you know, we only play Paris and London and New York. That’s nonsense.

Tickets just went on sale at Kissonline.com. Will the ticket prices be more small town-like as well? Will they be a bit more affordable?

You bet. We’re gonna be under whatever the average is. Very affordable. I don’t have the specifics in front of me [you can find out at Kissonline.com.]. And then we have the special backstage stuff where you get an additional unplugged show, photos and popcorn farts and all the rest of the stuff (laughs). But before then, if you’re curious, 1000 motion picture theaters around the country are gonna be showing on May 25 the Kiss Rocks Vegas concert film that we did. You’ll be able to see that in movie houses around the country, and in thousands of other movie houses around the world, actually. 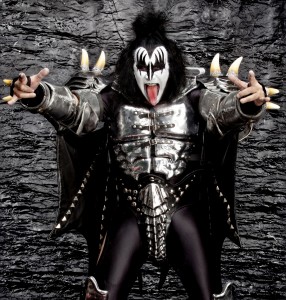 I was gonna bring that up a little later in the conversation, but since you did, I’ll just say that people can go to Fathomevents.com to get more information on, well, a theater near you!

And when you’re in Las Vegas you can go to the Rio Hotel to see the Kiss golf course, which is blacklight, and it’s quite an experience. We have 30-foot high statues of our faces with moving part and smoke and my tongue’s hanging out; lots of fun stuff.

Everything’s about size! Your girlfriend’s been lying to you; size does count.

(Laughs) Yeah! And by the way, I don’t talk to my wife about my girlfriend! But that’s for another conversation (laughs)….

…which you and I have had in the past, I’m sure (laughs). I wanted to ask you about the tour: are there unique logistical challenges, as far as staging, lighting, travel?

Good point. The challenge is always having enough space over the stage to make sure we can safely hang our lights system and our special effects and the flying rigs, because for those people that were born under a rock – and I don’t mean Saddam Hussein – we actually fly through the air and our drum platforms levitate and Paul (Stanley) flies off the stage to the back of the hall. So all that stuff’s gotta be figured out. But that’s why we have the best crew in the business. You know when you see the Stones or U2 and you see stage shows that are impressive, trust me, they’re using our crew. The Kiss crew is well known around the industry for being the best.

I’ve had the pleasure of working with you guys throughout the years; everything from seeing you guys full-on at the tiny Troubadour in Los Angeles all the way to Dodger Stadium on Halloween…

A 3-D show, by the way. You got your glasses, you put them on at certain parts of the show and you saw 3-D.

Yeah. I was working at The Album Network at that point, so I was lucky enough to be part of the production crew that put that out on radio. You guys will have two different opening acts during various stretches of the tour. For fans who don’t know them yet, can you talk a little bit about Caleb Johnson and The Dead Daisies?

Caleb Johnson won American Idol and we appeared with him on the big finale. He’s a legitimate guy. He’s a legitimate rock singer, and for those of you who watch American Idol you’ll hear him rock out. The Dead Daisies is made up of various members from various bands: Motley Crue, Guns N’ Roses – lots of cool bands. So the various guys from different bands got together, and so we thought we’d give The Dead Daisies a shot. But we’ve always done that. Throughout our history we’ve given new bands their first tours. And the list, perhaps, would be surprising to people. Let’s see, the first tours we gave people are AC/DC, Bon Jovi, Motley Crue, Judas Priest, Iron Maiden, Rush, Cheap Trick; almost anybody you care to mention, we gave them their first tour.

Wow! You could almost say AC/DC to ZZ Top – A to Z, practically.

Well we played with ZZ, but they’d been around for a long time.

Yeah, sure, of course. So you mentioned at the top of our talk, when I asked you about the name of the tour, that everything you do is patriotic. That said, I know you guys support various veteran’s organizations. Will there be an opportunity for fans to get involved at venues along the way to lend their support?

Sure. You know we also have our Rock & Brews restaurants across the country and in Mexico. You can go to rockandbrews.com to find out if there’s one near you, and what we do at all our Rock & Brews is – on the opening day – we close to the general public and only invite veterans in. We honor them, we feed them and we give them a big fat check as a small token of our appreciation for their service.

I’ve gotta imagine members of the “Kiss Army” would be eager to enlist to help veterans out.

Well everybody can really do their part. The astonishingly patriotic thing that our veterans do, first of all, is they volunteer ‘cuzz there’s no draft. So our military is a volunteer military. They risk their lives, limbs and psychological health going over there, and some pay the ultimate price. And when they come back I think all anybody’s looking for is a job. Not parades or not to get rich, and those of you who are in a position to be able to give jobs, you should. Who else would be a better part of your team than somebody who’s risked their life going overseas for something. They’d be your best person on the team. So we hire vets, Rock & Brews hires vets and we do that – how ‘bout just for selfish reasons – because there’s nobody better. 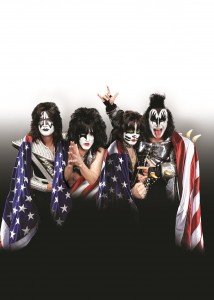 I believe the statistic is less than one percent of the nation’s population are the folks who serve.

Well, Gene, I’m gonna wrap with just a couple more notes here. I know you well; we go back a long time, so I might be opening up the possibility of taking up a lot more of your time by asking this question: is there anything else you’d like to promote, other than what we’ve talked about today?

Really the most important thing is to make sure that people know we’re coming to your town. You’re not gonna have to travel to Chicago or New York or L.A. to see a big show. We’re gonna be bringing the biggest thing you’ve ever seen and we intend to literally shake the heavens. Some of the places are outdoors – the big stadiums. Some of the places are indoors. They’re all sizes, all shapes. The outdoor ones obviously we’ll be able to spread our wings and have fireworks that go up 200 hundred, 300 hundred feet. We’ll inform local airports not to have low-flying planes ‘cuzz we’ll literally knock them out of the sky. Clearly indoors you’ll have to buckle up because it’s gonna be one helluva time.

We’re looking forward to it. Thank you very much, Gene. Always a pleasure my friend. Safe travels. Good luck on this tour.

Listen as Country Superstar, CHRIS YOUNG Discusses His Newest Album, “I’m Coming Over”, His Upcoming US Tour, Performing On A Plane With Cassadee Pope and Much More!

Listen As Comedian AND Musician JON LAJOIE AKA WOLFIE’S JUST FINE Talks About His Debut Collection of Music, His Debut Music Video For “It’s A Job”, Growing Up with EIGHT Brothers and Sisters and More! 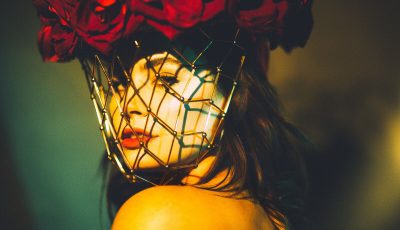 An Interview With Singer-Songwriter Sophie Simmons About Her Debut Original Music, Being on X-Factor, Lessons Learned From Her Famous Parents and More! 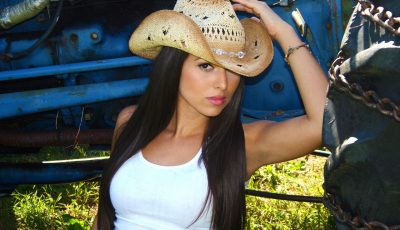