Wow, what an amazing concert! Talk about thrills, spills, and good old fashioned straight up partying, that’s what Saturday night was at the KISS/Crue Concert. Everyone there certainly did Rock-N-Roll All Night. It was like one big giant party from start to finish and I don’t think one person left disappointed.
Let’s start by saying, the 2012 KISS and Motley Crue Concert Tour at Darien Lake in Western New York between Rochester and Buffalo on Saturday Night almost didn’t happen. Yes the “last show of the season”, as Paul Stanley explained almost never happened. But why? Well apparently a large part of the KISS stage show was destroyed in some sort of accident a week prior to the show and they had to order new stage gear for this show. Additionally, Vince Neil broke his foot prior to the concert; however as all good performers he refused to let the fans down. In fact, he still moved around quite well even with the broken foot and put on a great show.
I was the designated driver so I thought I was in for a boring evening, but quite the contrary. Initially on the ride into the concert we saw six guys scrambling down the street and through the woods. We thought they were looking for a place to go to the bathroom until we noticed that they were emptying their pockets and trying to hide something. Then I saw the cops coming, however it took me a minute to recognize them because they were chasing the guys in a golf cart with sirens on it LMAO :-). All I could think was how embarrassing it must be to tell everyone that you got busted by Mr. Magoo in a Golf Cart LMAO :-).

Once we got into the show and Motley Crue took the stage I didn’t even realize I wasn’t drinking. Strange thing though, I still woke up with a hangover the next morning 🙂 Of course that could have also had something to do with the strange aromas that I seemed to be in the direct path of from the guy next to me.  I’m pretty sure that if I was to have been given a blood test it might have shown traces of THC 🙂
Motley Crue went on to play many of the great hits we all know and love such as Livewire, Girls, Girls, Girls, Wildside, Home Sweet Home, Dr. Feelgood, Girl Don’t Go Away Mad, Girl Just go Away, Shout at the Devil, and many others including a new song “Sex” which was great and had a funny story behind it too. I was a little disappointed not to hear Looks That Kill, but when you have that many hit songs, you just can’t play them all.  But they made up for it with all the sexy scantily dressed women on their stage, especially the one in tassels, that was my favorite.
There were a few moments during Motley Crue’s performance that specifically entertained me. First off, Vince Neil appeared to have forgotten or just didn’t want to be bothered actually singing a portion of the chorus for Girl Don’t Go Away Mad. He just kind of sang the notes without the words. It was really funny. Then towards the end of their set, it appeared that Nikki Sixx was puking. I’m not quite sure on this one, but he hunched over multiple times and liquid came out of his mouth. This is the only reasonable deduction I could make 🙂 and finally upon the introduction of their new song “Sex”, Vince asked people for a show of hands as to how many people liked sex and he proceeded to volunteer both of his hands 🙂 LOL. One last note, I was really looking forward to Tommy Lee’s Boob Cam but he didn’t bring it out 🙁 I think the women on stage were supposed to make up for the boob cam, but I’m not really sure this is something you can replace 🙂
All things considered, Motley Crue Spared no expense, was considerably funnier than I expected, we got to see strippers and they put on a great show.
Moltey Crue New Release “SEX”

Let’s pause for a moment, to reflect on the irony of this concert. In Motley Crue’s early years they had kind of a KISS theme going for them and would have certainly appeared to have been influenced by KISS. Today, there is no longer any signs of that influence. But even more ironic is the work ethic and responsible professionalism of KISS vs. their counter parts in the Crue. The KISS show was certainly a PG-13 show while Motley Crue was an easy R rating. I was just imagining Gene Simmons backstage scolding the young rabble rousers for their actions 🙂 But not to take anything away from them, Nikki Sixx is a well respected and highly talented writer and his band Sixx AM is pretty awesome too. Funny how the brains behind both bands seem to be heavily in favor of the bass players (I used to be a bass player 🙂

After some brief recovery time and chance to take a leak from all the soda I was drinking, KISS entered the stage in their usual fashion, “Larger than Life”. They started their set with Detroit Rock City and rocked the house followed up with songs like Firehouse, God of Thunder, Love It Loud, War Machine, Lick it up, Love Gun, Doctor Love, Rock and Roll All Night, and many others. And No, they did not play Beth. I know I said the same thing, “AAAAAAWWWWWWWHHHHHH” but they were great anyway and showed everyone what legends are made of with a perfect show. They were so good, that you could close your eyes and you would almost think you were listening to the album. Whoops, I meant CD 🙂
KISS gave us all exactly what we expected, with plenty of moving platforms, amazing HD backdrop screens that even made their logo look like real lights while Gene Simmons did plenty of tongue flickering, fire breathing, and blood spitting as only as Demon or Bat Lizard would do. I’ll tell you, after watching Gene Simmons on the family Jewels I never thought I could take him seriously again, but he really sells it and when you see him perform, you really think he is a demon. Paul Stanley did his normal Lover/Star Child move and kept the audience engaged with great story telling, singing, flying through the air, and interaction. Ace Frehley (Whoops Again) I mean Tommy Thayer was shooting flames from his guitar and Eric Singer’s whole drum set platform rose into the air in remembrance Peter Criss’s KISS Alive II. They finished their show with Rock-n-Roll All Night as should be expected with Paul smashing his guitar to close the show. Awesome!

In closing, the way I see it, there are two reasons you are not supposed to have two major national headlining bands playing together on the same night and no, one of those reasons is NOT Ego. Reason number one is because one band is usually just that much more popular and draws the majority of the people. So they usually pair up with a semi-popular act with a few good and familiar songs to warm up the audience. Reason number two, is because of what happened Saturday Night when Motley Crue and KISS took the stage. Simply pure power house, badass , intensity, overload. Just when you thought it was time to go home because you had been red lining it for about 2 hours, it was time for round 2. Each one of these bands could have simply headlined a show by themselves and it would have been enough for every fan in attendance. However, they hit you with the double dose and literally blew you away.
I also should mention that Testament was actually the official opener, but even they could have had their own show with their following from over the years. I didn’t even want to see that performance because I knew two was enough, I couldn’t even imagine three.
If you haven’t seen these guys, I strongly recommend checking out the show the next time it comes to your town. 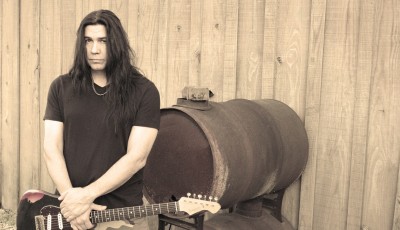 ALMOST HERE: MARK SLAUGHTER’S SOLO SET HALFWAY THERE DUE MAY 26 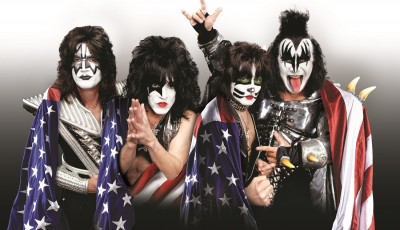