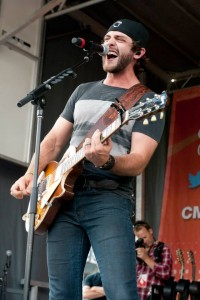 The Valory Music Co. artist Thomas Rhett made his CMA Fest debut as an artist last year during the 2012 CMT Awards. This year, Rhett is a familiar name that can be found on stage at the 2013 CMA Festival’s BMI Tent, as well as on tour with Jason Aldean and Jake Owen on Aldean’s “Night Train Tour.” His current single on Country radio is “It Goes Like This.” Rhett took some time to tell us about his eventful year and his current single. Read here to see what he had to say:

JC: We are here with Thomas Rhett — Thomas, you are getting ready to play here at the BMI tent. This CMA Fest is a pretty big one for you! Quite a bit has happened in the last year. Can you tell us a little about the emotion you have going into this year’s event?

TR: Well, this year is A LOT different than last year! The first time I walked the Red Carpet ever was at the CMT Awards last year (2012). I had one song on the radio and nobody had any idea who I was. It was definitely more nerve racking last year. This year is a relaxed feeling. You just dress up. My wife is definitely more relaxed on the Red Carpet. This time, I have a lot to talk about. I have written a couple big songs this year: “1994” for Jason Aldean, “Parking Lot Party” for Lee Brice and Florida Georgia Line’s new one, “Round Here.” I’ve also got my own single on the radio, so I have a lot to talk about.  I’ve just really developed more as an artist, a songwriter and an entertainer/ performer. It’s just one of those things where last year, I got up on stage and I was hoping people were going to like me. Now, it’s like me or not, but this is what we do.

JC: You mentioned you have a new single on the radio. It’s called “It Goes Like This.” Can you tell us a little bit about this one?

TR: For the longest time, I was so afraid to cut songs I didn’t write. I was always felt like I had to cut songs that only I wrote. As I got on the road and got to tour with people like Toby, Jason and Jake, I’ve realized that it’s just the best songs that matter, whether you wrote it or not. My dad actually wrote this song. When he sent it to me, I listened and loved it. I took it into the label and played it, they loved it, and we cut it. We felt like this is the song that was going to be big enough to spur my first record release. It’s coming in September! So, finally, I feel like it is all coming into place.

JC: You mentioned you are on tour with Jason. You are on the “Night Train Tour” with Jason Aldean and Jake Owen. Can you tell us any stories from the road?

TR: I don’t know how many are appropriate (laughs). I don’t know about any I can say. It has really just been a lot of fun. There is never really a dull moment, especially after the show with everyone just hanging out. Jake just got a kegerator on his bus – it’s amazing – Jason and Jake both have big fold out TV’s so everyone is always hanging out and playing video games.

JC: So, one more question. I’ve seen your YouTube videos and episodes – you were even recently on the Golf Channel. Tell me the drive behind “Wanting to be a Pro Golfer.” 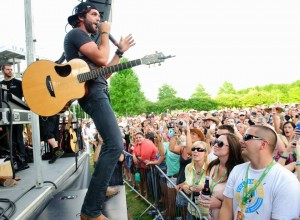 TR: Well, obviously that is a joke (laughs), because there is no way I could be a pro golfer. Ever since I’ve been touring – you can talk to any artist – if you don’t do anything during the day, you get bored and sit around and it’s an easy way to get fat. So, I’ve started working out this year, something that I haven’t done since high school really, and I just got bored so I started playing golf with Jake. I’ve gotten addicted to it; it’s weird. When I know I’m playing golf the next day, I can’t sleep; it’s like Christmas Eve. I did that “True Life” video of us playing golf before our Stanford Stadium show, and my publicist pitched it to the Golf Channel. They’d never had a Country artist sing on the Morning Drive before. I got to see the studios and use the golf simulator. It was just really cool to be on the show. I mean, Vince Gill is the only other artist I know that has been on the Golf Channel, so a lot of people get excited about the “Today Show,” and I get excited about “Morning Drive” – that is just how it is!