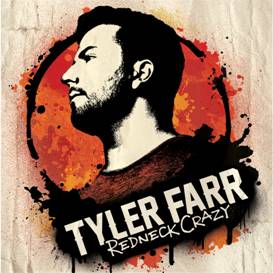 Personally, I think the album does a great job of mixing Farr’s style with both Classic and current Country music. My personal favorites would have to be “Whiskey In My Water” and “Ain’t Even Drinking.” However, I’d be lying if I wasn’t a sucker for “Redneck Crazy.” The whole album is one where you can listen to a fun song, a sad song, a mad song – all within minutes – and be satisfied. All of the songs seemed to incorporate the perfect amount of production. None are overproduced, and the real, raw sound of Farr’s voice is evident track after track.

I caught up with Farr to talk about his upcoming album. See what he had to say here:

JC: Tyler, you have your new album, “Redneck Crazy,” coming out here in a couple of weeks on Tuesday, September 30th. Can you tell us what to expect?

TF: I tell you what. I’ve been working on this album several years, well, a couple of years I should say. I’ve been waiting for the appropriate time to release it because you want to release it when you have a hit, and we’ve lucked out with Redneck Crazy and all the stars have kind of aligned for that with the video and everything. So now, we are here and we are at the time where the album is released, and it couldn’t be a better time. I have been waiting for this for a while now. It’s like a cute little kid waiting for Christmas morning, and now it’s here. It’s kind of surreal. Like I said I’ve been working on it a couple of years so I’ve had time to spend with it and pick what I thought were the best songs for my first album and the ones that I thought were “hit songs.” I’ve put together this musical portrait or painting if you will, all of these little pieces – which are the songs – to create a project that I’m very proud of. What I’m hoping that people get out of it is to see a little more about what I do rather than just one song. It’s one thing to release a single, but it’s another to release an album where people can see what you do besides just being the “Redneck Crazy” guy.

JC: You’ve mentioned a lot of different projects, songs and aspects – You have your free and open to the public album release party here in Nashville in a few days. What can fans expect to see at the show?

TF: Well, there won’t be any skinny jeans… no skinny jeans or leather pants because if any of my band members showed up in skinny jeans they’d be fired on the spot (he laughs). On a more serious note, it’s what I do. It’s going to be your best bet at getting to see me in my element in Nashville at The Stage, back in the honkytonks. That’s where I do my best work. Playing a show is the easy part for me. It’s fun. It’s like a kid in a sand box or on a slip-in-slide; it’s fun! The best part of my day on the road is when I get to take the stage so I’m excited for fans around Nashville to come and show up and be a part of it. Also, industry folks that haven’t gotten to see my play – maybe due to them having to work and stuff – can see me perform and see what I do. It takes a single album and the show and you can really get to know the artist. It will help them hopefully see what I do. I’m hoping to get a lot of people out there and spread the gospel of Country music.

JC: You’ve mentioned timing and how everything has worked – the your single “Redneck Crazy” hit Mediabase Top 5 on the charts today so one, congratulations, and two, can you tell me a little bit about the ride with this single? 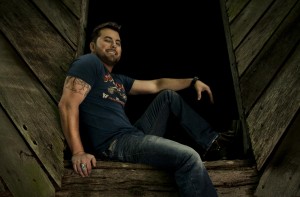 TF: It’s been awesome. It’s hard to explain in one word, or one sentence, what it has been like, but the single did just hit “Top 5” and the video just hit 5 million views on VEVO. I couldn’t have lined it up any better. You can’t play these things. You can’t write it any better than how it has happened. We are very blessed that it did happen that way. Sometimes things just line up. It’s good to see a good plan come together and all of the stars align. The last two or three months, just from the music video and getting the attention it did with Willie Robertson from Duck Dynasty in it, has been a big part of it. It would be unfair and pretty much a lie for me to say that it was just me who made this happen. There were a lot of people behind it, and it hasn’t been just the past year. It’s been the past three years and up to my life leading to this point. You can work and work and work to get to a certain point, and I have more goals, but it definitely feels good to see people react to a song and see people singing not only the chorus of the song but every word to it. They go “Redneck Crazy” over your song, and it has been the most humbling and exciting and nerve-racking experience of my life because this is all new to me. I’ve never released an album. I’ve never been on a huge major tour with my band so this Fall with the Florida Georgia Line tour and Colt Ford, being out with them is all new. The album release, the single, and you wake up one day, and it is a “Top 5.” You’re like “Wow!” It’s just kind of surreal. I’m very blessed and trying to take it day-by-day and one step at a time. It’s just good to see it finally come together and know that you’ve worked hard for it. It’s good to finally see some results.

JC: You mentioned the Florida Georgia Line tour, the “Here’s To The Good Times Tour 2013,” that starts in October with Colt Ford. Playing with them and being out on the road with them, how do you think that whole experience is going to be, and are you expecting to play off them any?

TF: I just recently did my first show with them since this Florida Georgia Line craze came about. After seeing their show and how many people showed up, I’m just like “Wow!” I told them afterward that they hit oil there. They hit a gold mine. Tyler and Brian are both super nice guys and both good dudes and have their own niche. They have definitely found their own thing so I couldn’t be out with a better group this Fall. Opening up and being out there with Colt, him being one of my good friends, and with Brian and Tyler – It’s one thing to be on tour with someone you don’t know, but it makes it that much better when you are out there with friends. I’m sure there will be some collaboration on stage and a lot of good times to be had. I couldn’t ask to be out with better people.

JC: Great! That tour will be a fun one! We’ll wrap it back up here with the album. What is your favorite song on the upcoming project?

TF: Redneck Crazy would be my favorite song on the whole album because it’s what has made me be able to release the album so it has to be “Redneck Crazy.” I love every song on there. I picked, or tried to pick, what I thought were the hit songs and best songs. It’s been a wild ride. In the making of this album, it’s been a long time coming. To be able to release it is awesome in itself. I wrote about six of the songs, and the other ones that I didn’t write from “Cowgirl” to “Living With The Blues,” which I did an acoustic recording. I do end the album with the acoustic song, which I plan to do on every album. It’s a stripped down live version of the song with just a guitar, and I wanted to end it on something Classic Country to get back to where my roots and where I got started, from being out with George Jones and getting introduced to him at an early age. I tried to put my style with some things, but it still has a Classic Country vibe to it. It’s a little bit of everything, and what I want people take away from it is that they kind of get what I do when they listen to it – all the way down, not just download a couple of songs.

JC: Well, I know we are looking forward to the album! Thank you for taking some time with All Access, Tyler!

Classical and Electronic Music Join Together For the Night Led by Composer, Johan Johannsson