Sub-Radio makes indie pop that grooves, stabs, winks, punches and inspires. Founded by six childhood friends, they built a worldwide following on the strength of ecstatic virtual and live shows and a stream of releases. Following the release of their 2020 EP Thoughts Lights Colors Sounds, produced by Andrew Maury (Shawn Mendes, Lizzo, COIN), the band embarked on a pandemic-induced virtual Reddit tour, reaching over 4 million unique viewers in just 5 months. Their latest single “What You Want To Hear”, which debuted in February, is a pop blast of love and compassion in the face of adversity.

When the world went into lockdown in 2020, Sub-Radio found a unique way to continue to form a community and build a fanbase: live-streaming their “tour” from their basement on Reddit’s RPAN platform. Their sets quickly became some of the most-viewed and highest engagement streams anywhere on the internet, reaching more than 5.5 million Redditors.

The music video for their new single “What You Want To Hear” captures the evolution of their quarantine streams from a simple six-piece setup to a full production complete with inflatable tube men and a light show. The video is packed with more than 300 “live” comments, some submitted by fans of the band, to add to the livestream atmosphere.

Here is “What You Want to Hear”:

Learn more about Sub Radio in the following All Access interview:

Thanks for your time! How are you all feeling at this point about the pandemic and the recent openings?

Obviously we’re all dying to get back on the road when it’s safe to do so, so I hope we get there ASAP. This is a weird sort-of-hopeful moment where you can feel that we’re actually turning a corner, I just hope we don’t spike the ball on the one yard line by getting reckless too soon. But it’s exciting to see some kind of normalcy come back. -Adam

Let’s talk about your newest track, “Out Of My Mind.” What was the inspiration for this song? Adam, what was it like writing music on your own in quarantine? What was it like making the music video for the song? How creatively involved were you all with the making of it? What do you love about making music videos for your songs?

“Out Of My Mind” was a little instrumental demo Matt cooked up with this monster synth riff and kind of Oasis-y guitars and it immediately put me in the very moody place lyric-wise. Maybe being isolated for so long had something to do with that too.

As for the videos, I’m not much of a visual artist and it doesn’t come naturally to me, but it’s always very rewarding to see the song come to life that way. It’s fun to play dress up also. -Adam

How would you say that these two new singles compare with your 2020 EP “Thoughts Lights Colors Sounds”? What was it like working with your producer, Andrew Maury on that collection?

It’s odd thinking about the two new singles separately because one of them almost ended up on “Thoughts Lights Colors Sounds”.  “What You Want To Hear” is kind of an older one that we’ve been kicking around for a while and right now felt like the right time to release it! “Out Of My Mind” felt very nostalgic as we were writing it. The song felt familiar, yet brand new.

Working on those songs with Andrew was such a fantastic experience because he understood exactly what we were going for. He was also super open to experimenting with some of the tracks and we think that paid off.  -Matt

I’d love to know more about this group love of 90’s inspired guitars. Where did this love come from originally? Why does this influence this band so much?

I think it’s something we’ve been hearing from the artists we love — The 1975 and COIN have both been influences lately. It’s also probably in our lizard brains as children of the 90s. -Adam

What was your virtual Reddit tour like last year? Did you ever think you would be forced to do an all-virtual tour ever? Are you continuing to do it this year? What it like building a fan-base this way?

It was shocking, energizing and extremely encouraging when it took off. We didn’t think twice about streaming on Reddit. You can imagine how stunned we were when the third stream hit almost 400,000 people. I don’t think any of us thought that we would be forced into a virtual tour, but in the wise words of a friend of mine “sometimes we’re pushed into paths we should have found ourselves”.

We have found a bit of a community on Reddit and it’s growing larger every week. The whole band still misses in person shows, but these Reddit streams have been such an amazing experience.  We’re looking forward to meeting all our new friends in person once it’s safe to do so! -Matt

How excited are you all about performing live again at your first live show in forever on May 22ndin D.C? Do you plan to tour much this year?

TBD on more tours, although we’re doing everything we can to get on the road in 2021. This show will be such a nice release for us — we haven’t played for a live audience since last August. -Adam

What do you think makes for an ideal show for this band? What have been some of your favorite shows and venues?

Unrelenting positive energy and definitely plenty of dancing! One of my favorite shows we’ve ever played was at the Firefly Music Festival in 2017.  We played this tiny stage and by the end we had drawn quite the crowd. The energy was electric at that show! -Matt

Can you recall the moment when you thought you could all be in this group together? Why do you think you all work so well together?

We have the benefit of tons of years of practice and figuring things out. Most of us have been writing songs together since we were 16 or 17 and that kind of bonds you together.  -Adam

How do you think your hometown has influenced the sound and how you all carry yourselves in this group? If not, why do you think that is?

I think that it has and it hasn’t. Washington, D.C. isn’t really known for Indie Pop, but the city has a fantastic history with music; especially punk and go go. I’m not sure we were really listening to hometown artists too much when we were first learning and writing. -Matt

How would you say that this group has grown as musicians over the years? How has your sound matured and developed? What has remained the same?

Man, it’s almost like two different bands. I think we’ve come a really long way in terms of what you might broadly call “production” — not just in the studio but in writing songs, crafting moments and transitions, picking sounds. But what we’ve kept throughout is a sense of playfulness and joy that I think comes through in all the songs. -Adam

I think it depends on which one of us you ask! Personally, writing and recording is hard to beat for me. I love starting a song and then finishing it up with the guys. Hearing it for the first time when it’s fully produced out and finalized is like magic to me.  Performing is hard to beat though. I will say if we’re spending our days in the studio or on stage, we’re probably in a pretty stellar mood!! -Matt

With all the different social media platforms out there, how do you balance it all? How do you think that social media has impacted this band? How often are you all on your different sites interacting with fans? How have you been able to utilize it through the years?

These are the essential questions of our time. Social media has always been a bit of a mystery for us, predicting what’s going to perform well is so damn hard and it can be kind of soul draining. But it’s also brought us close to our fans in a way we couldn’t possibly be otherwise, whether in the Reddit comments or in our Discord channel or in the Twitter replies. -Adam

What musicians have really been inspiring you all since you first started making music? Who would you all love to work with?

There’s quite a few who have inspired us. For me personally, the band Smallpools was a huge inspiration to me.  Walk The Moon is another. Both of those bands are up there for all of us! -Matt

I hope the exuberance and joy we bring to the songwriting and the recording come through for the listener too. If our songs can bring someone a little happiness or peace or laughter, that’s all we can ask. -Adam

A Year In The Life With The Dramedy 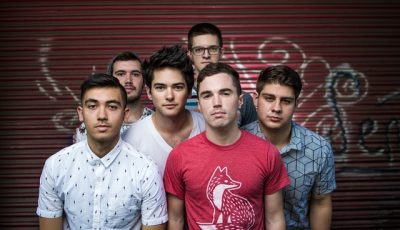 An Interview With The DC-Based Pop-Rock Band, SUB-RADIO!