In Interview With X Factor Winner and Once Half of Alex and Sierra Band Member, ALEX KINSEY On His Solo Music, What He Learned from The Show and More!

Meet Alex Kinsey! He is a singer-songwriter best known for winning the X Factor US as part of the duo Alex & Sierra. They went on to have two successful albums and 3 successful tours. Since their break-up, Alex went on to form band BoTalks who’s first single with Modern Family’s Sarah Hyland was a hit with over 5 million streams and 2.5 million plays. Alex continues to write and produce music. He recently caught the eye of Jason Mraz and become close with the singer and even performed and taught at the Jason Mraz Foundation last month.

Collectively, Alex has over 450 million plays on Spotify and 170 million views on YouTube. Alex just launched his solo project under the name Kinsey with his first solo EP ‘Party of One’. ‘Party of One’ features an eclectic mix of genres including his first single, infectious, dark hit ‘Simple’ and lead single, sexy sultry tune ‘Hot Mess’

Party of One Spotify link: https://open.spotify.com/album/54BQhJRzWi8dvll44bCjGf?si=QghX4pQoQz-vgwuMzldxAg

Learn more about Alex Kinsey in the following All Access interview:

What does a typical day look like for you? What do you have scheduled the rest of today and this week?

I usually wake up… drink coffee, get tired, and think about eating until its time to sleep again and I squeeze music in between eating.

Now that we are in the latter half of the year, how has 2019 treated you? What are some goals that you have had for yourself this year? How close are you to reaching them or did you already? What are you already excited about for 2020?

2019 has been great. There has been good music, good videos, good friends, good beer. all around good. I wanted to release my EP, and I really wanted to go on tour. but I think accomplishing all of your goals every year is a little nerdy. I’m excited about figuring out a tour in 2020.

Growing up, how important was music in your life? Can you recall the moment when you decided that you wanted to be in this industry? Was it an easy or difficult choice to make?

Music has always been a part of my life. i did karaoke when i was like 3 or 4. paperback writer by the beatles. I knew i wanted to be in music as soon as i saw jason mraz play at universal studios mardi gras in 2005. it was an easy choice. I mean who doesn’t want to potentially make a bunch of money doing what they love?

I haven’t really ever thought I’d do anything different. there’s really no back up plan. I like to live dangerously ya know?

BUT, if I had to do anything else that fulfilled me, it would be cast member of SNL… or comedian in general. Making people laugh is dope.

Basically every aspect of the music industry is unexpected. I never know if I’m going to get paid for anything i do, i never know who might be in the same room as me writing a song, i never know what songs are going to resonate and which ones aren’t. but the excitement of not knowing is one of the best parts.

What do you think is the biggest lesson that you learned from being on X Factor? If given the chance, would you do it all over again and any differently?

Hmmm… X factor was an immediate immersion into the industry. I was immediately a professional and I learned a lot in a short amount of time. It was a cool way to learn but it was definitely a crash course.

Hell yeah I’d do it all over again and nah, I’m cool with how things are going and I like to think the best stuff is on the horizon.

What has it been like branching out on your own and releasing solo material?

I don’t know man. Hard, fun, annoying, satisfying. It’s like running a business that you also care about like a child, but also kinda hate like a step child.

I was writing a bunch of music, and there were a bunch of songs that I liked, so I decided I’d release an EP with some of them on it.

Being solo is cool. Just means if I fuck everything up I don’t get to blame anyone else for it now.

How do you think “Hot Mess” prepares listeners for the rest of your EP? How did you go about choosing it to be the lead single?

None of the songs are really similar to one another. I tried to just write a hodgepodge of songs to put out, cause I like a hodgepodge of music. This EP is basically an EP I wanted to listen to.

Everyone I played it for really liked it immediately, so I figured if it resonated with my friends and family it would resonate with other people. I also really like the song too. PLUS we made a sick video for it.

Where can people see you perform next? Do you have any fall tour dates scheduled yet?

I’m playing a bit around LA in the next few months. I’ll keep my social stuff all updated with dates. I’m also working on a music based youtube type series where I play music with all of my musician friends. I think it’s gonna be really neat.

How do you think you have grown as a musician since you first started making music?

Oh man, I’ve gotten better in literally every aspect. I used to suck at most of what I do! It’s just practice, and also bombing a bunch. Once I mess up a song really badly, I usually never mess it up again.

Meh… its fine, gives me something to do in Ubers. I’d prefer to go surfing or something, but I understand the importance of it for the entertainment industry, and I appreciate the ability to connect with people I’ve never met on it. That’s really the best part of it.

I’d love to work with John Mayer, Bruno Mars, Ed Sheeran, Andre 3000, Vulfpeck, louis prima even though he’s dead. The Beatles…. or I guess just kinda Paul at this point.

I’m not a super visual person. I usually leave the music videos to my cousin Bruce. He’s a genius.

Where would you love to hear a song of yours played?

Literally anywhere. I’ve never organically heard my music played in the wild. So just like anywhere! Oh wait, there was this one time I was sitting in the literal last row of a delta flight and my song came on the speakers. I wasn’t sure how I felt about it.

I want people to be happy. I think we’re all just trying to be as happy as possible. So if I can help get people get to “As happy as possible” for like 2 minutes and 40 seconds then I’m happy, and then its this cyclical never ending happiness that keeps my world turning.

I just hope people hear it and like it. Sing along, dance, cover it, play bass to it and be happy. That’s all. 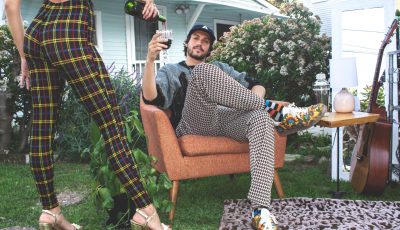