Armed with numerous instruments from American guitars to an Andean charango purchased in Peru, the five members of Humming House blur musical borders on their third studio offering, Revelries, due on March 24. The Nashville quintet’s 11-song set manages to meld most of the sonic subgenres emerging from today’s Music City, including – but certainly not limited to – folk, bluegrass, blues, rock, soul and the always hard to define auditory amalgamate known as Americana. 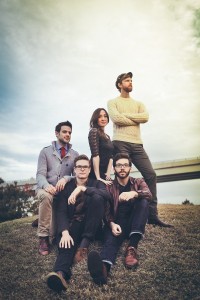 When asked what her definition of Americana is, co-lead singer and (what else) multi-instrumentalist Leslie Rodriguez began with a rhetorical question of her own, saying, “What is Americana? I would like to know,” before adding, “My own definition is just an amalgam of different influences. If you’re digging into the history of music and pulling out different influences and combining them together so that you don’t fit neatly into any other genre. I think in that way Americana is sort of a catch-all. Americana is a very welcoming genre that lets anybody in the door who doesn’t fall neatly into any other traditionalist category.” Two additional traits – one musical, the other muse-driven – inform Humming House’s sound and vision; harmonies and wanderlust. Both were discussed in detail in my recent chat with Rodriguez.

Oh my gosh, everything. I grew up listening to bluegrass music and rock. My parents played a lot, everything from Bonnie Raitt to Stevie Nicks to Alison Krauss. So I heard a lot of that when I was growing up, and definitely hummed a lot of it. (laughs)

Looking back, was there a big bang moment for you musically where you thought, gosh I wanna do this?

Actually yes. There was a moment when I was much younger, probably 10 or 11, and I actually remember being in the Target parking lot and telling my dad that I wanted to be famous; whatever that means. And he actually signed me up for an open mic night the very next week. That was one of those moments. But another one that was much more formative and more recent was in the fall of 2012 [when] I went to see Bonnie Raitt at the Ryman [Auditorium]. I was by myself; my parents had bought me a ticket to go alone and I just remember sitting there weeping watching Bonnie Raitt onstage and just thinking I have missed out on this; I will never be able to do that and just feeling kind of really devastated by that thought and then in the spring of 2013 I joined Humming House and it’s been great.

That’s fantastic. I love both of those stories; the Target parking lot and then I guess you hit a bullseye with Humming House. Let’s talk about Revelries, the album that will be released on March 24. It features 11 tracks and that number just about matches the number of instruments played by the various band members. Give us a quick rundown on who’s in the band and what instruments each handles at any given time.

(Laughs) Oh wow, OK! Well sit back, it’s gonna be about a half an hour answer. There are five of us. So Justin Wade Tam is our lead singer and ring leader and he plays guitar and ukulele and there’s a song on the album called “Carry On” and he plays a little instrument called a charango, an Andean instrument. Joshua Wolak is our mandolin player and he plays a slew of instruments. He also plays guitar onstage but then offstage he plays – hang on he’s sitting right next to me – he says he’s a utility musician. He grew up playing trombone, so yeah, he’s versatile. Ben Jones is our bass player and he also plays kick drum onstage which is amazing to me; it never gets old watching him do that. So he holds it down for us, oh and also plays viola. And then Bobby Chase is on fiddle and he also plays viola and on the album he’s also our drummer and plays piano and a number of other things, so he’s another one of those versatile, utility musicians. And then I do the percussion, so I’m singing onstage and play the snare and the tambourine and the shaker and all that fun stuff.

You did well summarizing all of those great players and instruments. You mentioned the charango; I know a little something about Andean instruments because I was born in Peru.

Oh, cool. My husband is Chilean so I’ve been in that area quite a bit. Justin actually bought his charango in Peru.

Very cool. Now I’m gonna name some song titles on the record: “Run With Me,” “Fly On (Forever is Better With You),” “Hitch Hike,” “Atlantic,” “Great Divide” and “I Am a Bird.” With song titles like that there appears to be a lot of traveling going on here.

Yeah, I see you caught onto that theme. It’s definitely a record about movement and travel. We’ve been doing a lot of touring so a lot of the song inspiration came out of touring around the country and getting to do things that we wouldn’t have been able to do otherwise.

How much does wanderlust play into Humming House’s music and maybe your own life as well? 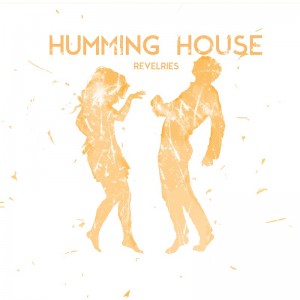 We all love to travel. Justin was in Ireland last year and he’s been there a couple of times and we actually met while studying abroad in London. We’re all definitely world travelers and we love moving around this country and we get kind of stir crazy when we’re in one place for too long. We definitely love being on the road. For all the hardship it has given us, it’s also given us a lot of great stories and experiences. We get to scratch that wanderlust itch as much as we need to. For me personally, that’s one of my favorite things about being in a touring band is getting to see places that I probably would never have seen otherwise.

We had no idea how it was gonna turn out originally. We went in to record it with a buddy of ours as a demo. We thought we were just gonna put it up as like a licensing song to do weddings and just like as a sweet love song. We didn’t know if it was gonna fit the vibe for the album and once we finished it we started playing it at shows and people would come up and ask about that song about Spain and going places and getting old and gray, and they’d ask where they could download it. So we just figured we liked playing it and people seemed to like hearing it so it would be nice to have a love song besides “Fly On” on the record. So that’s how it wound up there.

So we’ve been “traveling” in our conversation, here, there and everywhere. Let’s take it much closer to home. Historically, Nashville has been known as the capital of country music. To me, a lot of the current country is rooted in rock. That aside, you’re there, so can you to paint a picture of the current musical landscape in Music City?

Yeah, it’s an incredible time to be in Music City. On any given night at some of the best venues in town, you can go out and hear some of the best singer-songwriters out there. It’s a great indie scene, especially in East Nashville, and it doesn’t seem like there’s any kind of competition around it. Everybody’s pretty supportive. I really love being here and being tuned into that. It’s not that hard to find something that you like outside of the traditional country scene. And there’s a lot of great new country.

Harmony vocals are a huge part of the band’s sound and they’re certainly on full display on songs such as “Fly On,” which you mentioned earlier, and “I Am a Bird,” both of which you take the lead on. Take us in the studio and talk about how those two tracks came together, starting with “Fly On.”

When I’d joined the band they had already demoed it, so when we went into the studio to rerecord it for the album it was a really smooth process. We really love where that song falls for us in terms of vocals because it’s just really nice that we can all go into that a cappella part at the end and feel like we’re pretty solid in where we are live and in the studio. Now “I Am a Bird” was quite a process. If I could pick one song that was the complete opposite of “Fly On” in terms of how it came together in the studio that would be it (laughs). Right up until the last minute in the studio we were figuring out how we wanted to do the background vocals and what we wanted to add and take away. I think what we came up with in the end is really a cool track, but it definitely took a lot of trial and error and troubleshooting.

For those who have yet to experience Humming House live, how would you describe your stage show?

Oh wow, we have a lot of fun. So, I would definitely describe it as a party; that’s how we’ve been describing it since we released our live album last fall called Party. I think a lot of what happens in Americana is that songs and acts tend to be kind of somber and grim even. We’re trying to just carve out a niche for having a really good time onstage and with the audience and we try to interact as much as we can. So I think audiences can expect a very upbeat, fun party time.

Speaking of playing live, you guys are going to hit the road, starting March 3 in Auburn, AL. How is life on the road with four dudes? 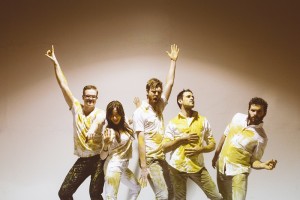 (Laughs) It’s awesome! These guys treat me like, ah, like part of the band. I would say like a queen, but…(laughs). They tease me a lot and I tease them so maybe not like a queen, but I love touring with these guys. They’re my best friends now and we have a total blast. And there are ups and downs; we have our days when nobody wants to talk to each other and we all just feel it’s better to keep our mouths shut than start anything, but we’re all really close. And as a girl, with four guys, they always give me the hotel room or the bed or they let me take the backseat of the van, which I love. But yeah, it’s great. We have a good time.

Final, fun question for you: you’ve shared stages with some pretty big names, but who would you love to open for? Maybe top two on your bucket list?

Let’s go with bucket list first, and then possibility.

Well let’s recap; Revelries is the name of the new album and it will be out March 24. Leslie, thank you for your time; it’s been fun. It’s been fun traveling with you.

**To hear audio of my conversation with Leslie and the song “Fly On (Forever is Better With You)” off Revelries, check out Episode 19 of my weekly Current Classics podcast. Listen HERE.