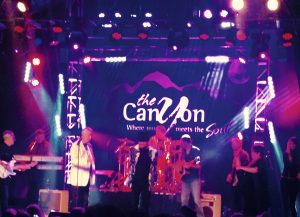 On Friday October 20th, Monkee Micky Dolenz and his band rocked the Canyon Club in Agoura, CA before a packed house of fans young and old.

Dolenz took the stage wearing a suit and his signature fedora kicking off the evening with (“I’m Not Your) Steppin’ Stone”.  This was followed by a string of Monkees hits that included; “Mary Mary,”  “She,” “Sometime In The Morning,” “Last Train To Clarksville,” “A Little Bit Me, A Little Bit You,” “Let’s Dance On” and many more. 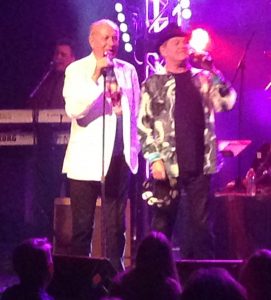 As he introduced the songs, Dolenz praised the contributions made to the music of The Monkees by songwriters such as Carol King & Gerry Goffin (“Pleasant Valley Sunday”), Neil Diamond “(I’m A Believer” and “Last Train To Clarksville”), Boyce And Hart (“Words”, “Valleri” and “Steppin’ Stone”) and of course, “Daydream Believer” written by John Stewart of Kingston Trio fame.

Some select covers were also in the set including Spencer Davis’ “Gimme Some Lovin’,” “D.W. Washburn” by the Coasters and “That Was Then, This Is Now” by The Mosquitos.  At one point, Dolenz told the story of Jimi Hendrix opening for The Monkees during the early stages of his career, then launched into their own version of the psychedelic anthem “Purple Haze.”

Kief Nilsson, son of the late Harry Nilsson, joined the band for a duet on “Good Times” which served as a nice legacy to the song written by his father. 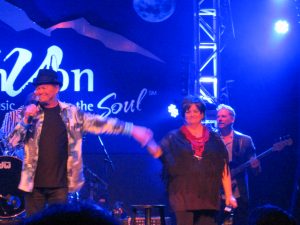 Micky also introduced his own sister, Coco, to sing the Mike Nesmith penned hit “Different Drum” which he noted was turned down by the producers of The Monkees TV show but later went on to become a hit for Linda Ronstadt.

The highlight of the evening was the reunion of fellow Monkee Mike Nesmith and his son Christian Nesmith who joined Micky for “Me & Magdalena” and the encore, “I’m A Believer.”  Peter Tork was not on hand, but would have been  honored with Micky’s rendition of his #1 hit, “For Pete’s Sake.”  The only thing missing from the evening was the dearly departed Davy Jones, who was definitely there in spirit.

Micky Dolenz and his band will perform again tonight (10/21) at the Saban Theater in Hollywood and there are some additional dates planned for later this year.  So be sure to catch the show If you’re a long-time Monkees fan who is thinking about going.  You won’t be disappointed.

An Interview with The London-Based Musician and London Grammar’s Younger Brother, BRUNO MAJOR!