GOODBYE JUNE Rockers Discuss Their Newest Music, Wrapping Up 2018 and Much More! 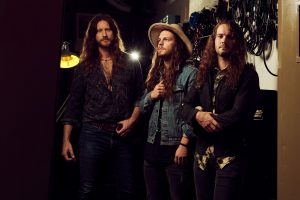 On October 26th, the Nashville rock band Goodbye June released their EP “Secrets In The Sunset.”

Against all odds, Goodbye June remain committed to said mission. That resolute spirit defines their 2018 EP, Secrets In The Sunset [Cotton Valley Music]. Within the span of two years, they lived through a dramatic series of ups and downs, placing them on both sides of the spectrum. They amicably parted ways from their major label deal. Tyler experienced the birth of his baby girl, while Landon’s fiancée called off their wedding three weeks prior to the date (during a solar eclipse, no less). As they entered Black River Studios with producer Bobby Huff, the three-piece drew on “this turning point of joy and heartache” to record the five-song collection.

In the wake of their 2017 full-length debut Magic Valley, the boys earned the endorsement of Rolling Stone, contributed “Liberty Mother” to a high-profile Budweiser campaign, packed shows across the country, and racked up 30 million-plus cumulative Spotify streams. An avalanche of rip-roaring rock ‘n’ roll, Southern-fried blues, and gospel soul, the group traverse their own lane at full speed, etching out a place ahead of the pack.

Learn more about Goodbye June in the following All Access interview with them:

Strumming some guitar, maybe write a sad song. Who knows? The day is full of possibilities.

Since 2018 is about over, how has this year treated this band? What is one musical goal that you have had for this year? How close are you to reaching it?

The first half of 2018 had its trials and the second half was full of opportunities, but such is life.  One of our biggest goals was to return strong to Europe and introduce ourselves to the UK.  In Oct/Nov we supported Greta Van Fleet and got a great response. I think we accomplished that goal.  We also wanted to figure out what Goodbye June was post Magic Valley, and we discovered the first phase with the Secrets In The Sunset EP.

Can you recall the moment when you thought you could be in this group together? Was it hard to think of a name that you could agree on?

Years ago, we were in Tyler’s parents’ basement writing the first songs we ever wrote together. It was fun, fresh and it was pushing each of our comfort zones musically.  From there it slowly grew and we wrote more songs and eventually played a show on the back of a semi-truck trailer in Mississippi. Goodbye June was alive.

Brandon coined the name Goodbye June, which is to memorialize Tyler’s deceased brother (Landon and Brandon’s cousin). We all thought it was cool so we went with it.

I wouldn’t say our hometowns influenced us as much as the churches we grew up in. We played a lot of gospel and choir music growing up so that lingers in our music still today.  Some of the heavy guitar riffs are really just blues-based gospel riffs that we cut our teeth on.

How has your various musical backgrounds helped shape the sound of this band?

Gospel, old country hymns, classic rock, 90’s grunge, and southern gospel are the main ingredients that we use to make our sound.  The discovery of “secular” rock happened later than most people so I think digesting the greats like Led Zeppelin, Leon Russell, Jack White, and CCR really made an impact on how we write our songs.

How did it feel releasing your newest EP, “Secrets in the Sunset”? Can you pick out a few of your favorite tracks on this collection?

Felt great. We were fresh off of a lot of personal struggles and we were (and still are) teeming with ideas.  “Secrets In The Sunset” is a band favorite, and “Live In The Now” has a timely message.

What was their inspiration and how did they get to be on this EP?

We try to wear our hearts on our sleeve when it comes to writing, so this EP captures the feelings that we experienced in 2018.  We looked at a lot of different ideas and grouped these five together to make a vibe.  I think the next release has the opportunity to be very different from SITS.

Did anything surprise you about the overall process of putting this EP together?

Once the songs were written, it was a very fast process. It was flowing so easily and it was really fun to work with the guys.  Once we figured out the vibe of the EP it was all about capturing the live performance.

What was it like working with your producer Bobby Huff at Black River Studios?

Bobby was great. He did his job as a producer, which is to support our vision and bring what’s in our crazy heads out on a record.  Paul Moak (Magic Valley producer) produced one track on the EP called “Joan&Dylan.” Both are awesome to work with and extremely talented musicians themselves. They both started in bands and toured heavily so they know that it’s important for a song to translate on a record as well as on the stage. Black River is a great studio and creative space. We also recorded at Paul’s Smoakstack Studios, which is always a creative and inspiring space.

How has it been touring Europe with Greta Van Fleet this fall? What have you learned from them and this experience?

GVF are a class act. They are sticking to their mission no matter what anyone says and it’s refreshing and inspiring.  The crowds were so diverse it made us feel like we were a part of something very special.  They jam and improvise a lot in their set, which was never really a priority for us, but I think it can create some very special moments in the set.

Generally, how do you all go about writing your music? Do you write together or separately?

Both. The song reveals herself in different ways. Sometimes one of us writes most of a song and brings it to the band, or one of us comes up with some chords, or sometimes it just comes from a drum beat we like.

The studio is the therapy. Traveling is the work. The stage is the reward.

Can you talk about your wildly theatrical live performances? What inspires these shows and the way that you entertain crowds?

We are pretty reflective to the energy of the moment. You give us energy and wildness and we return it.  You give us chill and attentiveness, we’re gonna focus in on the songs more. It’s a relationship, the show always flows differently depending on the crowd.

Do you find that all of social media and keeping up with your fans has gotten so overwhelming? Or do you rely heavily on others to take care of that for the band? Which platform would you say that you enjoy engaging with the most?

We do most of our socials, except show announcements and merch stuff.  All the personality is us. We love connecting with our fans but more and more it’s getting difficult to communicate with everyone, but that’s the nature of this beast.  We like Instagram because it’s quick and easy to express yourself with a picture or video.

We don’t dive too much into the political craziness, but all we will say is that throughout history there must always be a villain.  Music has no villain, it’s only a mirror for the listener…  unless the listener is a villain.

We’d love to work with Jack White.  Steve Jordan or Paul Mabury are always inspired on the drums.  It’s a big mixture of artists but Leon Russell really affected everything since Magic Valley.  Compare Magic Valley’s album cover to Leon’s WILL O THE WISP album cover.  A salute, a nod, and a thank you.  You’ll get it.

The messages of our music are really just trials and triumphs that we are dealing with in our lives.  Whether you relate your life to our music or you hate everything we do and it strengthens the joy you get from another band, it’s all good to us.  We hope our music brings you happiness, or sadness, or anger, or reflection… but never all at the same time because your head would explode and you would die. We don’t want that.

An Interview With The Philadelphia-Based Alt-Rock Band, KNIGHTLIFE!

An Interview With THE PENNY SERFS About New Music, Favorite Artists and More!