Serving as one fifth of the winning group for ABC‘s 2017 competition show Boy Band, the former In Real Life bandmate Brady Tutton shares the first taste of his upcoming debut album with single, “Staring At The Ceiling.”

As the guys split in early 2020 to pursue their own individual ventures, Brady emerges as the last member of boy band to share their solo music. Utilizing the pandemic and down time that came with quarantine, the 20 year old musician and actor took the break to hone in on his sound and the type of music he wanted to create. What emerged was an introspective and mature sound that is evident in the debut release of “Staring At The Ceiling.”

Forgoing all unsolicited outside opinions and being on his own schedule gave him the opportunity to not only write (or co-write) his entire album on his own but also produce it. He also remained busy writing for other artists even gaining a cut on K-pop superstar KAI‘s platinum album Peaches with their song “Blue.”

With the debut single out in the world and the album, We’re All Going To Die Anyway set to drop this fall, Brady is well on his way to conquering this new chapter in his musical career. All Access‘ Austin to talk about the new single, what’s the weirdest thing he’s thought about while staring at the ceiling, what the other boys of In Real Life think of his music and more.

Get to know your new favorite artist below:

ALL ACCESS [Austin]: Going back to the beginning, do you remember what your first performance was?And then what was your first paid performance as an artist/musician? Any noteworthy stories from either?

BRADY: So my first performance was also my first paid one – When I was about 7, my mother took me to audition for the musical A Christmas Carol at the Marriott Theater in Chicago. At one point, to see if I could be good at reacting on the spot, the director chased me around the room. After about a minute, 7 year old me stopped, turned around, and said “You’re crazy, Lady!!!!”.

She and the rest of the people in the audition walked out with me and told my mom I got the role, and I ended up doing about 30 shows.

AA: Ha! What a wild start into the entertainment industry. As a member of the boy band In Real Life how has your creative process changed since becoming a solo artist? What’s your favorite thing of releasing music on your own? What’s most challenging about it?

B: It’s a really strange feeling after years of being in a group, to wake up and be able to make literally whatever you want. I spent much of the pandemic doing that, exploring different styles and figuring out how my music should sound. When you’re alone, you’re more open to trying stuff that may not sound good all the time, and that leads to really interesting sounds. When you’re in a studio with five guys, plus whoever the label hired, and every minute costs money, the creative environment is much different, and often not conducive to good art.

I’m really thankful to have a studio at home to be able to work in at all hours of the day, because ideas happen randomly, not necessarily during the allotted time you booked a studio. One thing that I find challenging about releasing my own music is taking time away mentally. I’m working on being more present, which is a never ending task, but I have found it a bit harder with the new release and so many more things to think about.

AA: Well the creativity is evident in the first song. Which by the way congrats on the debut single, “Staring At The Ceiling.” Describe the inspiration behind this one and why you felt this was the right song to release as your debut solo single.

B: Thank you so much, I’ve been feeling really grateful for the response and how the song has begun to open doors for me. When my brother Ryan and I first wrote this song I could feel a definite shift in how I thought about music. This was our first song together, and it set the bar for the next two years of writing and creating for my project.

After hearing the song 20 million bajillion times, and making many more songs I loved, there were times when I was unsure if I should still put it out. However, I eventually realized my so called listening fatigue didn’t change the quality of the song, and that “Staring at the Ceiling” provided required context for the rest of my work.

AA: Speaking of, what’s the weirdest thing you’ve thought about while starting at the ceiling?

B: The other day I was lying on my bed thinking about something I heard this woman on Twitter say, about how when you wake up, the first thing that wakes up is your perception of your environment, meaning, you notice the light and the temperature, and consider what time it may be. Then, you start to think about what you have to do that day, and conversations you had the day before start to return to the front of mind as you “search for the familiar feeling that is yourself.” I think this has stuck with me because it touches on the fact that human awareness and consciousness, is entirely separate from how your experiences thus far may have shaped your view of the world around you. Trippy.

AA: Woah that is trippy – keeping on “Staring At The Ceiling” – it’s part of an upcoming album, We’re All Gonna Die Anyway that is due out this September which is entirely written / co-written and produced by you. Why was it important for you to have such a hand in each song on the album? How did the album name come about?

B: Above all else I just know exactly what I want my music to sound like. I’ll sit on ideas for years before I know they’re right. I know a ton of insanely talented people who make songs that I love, but at the end of the day, I can only trust myself to make sure everything is up to the standard I expect.

The album name I’ve known for a while even before many songs were done. It started as something I would say to myself, kinda like a “C’est la vie” type phrase. When I started telling people what the name of the album was, I was surprised at how people reacted. People laughed like I was joking, or were really put off by the sentiment. This only cemented my confidence in the title, as it showed me how much fear surrounds the concept of mortality. When I say “we’re all gonna die anyway,” I find it very comforting, because it puts everything in perspective. We have so little time here, and reminding myself of this helps me to keep a healthy mindset and not dwell in the minutia.

AA: Agreed and interesting way to look at death. You were the last member of In Real Life to put out solo music – did that make it easier to release music or did that put more pressure on you? What’s been the rest of the group’s response to the single?

B: It’s funny a lot of people have asked me about that amongst my friends and family, but the fact that me being last may add pressure hadn’t really occurred to me until it was mentioned. I don’t, and didn’t feel any extra pressure –  I think we are all really supportive of each other, so it was more excitement that I was finally putting something out. They had all heard the single and had been telling me to put it out; when I told the rest of the guys from In Real Life that it was coming out, it was nothing but support.

AA: In a 2018 interview you listed: scuba dive, performing at The Forum and getting your pilots license as your bucket list items. Any of those crossed off? Any additional bucket list items you’d add?

B: Wow that question was so cool to read because I remember giving that answer so vividly. I actually did get my scuba certification and have scuba dived several times now. I haven’t performed at The Forum, but I did perform at Jingle Ball outside the The Forum, so kinda halfway there. Pilots license is a little further off, but that would be a cool way to show up to Coachella so I’ll figure it out.

AA: What’s been the biggest pinch me/surreal moment in your career so far?

B: When I saw that Kai’s album Peaches, which I had written the song “Blue” for, went platinum, that was a really surreal and humbling moment. I know plaques shouldn’t really matter, but growing up, the idea of having even a silver or gold plaque seemed so impossible; I knew younger me would be really proud of what I’ve accomplished.

AA: Those plaques are so cool so congrats on that! Now a question asked in every interview is if you could only listen to (5) artists for the rest of your life, who would they be?

B: In no particular order: Kanye, Frank Ocean, The Shins, Jazmine Sullivan and Brandy.

AA: And to wrap it all up what’s the rest of 2022 look like for you beyond the album?

B: I’m always thinking a few years ahead, but I think this first year is really important as a launching pad for the rest of my music career. There are things I’m working on now that may not come into play for a while, but I think are important to start thinking about and planning. I plan to spend the rest of the year working on new music, and rehearsing for live shows, which I am really looking forward to.

Shout-out to brady for the release of his first solo single “Starting At The Ceiling.” Releasing your first song after being in a boy band for so many years can be nerve racking but brady absolutely crushed it. The debut gives the first look at the album We’re All Going To Die Anywhere that is expected to drop this fall. Keep up with his journey and the upcoming music by following along with the links below: 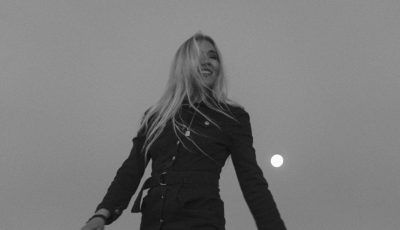