Check out Sheppard’s Exclusive  Interview Below.

Sheppard is a family-founded indie rock band from Brisbane, Australia. They have won tons of accolades Down Under including Album of the Year, Best Group, and Song of the Year at the 2013 Aria Awards, which is Australia’s version of the Grammy Awards. Sheppard recently wrapped a tour opening for Meghan Trainor and played on numerous US television shows, such as Ellen, The Today Show and Live with Kelly and Michael. Their hit “Geronimo” recently earned platinum status. This band known for its tight harmonies has just launched it’s first headlining US tour.

All Access Music: “Your album “Bombs Away” was a huge hit in Australia, going 5x platinum over the past several year. How has it felt since it debuted in the U.S. February 2015?”
Amy Sheppard: “It has been the most exciting time of our lives. We feel as though our hard work has been paying off and the album has exceeded any expectations we had. One of our biggest dreams was to break through into the USA, so we can’t wait for our U.S. fans to get to know us more.”

AAM: “`Geronimo’ is a big U.S. radio hit. What song do you feel Americans should listen to next?”
AS: “If they haven’t already, I would suggest they should listen to “Let Me Down Easy” as this was the song which broke us in Australia. Another track which might surprise listeners would be ‘The Best Is Yet To Come’.”

AAM: “‘Geronimo’ knocked Pharrell Williams’ `Happy’ off the top of the radio charts; what did that feel like?”
AS: “We felt a little bad because Pharrell was about to smash a record for the longest running number one, however, nothing could hide our excitement to have our very first number one- Sorry Pharrell, clearly you’re still a king.”

AAM: “Who is joining you on this US tour?”
AS: “We are really excited to have the band Lawson join us on this tour. They recently did a cover of `Geronimo’ which impressed us. We can’t wait to meet them.”

AAM:”What message do you want fans to take away from your music?”
AS: “We just want people to be able to relate to our music. Our album has themes of hope and picking yourself back up after someone knocks you down.” 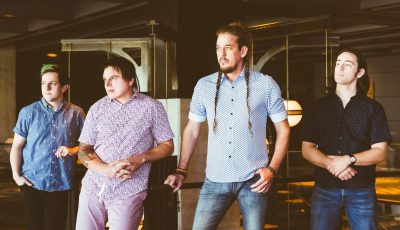