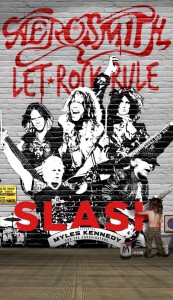 Aerosmith is on the road again this summer for their Let Rock Rule Tour, jammin’ across the US after exciting fans across Europe in the spring. With special guest Slash of Guns and Roses featuring Myles Kennedy and the Conspirators, the band is sure to keep fans screaming for more. Bassist and backing vocalist, Tom Hamilton, sat down to talk touring, tagging, and giving back to his community.

On July 10 Aerosmith kicks off US dates for the Let Rock Rule Tour. What brings the band out on tour this time around?

“What happens is we’ll be off the road for a few months and our manager is working away in his office and looks to see that a lot of people want to come and see us. Somewhere in the world there’s usually a group of cities where we can go and play. It’s really amazing. It’s been spreading—we’ve been to South America a lot the past few years; we’re in Europe now. We were in Australia and southeast Asia last year. So there’s always new and interesting places coming up where we find there’s new Aerosmith fans. It’s exciting to know that and we just want to get on a plane and go.”

How does the band go about creating set lists for this tour?

(laughs) “Well we were pretty sure what the set list was going to be before the tour started but… we haven’t toured for a year or so, we’ll go to rehearse—the first day, the first days, and it’s really a meeting about what songs fit the set. We get out a big blackboard and write down all the songs we’d like to play, all the songs that are fan favorites, and choose the ones we want to use and that fit the core structure of the set. It’s pretty hard to tell you the truth, and it’s not always exactly the same for different areas or the world, so we have to try to be aware of that.”

You’ll be joined on stage by guitar legend, Slash of Guns and Roses. What does he bring to the set? 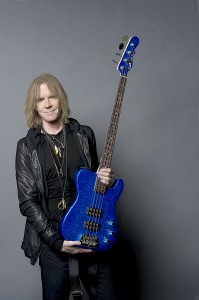 “We’re really excited for him to be on the bill. It creates a synergy that’s bigger than the two bands. Slash is a true rocker; he represents Guns n’ Roses to me, almost more than Axl. I think Slash has stayed closer to the original feel of that band. There are a lot of Guns n’ Roses fans, a lot of Velvet Revolver fans and we’re excited about them coming to the show. It’s going to be a great bill.”

The tour was teased when Joe, Joey, and two graffiti artists tagged walls around LA with the band’s logo. In a time when social media is so prevalent, why was this a good way to get fans’ attention?

“It was just something unusual to get attention, really. We’re always looking for new ways to get people’s attention and make them think about coming to the show. If you watch a lot of advertsing on T.V., you’ll be watching it and something really random and strange will happen that doesn’t relate to what they’re advertising, but it gets your attention. Anything that gets people’s attention is providing opportunity for you to tell them what the real message is, which is: we’re out on the road, we’re on tour, and it’s gonna be great, and you should think about coming.”

With a new tour, fans are surely to wonder when new music will come. Any updates?

“Well we put out an album in late 2012 so we’ll be playing a few songs from that. As far as making a follow-up to it, it’s not something the band has talked about in a group—but I’m always working on new stuff and always looking ahead. I hope we go back in the studio as soon as possible, hopefully in the next year, year and a half or so. We’ll take what we learned from the Music From Another Dimension! album and refine it and boil it down and come out with a new record. So we’ll see what happens.”

Aerosmith pioneered collaborating with artists from other genres since you did “Walk This Way” with Run DMC and more recently with Carrie Underwood on your last album. Who do you want to work with in the future?

“It’s not something we think about doing actually; a lot of those things just come along. It’s an opportunity thing—when something comes around, you grab it. I think that when it comes to making an Aerosmith record, it’s the five of us expressing what we’re into at the moment. Something always happens in the middle of it—somebody finds our you’re doing it and a new idea will come up.”

Through the years Aerosmith has helped many charities. What causes do you feel are the most vital to lend your voices to now?

“As an individual, my wife and I do a lot of charity work for Childrens’ Hospital in Boston and Franciscan Childrens’ Hospital, which is also in Boston, and Mass General Hospital in Boston. There are some events my wife helps to organize and she drags me along, and I’ll sort of be the celebrity entertainment. I did a thing recently where there was an auction and one of the items in the auction was to come over my house, have beer, and talk about the band all night. It went great. A few months later I’m sitting at home, my wife Terry is there, my kids, and all these sort of bankers and big wigs in the insurance industry sit around and talk about music and being in a band all night. That was really fun. That’s something that we’re into. 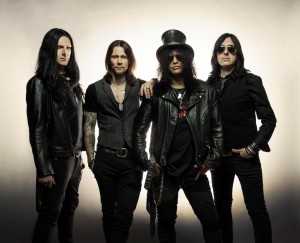 There’s another organization that I’m into called Urban Improv, which is this group of actors—what they do is, they go into inner city schools and act out situations that kids can find themselves in, difficult situations they can find themselves in, and they act them out they stop in the middle, and then they’ll get the kids to raise their hands and say what they think a solution to that situation might be. It’s been extremely successful. Every year there’s a comedy play they put together; it’s mostly satire and celebrities from Boston get drafted to be in the play—the mayor, the city council, the head of MIT—pillars of the community in Boston are suddenly reading lines from very funny, controversial shit. I’ve been doing that every year for the past twenty years, actually. It’s fun; it’s a kids’ comedy. I’ve always had this fantasy of doing that kind of comedy so I get to really ham it up; it’s a great time. It’s a great organization.

There’s something else I didn’t to mention. I’m on the board of something called Music Clubhouse, which is an organization for kids, inner city schools where we have rooms places like the Boys & Girls Club and other places—the room is full of guitars and keyboards and drums and microphones and recording equipment and kids can go there and hang around. It’s just an alternative to hanging in the streets so they can go there and get some real serious music training. That has been going crazy and growing ever since it started about six years ago. They have a thing every year, that’s sort of a talent show, I just got some video footage from it. You wouldn’t believe what some of these kids are doing. They’re so talented; it blows my mind. You can check that out online at musicandyouth.org and you can probably hear, they probably have a couple of posted that the kids have done. It will really surprise you.”

What’s up next for Aerosmith after the Let Rock Rule Tour?

“We don’t know. Joe has a book coming out, but we have not sat down and figured that out yet. I have a feeling that more touring will come up for next year. We’ll be done in mid-September. My guess it that we’ll be off until some time in 2015, at some point. You never know what’s going to come along; it’s unbelievable, the kind of things that can come down the road with the Internet and all. There’s so many different ways to… so many different things can happen.”

Tickets are on sale now through Live Nation at www.livenation.com.

The North American “LET ROCK RULE” tour dates for AEROSMITH and SLASH featuring Myles Kennedy and the Conspirators are as follows:

Q&A With Los Angeles Band, We Are Kings and Queens Who Mix Heartfelt Vocals With Ambient Sonic Soundscapes.