There is a quote from Calvin Coolidge that my dad kept on his desk.  That quote pretty much sums up his persona. 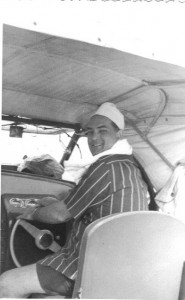 Here’s the Quote.  “Nothing in the world can take the place of persistence.  Talent will not; nothing is more common than unsuccessful men with talent.  Genius will not; unrewarded genius is almost worth a proverb.  Education will not; the world is full of educated derelicts.

Persistence and determination alone are omnipotent.  The slogan ‘Press On’ has solved and always will solve the problems of the human race.”

Emanual Wright was my dad.  His persistence saved my life.

When I was an infant, I was in the hospital critically ill.  My existence was on the brink.  My condition was not improving.

Before you could blink an eye my father swooped me out of the hospital crib and carried me in his arms to a physician who made the correct diagnosis and made me healthy.

I can tell you without a doubt, if not for my dad’s determination, I wouldn’t be here today.

My father had quite a life.  During World War Two my dad was a ship’s radio operator in the Merchant Marines.

After the war Mannie was quite the entrepreneur.

Fresh into civilian life he ran a photography business.  It was his idea to have kids pose with Santa during the holidays at Bamberger’s department store in Newark New Jersey.

A few years later he established what eventually became a highly successful industrial heating and air conditioning business based in New York City.  During the early years, before he could afford an office, he ran the operation out of a telephone booth.

It wasn’t unusual for my dad to work 18 hour days to provide a good life for my mom, my sister, and myself.

Despite his crazy schedule, my father tought me life’s values.  Always strive to be the best you can be.  And, always try to do the right thing.

My dad was way too young when we lost him 27 years ago.  To this day I still miss him for his guidance, and most of all, for his love.

I hope you have a nice story about your dad.

If he’s with you here, or in spirit, send him your love.  Not only today, but everyday.