Def Leppard is set to launch a three-month trek across North America with Poison and Tesla in tow, starting this Saturday, April 8 in Manchester, NH. No strangers to rockin’ stages worldwide, Def Leppard also just premiered the live video for “Animal,” which comes off the group’s brand new concert film, And There Will Be A Next Time – Live From Detroit.

Def Leppard – Joe Elliott, Phil Collen, Vivian Campbell, Rick “Sav” Savage and Rick Allen – have sold millions of albums and performed in front of millions of fans worldwide, stamping their indelible mark on rock and roll that will endure for ages to come. Their canon of melodic hard rock songs serve as unforgettable snapshots – photographs, if you will – in the lives of their millions of fans.  Earlier this week, I had the pleasure of speaking with Phil Collen about the impending tour, the just-released concert DVD, the state of hard rock in today’s software-driven music industry, Ed Sheeran and more. 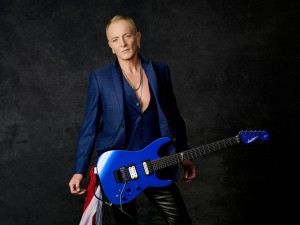 I’m great! How you doing?

I’m good. It’s great to talk to you again. You and I go back many years to my days at KLOS in Los Angeles, my years producing Rockline, and my time spent at the Album Network.

Yes, indeed! Well we’ve got lots to get to today, so jump right in. The North American tour with Poison and Tesla kicks off this Saturday in Manchester, NH. I’m speaking to you from Sacramento…

Oh, yeah, my other home!

Yes, I know. And obviously home to your boys in Tesla.

I’ve spent more time there in the last six months than I have at home. It’s really cool.

So, let me ask this, how long have you known the boys in Tesla? When did you guys first meet?

I went onstage – me and Steve Clark – went onstage with them in Amsterdam in 1986. That was the first time we met them and we’ve know each other ever since. So, it’s a really close thing, it’s a close friendship, and it’s really, really super cool.

I know you’ve been in the studio with them. You wanna give us a little information on what you’ve been doing with them?

Sure! I’ve been producing the new Tesla album. Obviously, we’ve been touring together for the last year and a half, so we got a lot of it done backstage. We’d find a dressing room or a trailer or a hotel room or something and record guitars and bass. And we’d record the drums and lead vocals at [Tesla bassist] Brain Wheat’s studio in Sacramento. The greatest phrase I’ve heard so far [about this record] is that it sounds like the rock version of Sgt. Pepper’s. It’s really diverse. It sounds like Queen one minute, Led Zeppelin the next, The Beatles the next, but very much like Tesla. It’s amazing! I’m really excited about it.

Wow, man, with that description it wets my appetite to hear it even more.

I’m gonna be speaking with [Tesla drummer] Troy [Luccketta] tomorrow so I’ll dig into it a little bit more with him.

As I mentioned earlier, Poison is also on the bill for the upcoming trek. To what extent do you guys – you, Joe, Rick, “Sav,” Vivian – get involved in putting a package tour like this together?

Someone else does it. They say, these guys are available, we think this would work out. So, that’s pretty much it. It really depends on when the stars are lining up; whether someone’s actually around. What I love about this tour and the three bands is that none of the three bands have ever broken up and done a reunion tour as such. It’s the original bands, more or less, so the integrity is there.

Speaking of concerts and tours – what was the first concert you ever went to?

Deep Purple’s Machine Head tour in 1972 in London. That made me start playing guitar. It was so profound. I was front row – Ritchie Blackmore smashing a guitar, the band were on fire, and it was just amazing. And that really started off the whole thing for me.

In these conversations, I often ask the proverbial Beatles On Ed Sullivan moment. So, would you say that was it for you?

Yeah! I got home and I said, mom, dad, I’ve got to have a guitar. I got an [Gibson] SG first, but my third guitar was a [Fender] Strat just like Ritchie’s. Years later he came onstage and jammed with my other band Girl and he actually played my Strat, which was pretty cool.

Staying with the concert theme here, talk a little bit about Def Leppard’s new concert DVD And There Will Be A Next Time – Live From Detroit.

Absolutely. Well, we tour every year and we get better every year and everyone kept saying, ‘Guys, this is the best we’ve ever seen you,’ so we decided to document it. Detroit was the first show to sellout on last year’s tour so we thought, well that’s a no-brainer, let’s record it there (laughs). That’s really what we’re promoting on this tour. We’re going to a lot of the places that we didn’t hit when we did that last tour. Everyone always goes, ‘Why don’t you come to our town?’ Well guess what, we are (laughs).

In prepping for the conversation this morning, I saw that you recently told the website Music Aficionado that during the Pyromania sessions [producer] Mutt Lange handed you a tape and asked you to learn the song “Stagefright” and then told you to come in with a solo the next day.

Yeah, and I didn’t realize that the band wasn’t doing one take – it’s not really a one take kind of band, but that was it, I just blazed a solo and that’s the only one first take on the album, and still is, I guess. Mutt Lange was so hugely responsible for everything that the band did. He kind pushed us all and influenced us all and made us way better than we really were. We owe a lot to Mutt.

Would you go so far as to say Def Leppard invented something like melodic metal, or are you guys just the masters of it?

No, I think Aerosmith were doing a similar thing, but it was a bit more bluesy. And again, it’s Mutt Lange. He’s got a knack of creating a hybrid. Most people stay in narrow [musical] parameters. They don’t step too far out of their genre. And I’ve always liked the fact that you can mix Motown with hard rock, with blues, with funk, and everything. That’s really what he did – he actually said, okay, we’re gonna make a pop song, but make it a real rock band. What Mutt made us do is if we did like a Queen song, play it like AC/DC and sing it like The Sex Pistols, and all of a sudden you have a unique thing. That was the hybrid he tried to put over to us. Mutt said to us, with Hysteria, let’s do a rock version of [Michael Jackson’s] Thriller and make it crossover.

So, your stuff aside, what do you think is the best hard rock/metal riff ever recorded?

Ah! You know, my ringtone is “God Save the Queen” by The Sex Pistols. It’s just got so much firepower in it.

Right! Well, we’ve got a live album in the can that we recorded last year that will be coming out this year. And we’re gonna start work on our second studio album. I’m kinda crazy busy all the time, but it’s great to do all that. I just love being inspired and following that kind of muse, if you like. 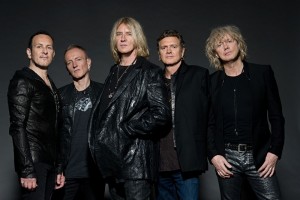 What do you think about the current state of hard rock and heavy metal music in terms of record sales? And I’d add, you guys aside because your last album [2015’s self-titled] kicked ass.

Oh, thank you! Yeah, I think music in general has changed. The industry has changed so much. It’s basically two record companies and their subsidiaries and they only really care about five artists, you know, Beyonce, Taylor Swift, Coldplay, Bruno Mars, Ed Sheeran. It’s great stuff, but there’s no nurturing that goes into other bands – of any genre – not just rock music. So, you have to approach it in a very different way. I actually like the way Ed Sheeran came about. I’m kind of surprised at how huge he is, but this guy used to busk at train stations with a guitar and a [loops] pedal. He just worked really, really hard, and all of his work paid off. I think that’s inspiring. And he writes really good songs! That’s what you have to do if you wanna make it in this day and age. A lot of people whine but they’re not prepared to work hard. And that’s really what you have to do. I see a lot of musicians who are very, very lazy.

Yeah there’s no substitute for hard work. From what I understand, Ed got some pretty good advice from Elton John, who obviously knows a thing or two about having a successful career.

Absolutely! And actually me and Steve Clark once sat with Elton for about four or five hours and he was telling us these amazing stories about his career, and what to do, what not to do. He’s an amazing guy, apart from being an amazing artist, and we got a lot out of that conversation.

And apparently, so did Ed Sheeran (laughs).

Final question about the tour for you, Phil. The itinerary includes a fair share of smaller markets, like Fresno, CA, Bozeman, MT and Pryor, OK. Are some of these markets some that you’ve never played before?

I think we’ve played everywhere at some point, but some of them we haven’t been to in, like, 30 years. It’s cool to do that because some people don’t have the opportunity to travel and it’s really good to come to them, so that’s really what we’re doing.

Cool, Phil, so, thanks for your time…

…and it’s great to chat with you again. Take care.

Okay, sounds good. See you in a bit. Bye.

An Interview With Pop Singer RENAE On Her New Music All About Chakras!

An Interview With American Idol Finalist JAMES DURBIN About His Latest Band, MAPS TO THE HOLLYWOOD SCARS!