The two of us have worked in the worlds of broadcasting and music in some way consistently since we were teenagers. Therefore, when we heard that one of the perks of our new partnership with All Access Music Group was representing them at the New Music Seminar in New York City last month, we were thrilled.  Attending one of the industry’s  largest and most exclusive seminars allowed us to explore all things new in music and media, while coming out of it with a lot both personally and professionally.  After returning to the office to go through several hours of recorded audio notes, we realized that genuinely passionate music fans would want to hear these notes as well. So, we decided to write a detailed account of the experience from our point of view, and give you recordings of some of the best panels from the seminar.  The hope is that you’ll be able to get a very real idea of the current state of the mainstream music industry, and consider attending the seminar next year.

Through the provided links below, we try to give you a detailed account of what happened at each panel, while also weaving it into a larger narrative about the experience as a whole. We hope you like this new kind of All Access feature. Enjoy.

The New Music Seminar was founded by Tommy Boy Records head Tom Silverman. He started it as his way of being part of what he described as the music revolution of 1980s. He was able to see that revolution coming because his past as a college DJ, Disco journalist, and later running a label. Doing these things taught him an entrepreneurial business acumen that uniquely fed his passion for music and the excitement that surrounds it.  We saw that passion and excitement for ourselves when we first met at the seminars opening music festival concert at New York Citys Webster Hall.  A whos who of industry on lookers watched bands like Baby Bee, and 2 AM Club did their thing, and we watched Tom Silverman love every second of it. 33 years after the first New Music Seminar, he was once again filled with excitement, and this time it was because of a technical revolution that he believes will grow the music industry into a hundred billion dollar business.

The Clizbes Reflect On The New Music Seminar

Reflections On The New Music Seminar

State Of The Industry

Reason To Be Cheerful 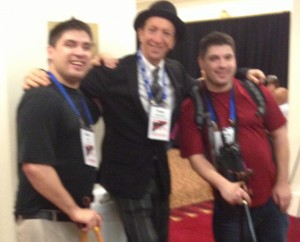 When it was all said and done, we were honored to be the guests of Tom Silverman and his wife during the 2 and ½ day period that was The New Music Seminar. We had a lot of fun, and walked away with some great memories. Some personal favorites include learning about Musicmetric.com, a data collection system that keeps track of all aspects of most artists online activity. (downloads, Facebook likes, press mentions, VEVO rankings, and plenty more) We loved watching quality new bands like Krissy Krissy, Down Beat Keys, and Air Traffic Control rock their energized performances.  Finally, we appreciated running into Atlantic Records CEO/Chairman Craig Kallman. Hes been supportive to us in the past, and it was great to see him.  Attending the New Music Seminar reminded us why we love what we do, and we cant wait to get our piece of Tom Silvermans dream of a $100 billion music business. Cheers!