On May 13th, a few of us from All Access Music Group were treated to a Serena Ryder show at the renown West Hollywood venue, The Troubadour. 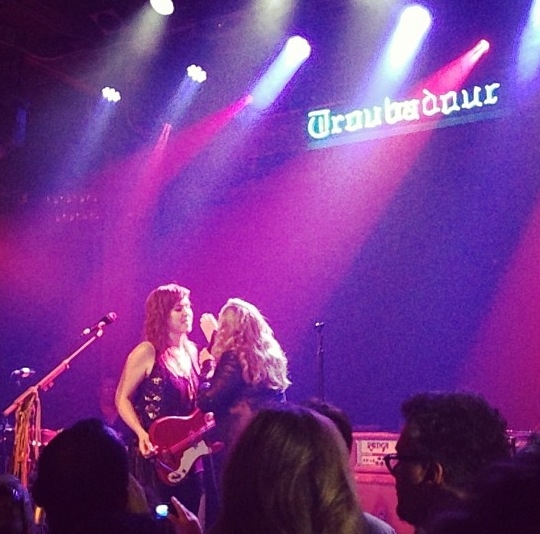 With a beautiful and powerful voice, and infectious love of music and playing live, Serena Ryder had the crowd clappin’ their hands and stompin’ their feet through every song. It was lovely to see so many people already true fans of her’s and knowing all the words to her songs.

Ryder and her terrific four-member band played several songs from her new album entitled “Harmony,” along with some all-time favorites like “All For Love” from her 2008 Juno Award winning release Is It O.K. Her current hit single “Stompa,” “Baby Come Back,” “What I Wouldn’t Do” and are indeed all “jump out of your seat and dance along” tunes.

A big highlight of the show was when her long-time mentor, Melissa Etheridge, joined Ryder up on stage to help her sing “Merry-Go-Round”. The pair’s voices effortlessly flowed together.

Ryder’s sparkling personality also shone through when introducing a Nina Simone inspired new song, “For You”. Her voice was incredibly powerful, passionate and raspy; reminiscent of the likes of Amy Winehouse and Stevie Nicks, as she hit high notes and belted choruses with ease.

Serena is currently touring in support of her enormously successful album Harmony, which is nominated for two 2013 Juno awards (Adult Alternative Album of the Year and Single of the Year for “Stompa”).

Serena Ryder is the perfect musical combination: beautiful voice, charming personality, engaging stage presence, brilliant songwriter, and a bundle of energy. I highly recommend you catch her on this tour and if you are lucky, at a smaller venue too.