Calvin Harris Knows How To Throw A Really Good Party. 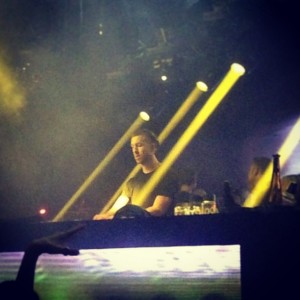 On Saturday, June 29th, Calvin Harris, GRAMMY Award-winning artist and resident DJ of Hakkasan Las Vegas returned to the nightclub to perform to a sold out crowd.

The highly acclaimed DJ debuted his residency at Hakkasan in April, and is set to perform 46 dates at the nightclub. Additionally, he will bring his residency to WET REPUBLIC Ultra Pool, also located at the MGM Grand, creating a daytime experience for fans where they can see the iconic DJ perform 22 dates.

Harris, has pulled in an estimated $45 million over the past 12 months, currently making him the highest-earning DJ in the world. With neck scruff and a think Scottish accent, the 29-year old songwriter and producer is the face of the electronic music revolution. Like many of the world’s top-earning electronic acts, the Scotsman earns the bulk of his money from his life on the road, where fees in the high-end market like Vegas could hit $300,000 for a single night’s work. Harris says he also enjoys Vegas because of its pop expectations.

“It’s kind of in that respect challenging as well, because it’s like, if you play too much hardcore club music people aren’t going to like it because it’s a lot of casual club-goers,” he explains. “They’re not all electro EDM-heads.”

In the main room of the nightclub, Burns warmed up the sold-out crowd for Calvin and had guests on their feet as he played hit after hit during his pulsating DJ set as gorgeous dancers dressed in elaborate costumes showcased spectacular choreographed dance moves.

Simultaneously, in Hakkasan Las Vegas’ 10,000 square foot, Ling Ling Club, celebrated DJ Ross One was found behind the turntables spinning for a packed room as the Samurai-dressed atmosphere dancers took their place on the platforms and performed for the crowd.

Within the Hakkasan Las Vegas space there is a restaurant with phenomenal private dining with tables overlooking the restaurant, a super high-end mixology lounge, a secondary nightclub and a main room nightclub that can be compartmentalized to have a third room nightclub. 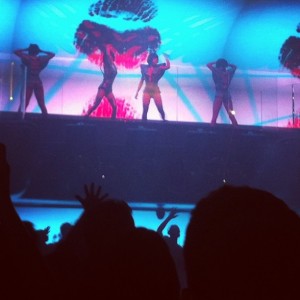 Just after midnight Harris and his guests, were escorted from the restaurant and to his VIP table behind the DJ booth in the main room. After relaxing and mingling with friends, the renowned DJ and producer stepped into the booth where he took his place behind the turntables and began his heart-pumping set.

On this packed Saturday night, all Harris was responsible for was an SD memory card, which he slid into the DJ decks just past 1 a.m. before launching into his self-written hit, “Awooga.” That track and others like it serve as a major component of the Scot’s major earnings. Unlike most of his electronic music colleagues, Harris has a songwriting background that dates back to his first career when he toured with a full band and sang as a frontman.

The energy in the room skyrocketed as fans cheered at the first glimpse of the celebrated artist. Throughout his set, Harris played fan favorites, “Feel So Close,” “We Found Love,” “Sweet Nothing,” and more as confetti blasted through the air, keeping guests on their feet and the party going ’til 5 a.m.