On Sunday, July 29th, one of country music’s most eligible bachelors, Brett Eldredge, proved to fans during his sold-out show at the Orange County Fair’s Pacific Amphitheatre that he’s got it all.

The “Drunk on You” singer revealed to the audience that when he was starting out he never thought he would sell out a show on a Sunday night. But he was sure in shock.

The show started with an energetic “Something I’m Good At,” then proceeded to his current single, “Love 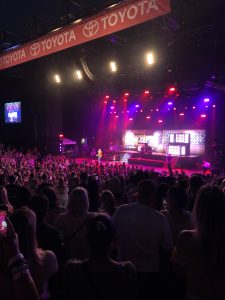 Someone.” Not only did the crowd sing along to every song, he spiced it up with a cover of Kanye West’s “Gold Digger” and concluded with sweet acoustic versions of “Raymond” and “Mean to Me.”

But there was one special guest that stole the hearts of many during the show and that was the appearance of Brett Eldredge’s dog, Edgar Boogie, who treated us all with his beloved tricks. 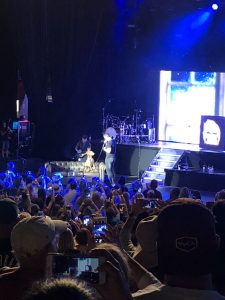 Brett Eldredge will continue playing shows throughout the summer before he embarks on his The Long Way Tour. The tour kicks off September 13th in Denver along with some fellow artists Devin Dawson and Abby Anderson (see below).

RUBY VELLE & THE SOULPHONICS Discusses Their New Music, Favorite Touring Memories So Far and Much More!

The LA-Based Singer-Songwriter KRIS ANGELIS Discusses Her Brand New EP ‘Pieces That Were Stolen’ And A Lot More!