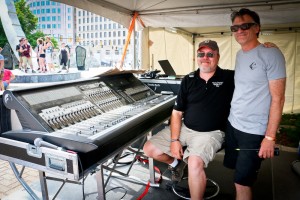 Since its inception in 2000, Movement Electronic Music Festival has drawn tens of thousands of people to Detroit’s Hart Plaza. The internationally acclaimed annual festival, held during Memorial Day Weekend, began as a free event billed under Detroit Electronic Music Festival (DEMF) and later changed its moniker to Fuse-In as a paid event. In 2006, Paxahau took control of producing the festival, bringing 2014’s three-day experience to its ninth year running under the Paxahau “Movement” name and closely matching the attendance rate of 2012, which was approximately 107,000 paid tickets.

While Movement revolves around celebrating Detroit’s rich techno culture, the mass amount of production and work that go into the festival are often overshadowed by the music. According to Production Manager Michael Fotias, the Paxahau team works year-round on the event and also replicates Movement production in other cities.

“We never stop,” he says. “Part of that is because Paxahau has grown and now we have clients, so if they have a festival, we take our matrix of producing a festival and produce that client’s festival for them. It includes everything—artist management, booking, show time. The whole team is basically brought in to produce shows for clients.” 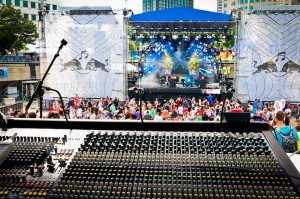 An example is the recent Moogfest in Asheville, NC, which reeled in Paxahau to manage production for the first time. The same base is used for Movement, with Fotias and his team in charge of many crucial aspects. “My guys and I handle everything that’s related to the technical side to do this event—so that’s sound, staging, lighting, electrical, video, and also all the logistics for that,” he says. “We also oversee all the designs, the engineering, and then beforehand, the planning—plus all of the needs of the artists, like what CD players and what mixers/turntables [they use] and how high their countertops have to be. Basically, everything that’s in the rider.”

“Then there’s the actual show time side,” he continues, “seven days of getting all the technology in here [at Hart Plaza] and meeting all local, state and federal codes for safety and what not, and getting it all layered in in a timely fashion for opening day.”

Load-in and setup begins approximately one week before the festival, with over 200 people working during its peak the Tuesday before Memorial Day Weekend. Following festival closure, the crew has three days to tear everything down. 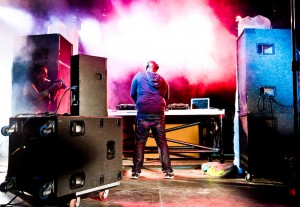 During Movement, Michael works closely with his brother Sam Fotias (Paxahau partner and Director of Operations for the event) on assembling a production team to make the vision of the company a reality. All six stages (Red Bull Main, Moog, Beatport, Silent Disco, Made in Detroit and Underground) are equipped with a Stage Manager (such as Kevin Reynolds at the Made in Detroit Stage) who oversees front-of-house action alongside a sound engineer, as well as stage hands and lighting/video engineers to make sure all aspects of production run as planned. These people work together on tasks such as balancing sound, which is at approximately 10% in the afternoon and 95% at night when the plaza fills up. The Red Bull Main Stage alone held 108 amps at 12,000 watts each, all regulated by production.

The rest of the production team consists of Fotias’ son George, special operations members (such as Mark Walls), volunteers and Fotias’ main assistant Craig Rathwell, who handles what is called the “show time department.” Alec Thorne, IT Manager, runs the systems DJs use and works directly alongside Rathwell. The group manages production for festival after-parties as well. When we spoke to Fotias, a crew was loading out sound from Bleu nightclub and transferring it to Saint Andrew’s Hall for the official closing party later that night.

With approximately 25 people in his team, Michael Fotias’ work often crosses paths with that of his brother. Sam Fotias’ team consists of about 50 and handles oversight of the event. The rest of the Paxahau group includes Chuck Flask (who works with booking and artist management), Jason Huvaere (president of the company), Jason Clark (creative director), Dana Boyette, Ernie Guerra in marketing, Geri Bushey and Lauren Metcalf in office management, Morin Yousif with media/communications, and more.

The members of Paxahau, production and operations teams, those involved in festival setup and teardown, volunteers and many others work hard to pull Movement together each year and ensure patrons receive nothing but the best experience. Due to the combined effort, this year’s smoothly-run event played host to over 120 artists, with Detroit collective Underground Resistance headlining. Other major draws were Claude VonStroke, Green Velvet, Maceo Plex, Richie Hawtin, Carl Cox, Escort, Jeff Mills, J.Phlip, Action Bronson and Loco Dice. 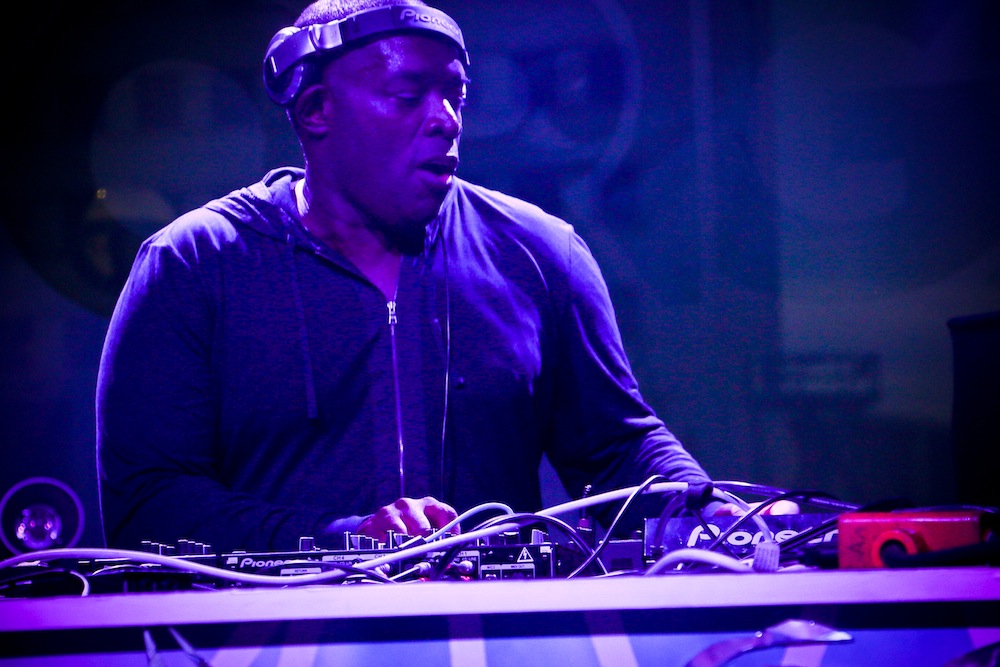 There was also an array of internationally-recognized local talent on the Made in Detroit stage, a festival favorite, including “Origins” presented by one of the founding fathers of techno, Kevin Saunderson, plus Eddie Fowlkes, Seth Troxler, Detroit Techno Militia, Kevin Reynolds, Mike Huckaby, Stacey Pullen, Gabi and Keith Kemp, to name a few. After-party highlights included label Ghostly International’s 15-year showcase with Matthew Dear and Shigeto, Red Bull Music Academy and Soul Clap’s House of eFunk featuring George Clinton, OK Cool with Seth Troxler and Martinez Brothers, Country Club Disco featuring numerous Dirtybird label artists and a sold-out festival closing event with Maceo Plex and Loco Dice. Fotias, along with the rest of the Movement crew, just want attendees to have a good time and leave with fond memories of the festival.

“I want fans to leave with an experience that meets or exceeds all of their expectations,” he says. “When patrons decide they are going to an event, they paid some kind of dues to get there, like saving money from their checks and taking time off work. So they’re coming there with an expectation of a certain experience, and we owe it to the patrons [in producing that event] to give them that experience.”

After pausing for a brief moment to instruct team members on transferring sound, he adds, with a smile, “That’s what’s most important to us.” 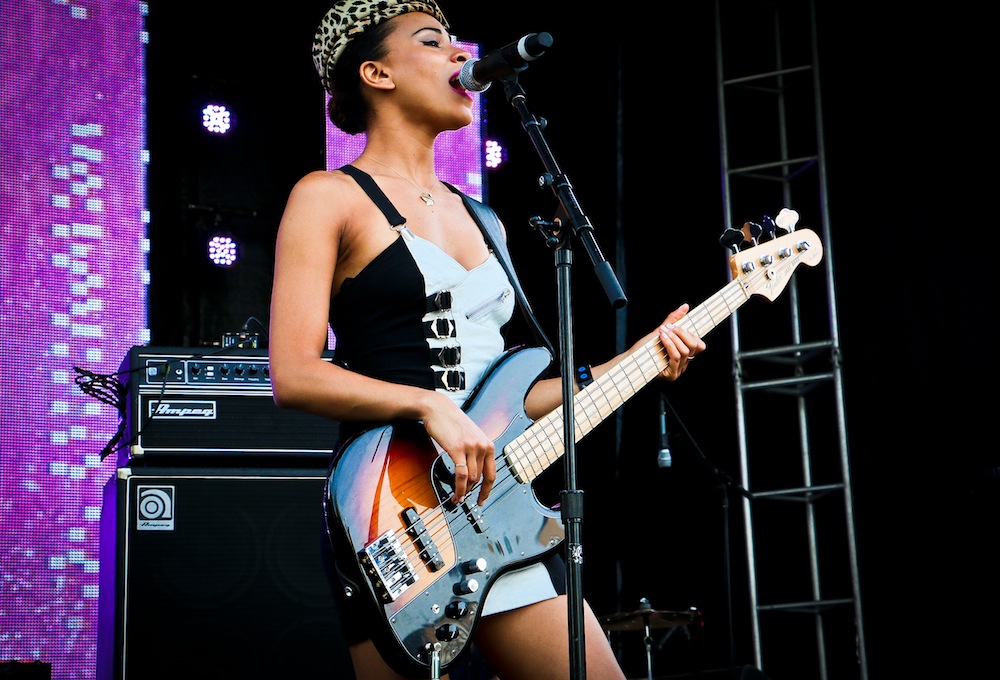