From the moment Banks took the stage at The Depot in Salt Lake City the entire atmosphere of the concert venue altered. Appearing in a veil, backlit, her movements seamlessly in sync with the jolting beat of her song Poltergeist, she created an ambiance of mystery and sexual tension that carried throughout the show.

Since her 2013 debut, Jillian Banks has steadily curated her artistry. Consistently matching her lyrics to a melody that compliments and reinforces the emotional impact of her sonic creations. The Alter Tour (2017) exemplifies her extension into the next phase of her artistic expression. From seeing The Goddess Tour (2014) to now, it is evident 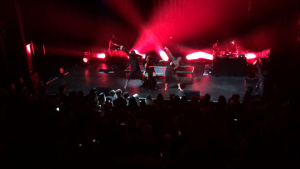 Banks has found her artistic niche. Three years ago, her timid, dark stage kept her in the shadows, leaving the audience wanting more, and The Altar Tour is giving fans just that. While she kept a minimalistic dark set up, one simple elevated platform with two back-up dancers, it felt as though you were being transported into a different dimension of performance art, almost as though the backup dancers were an extension of Banks herself. Three people unified by movements so tight and connected with one another you would have thought they were from the future.

Creating sexual tension and intrigue with nothing but a microphone and stand isn’t an easy feat, but Banks accomplished one of the most alluring and captivating live shows with simplicity and tact. With no backdrop, no image reel distracting you from what she was creating on stage, she was the only entity your eyes were drawn to… you might not be able to get Banks to the altar, but your eyes follow her around like a dog that needs water. Rather than have a spotlight on her, most of the show was back-lit, building on the intrigue and desire to see what was beyond the shadows.

Incorporating this visual aesthetic struck a chord on an intrinsic level within many people in the audience. Although the show was sold out, each song felt intimate, personal, and transcendent. The culmination of her sonic emotions, the methodic art direction, and the authenticity of her journey to finding strength in vulnerability gives Banks one of the most commanding stage presences ever witnessed. Catch her on tour this fall and find out for yourself, www.hernameisbanks.com.