An Interview With The Unique Metal Band, HOMERIK! 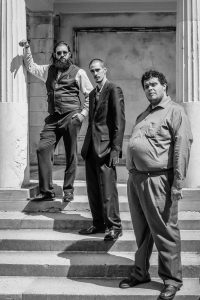 Homerik takes on an unusual role in Metal music. At the helm is our core trio: composer/lyricist Kenneth Candelas and lyricists Andrew Petriske and Obed Gonzalez. However, what lies within each piece is much more than that. Homerik’s debut album is better described as a major collaborative effort by friends and colleagues in and around New York City.

Inspired by world and classical genres, and various styles of Metal, Homerik seeks to amaze audiences with large scale productions and interactive performances. With influences from Norse culture, Egypt, Spain, Eastern Asia and many more countries around the world, their music is approachable by all listeners whether they are devout fans of the Metal genre or not.

Learn more about Homerik in the following All Access interview:

What are some words you would use to describe 2016 for this band and your music? What were some of the highlights? What has been the most exciting part about this year?

Hard work, dedication, love, persistence, patience. Recording our record was a huge deal. When Obed Gonzalez recorded his vocals with Ken Candelas and Andrew Petriske, it solidified his desire to become part of something great. During that summer, after the death metal band Nile played a show at the Gramercy Theater, Ken and Andrew were inspired to do an overnight recording session for their Celtic piece “The ‘Ire’ of Green”. It was a long night that produced one of their favorite tunes. Later that year, the trio worked on creating the soon to be revealed “A Song of the Night: Part I” music video – a project that will give the world the Homerik experience.

The most exciting part of 2017 is the development of our fanbase since launch day on March 1st. We are reaching out to fans all over the world, interacting with them and getting to know them while building a community of like-minded individuals.

Growing up, did you all always want to be musicians? Can you recall the moment you realized that you could really make music together and be a band? How did you all first meet each other?

Ken decided to pursue music in college after realizing in high school that it was his calling. His experience in audio engineering led him to work tours and high-profile jobs in the industry. Andrew always wanted to be in the limelight since age 9, singing and performing in local bands throughout high school and beyond and consistently working on his craft. Obed’s father was a salsero that inspired him to pursue a career in music. After neglecting to take action over the course of several years, Obed decided it was time to put his foot down and make something out of his talent.

Initially, Ken was unfamiliar with Obed’s style and wasn’t sure how it would play out in the recording of “Into the Pits of Oblivion & Unforgotten Kin”. Upon execution and support from Andrew, it was clear that their future would be a fruitful endeavor. Ken and Obed had met for the first time over an online game of Gears of War 3 around 2015, while Andrew and Ken met each other during their day jobs at AMC Theatres. Obed and Andrew met each other through a mutual friend over a decade ago. They had entered a party and met when they participated in drinking their friend’s signature shot. Several years later that friend passed away, and one of Homerik’s songs is dedicated to him (Konrad Cunningham): “An Angel of Darkness”.

Was it hard to narrow down a band name? How did you finally decide? What other names were you considering?

Not at all. We had figured it out early on. Through a mutual consensus, the band name came to us organically. Another name we considered was Opus, but that was a project Ken had made in high school with his guitarist at the time, Cory Boyle. Homerik was a different project altogether, and so they decided against it. 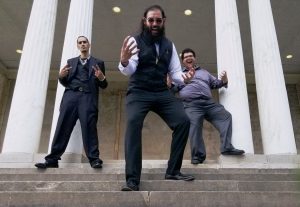 Let’s talk about where your sound came first came from. Was it something that just organically developed once you all started playing music together?

We were initially inspired by Ensiferum and Wintersun. Our song, “The Legion” was the first song we wrote, inspired by Norse culture and folk metal. They wrote the guitar part first, and Ken incorporated the orchestral samples along with it. Using heavy thunder drums, they created a sound which gradually formed into their iconic sound. Homerik took their time creating their material. It’s the reason why their album took three years to create. When the three are together, they produce content that’s a force to be reckoned with. They are the rock, heart, and soul of the band.

Can you elaborate on how you are being influenced by Norse culture, the music of countries like Egypt, Spain, and Eastern Asia? How do you incorporate all of this into your music?

We composed the cultural side of the music first. If it was flamenco inspired, we wrote the song like a flamenco song. The metal was meant to enhance the experience and make it heavy. Every song that you listen to is a different world. It allows you to experience a mythical land while still have the familiarity that you know and can feel: the metal.

What was the inspiration for your current singles “Curse of the Black Nile”, “Wendigo” and “A Song of the Night: Part 1”? Generally, how do you three go about putting a song together? Can you describe your process?

The inspiration for “A Song of the Night: Part I” came from feeling alone, and knowing that you shouldn’t feel alone. That there’s someone out there who cares about you. The song was also meant to bring awareness to domestic abuse. It was written in Ken’s bedroom and the first words “Hey sister, where are you about?” that sparked this dark story about love, trauma, and hardship. It became the prologue to something much deeper…

“Curse of the Black Nile” is all about being isolated and being alone. As you experience your imagination and listen to this Ancient Egyptian curse of the pharaoh, you’re letting out inner demons in a healthy way. This piece was spontaneously created after Ken had worked on a mixing gig for another band. Andrew and Ken were so pissed off at the lack of quality songwriting that they created “Curse of the Black Nile”. That band was the motivation to do what they do today.

“Wendigo” was a specific goal for Ken. He had always wanted to compose an African tribal piece. The main theme that the strings play during the chorus was originally an idea that Ken had during his high school years in Opus. It never saw the light of day until now.

Homerik writes their music very simply: the three get together and start talking. Everything else comes after. They record voice memos whenever an idea pops up and when they create the initial composition, they develop the story and experience further.

Do you have plans to release more music and a full-length album of new songs anytime soon? 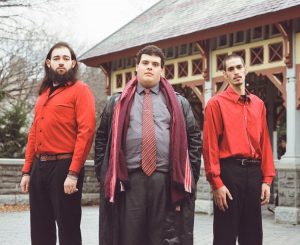 Where can people see you play live next? Any touring plans on the horizon?

Not anytime soon. Homerik is focused on building their fan base and creating a community before they perform their music live. They want to have a serious following when the time comes for them to prepare for a tour.

Who are some of your favorite artists? Who would you all work with in the future? What would be a dream collaboration for each of you and Homerik?

Nightwish, Epica, King Diamond, All That Remains, Westfield Massacre, Nile, Dream Theater, Hans Zimmer, Danny Elfman, Kurt Cobain, Otep, Chris Cornell, etc. We’d love to work with Michael Romeo from Symphony X, Jeff Loomis from Nevermore, Footage of a Yeti, clarinetist Seunghee Lee (among many other classical musicians), and much more. Ken would love to collaborate with an orchestra as Obed dreams of working with Snoop Dogg. Andrew would like to work with DevilDriver and Rammstein.

Love, passion, healing, feelings, opening the minds of others, unity. We hope people feel like they’re in another world. That they can get away from the madness of reality every once in a while.

Is there anything else that you would like to share with our readers about this band or your music?

We will be selling our record exclusively on HOMERIK.ORG. Stay tuned for footage off of our upcoming “A Song of the Night: Part I” music video. Our album drops on Halloween 2017!

An Interview With The Long Island-Based Band, PATENT PENDING!

An In-Depth Interview With The Modern Rock Group, EDGE OF FREE!