An Interview With The Pop-Rock Duo BROKE ROYALS On Their Brand New Album, Favorite Touring Memories and More! 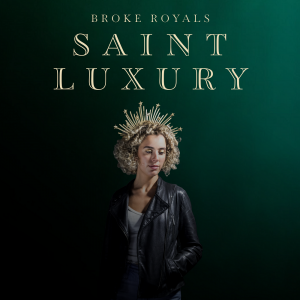 This collection is three years in the making — and it’s a full-on concept record that digs deep, questioning many of the ideas that we’ve been fed all our life (societal norms, faith, adulthood, etc.). The story unfolds through the eyes of an angel (Saint Luxury) that comes to earth in search of her own answers. The band’s hope is to satisfy music fans with intellectual and musical curiosities. It marks a significant career accomplishment for them.

Listen here via Soundcloud and Spotify!

Broke Royals is made up of Philip Basnight and Collin Cross. They write songs that are made for stadiums, but they connect on a gut level like they’re being played to a packed bar whose crowd almost drowns out the PA. The nuance, raw emotion, accessibility, and directness of their sound almost go unnoticed because it just feels so organic, as if their songs wrote themselves. “Saint Luxury” is their best effort by far. This second full-length is a concept record in the spirit of Sgt. Pepper’s. It’s the journey of an angel who’s had it with Heaven and stumbles into Saviordom when she lands among us mixed-up locals. But it’s way bigger than one character’s arc; it’s the soundtrack to an entire world.

Learn more about Broke Royals in the following All Access interview:

We are currently resting up for the final show of our GOD BLESS SAINT LUXURY Tour. We’ve played 12 shows in 10 days across the Midwest and East Coast and we’re closing out tonight in our hometown, Washington DC.

Now that we are into the 8th month of the year, how would you say that 2019 is treating the band so far? What have been some goals this group has had this year? How close are you to reaching them?

As a band, this year has all been leading up to August! Our sophomore album, “Saint Luxury,” came out on August 2 and we hit the road for our tour on August 7th. We’ve already received great write-ups and playlists and we’ve played some of the biggest shows of our career this year.

Can you recall the moment when you thought you could be in this group together? Was it hard to think of a name that you could agree on? Has anything surprised you about this musical journey so far?

We started as a studio project when we were still in college at William & Mary in Virginia. Colin invited me to record some demos in his brand new home studio so that he could shop them around to potential clients.  It was supposed to be a short project but it was clear we had stumbled on something great and, five years later, we still love writing music together.

DC is known for genres like Hardcore and Go-Go and, while we don’t really fit in those categories, we the spirit of our music to keep with those traditions; honest songs that speak to the life of our community.

Let’s talk about your brand new album, “Saint Luxury” that was just released. What was it like putting this collection together? Did anything about the overall process surprise you guys or challenge you in any unexpected ways?

These songs were written over the course of many years but they fit together with an overarching theme and musicality. Sometimes the album screws towards pop and sometimes it leans rock but we took care to make sure a few core elements like big harmonies, resounding drums and, thoughtful lyricism tied everything together.

Can you elaborate on how this is a full-on concept album? What that always your intention from the very beginning of making it?

With this album we wanted focus on the idea of asking good questions and not fixating on answers.  Often, the people who say they have all the answers are really just trying to sell you on something.  We tied that together with the character of Saint Luxury, a runaway angel who leaves heaven in search of big ideas.

While it’s difficult to pick, can you choose a few of your favorite songs on this album and talk about their inspiration and how they got to be on “Saint Luxury”?

Personally, I love “Born To Break” because it has strong hints of Bruce Springsteen. He’s one of our musical heroes.

Generally, how do you guys go about writing your music? Do you write together or separately?

Generally, things get started as demos with an acoustic guitar but get fleshed out together as a band, in the studio, or even back and forth over email sometimes.

I always like to ask bands if you all hang out socially apart from the music? In other words, when you aren’t working on music, do you guys enjoy hanging out for fun?

Oh, definitely.  We gel super well as a group.  We have a lot of overlapping favorite comedians and musical favorites so any excuse we can use to get together, we do.  We just love and support each other in any way possible.

How do you feel that this band has grown through the years? What has remained the same?

This band has grown tremendously over the past 5 years.  We figured out the right balance of our pop and rock influences and how to incorporate them both on stage and in the studio.

In terms of happiness, I think we all get different kinds of satisfaction from both.  There is something about the moment in the studio when it all starts coming together and you just sit back and go “wow, that’s cool” that is unique.  In a similar way, when we’re playing a show and everything is just connecting with the audience, there’s an experience that can’t be beat.

What has been a favorite show of yours in the past?

This year we headlined Washington DC’s Petalpalooza and it was crazy.  We played on a pier and in front of us was just a total sea of people.  As soon as we finished our set, fireworks went off directly behind the stage.

How was your recent tour? Any favorite venues?

The GOD BLESS SAINT LUXURY tour was amazing.  We played some of the coolest venues across the midwest and east coast.  I would definitely say Mercury Lounge in NYC is amazing, but it is always hard to beat playing at home in DC.  DC9 is always fun.

How has social media impacted this band? How often are you all on your different sites interacting with fans? How have you been able to utilize it through the years?

Social media provides such a unique way experience with fans.  Being able to share in excitement and successes with bands in real-time is so awesome.  We are definitely interacting with fans on all platforms on a daily basis. 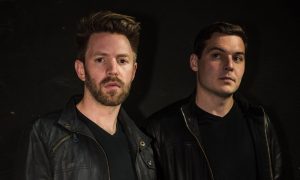 today? Do you find that your music is an escape to all the current events?

Music provides an opportunity to escape or lean into an emotion.  We use this band to do both at different times and for different reasons.  We don’t believe in being divisive, but we do try to encourage critical thinking and progressing the conversation.

What musicians have really been inspiring you since you first started making music?

We’re all huge fans of Bruce Springsteen.  We can’t deny our influence by Prince, either.   But modern music like Spoon, Bleachers, and The Killers have greatly influenced our tones and sounds in the studio.

It is time to be thoughtful with our questions and not just listen to the loudest voices.  But more importantly, you can save your soul with rock ’n’ roll and Broke Royals is here with premium rock ’n’ roll to do just that.