An Interview With The NY-Based Jazz/Pop Singer-Songwriter, KAT HOLLAND! 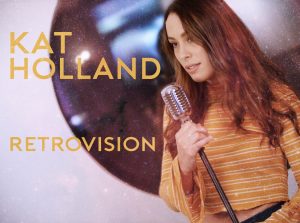 At the beginning of 2018, Holland recorded her new EP in the famed Village Studios in Los Angeles. Since then, she has been busy gigging, composing, and working with her band in Charlotte. Holland draws from many musical influences that include Norah Jones, Adele and Maroon 5.

Holland has always been a lover of all things music, recalling many fond memories of singing along and dancing to The Beatles with her father and Sarah McLachlan with her mother. “The One” is dedicated to not just her five-year relationship, but the heartache and anxiety that she experienced when they encountered a period of time when they had to live apart from each other. The EP title, Retrovision, calls to mind looking back, reminiscing about the past and longing for something in the present or future.  Holland was inspired and wrote most of the EP’s songs during this period.

“I went through a period in my life right after I graduated from college that was a rather lonely but awakening experience for me. I spent a lot of time away from people I loved –  some of the people that I was closest to in my life. What seemed like a difficult time was actually very self revealing.” – Kat Holland

Learn more about Kat Holland in the following All Access interview:

Thanks for having me! A lot has been happening lately. I actually just hosted my release party for the release of Retrovision, and it was sold out! That was super exciting.

Now that we are into the 5th month of the new year, how has 2019 been treating you so far? What are some goals that you have for yourself this year? How are those New Years Resolutions going?

2019 has been great so far. I have had a lot of different performance opportunities and met a lot of really talented people that I am going to be collaborating with. One of my biggest goals this year is to hopefully finish recording my full length album by the end of 2019! So far my New Year’s Resolutions have been going well. Obviously a lot of them had to do with pursuing my music career and not holding back, but I also had some that had to do with health and happiness, and those are going great too!

Music has always played a vital role in my life. I come from a family of musicians, so it is honestly no surprise that I turned out to be one. However, I didn’t decide that I actually wanted to pursue it as a career until I got to college.

There have definitely been times that I have considered other paths. I was very serious into soccer when I was younger and one of my aspirations was to try to play professionally. I guess if I had chosen that path that’s what I would be doing, but I know for a fact that I would be nowhere near as fulfilled as I am doing music.

I think one of the biggest surprises is how lengthy of a process some things can be. I always knew it would be hard work, but sometimes projects that you work on can take months, even years, before you are finished and ready to release it. I can be a little impatient at times so this can be tough, but it always turns out to be worth it in the end. What I have learned is that even if something you have been working on doesn’t work out exactly as planned, the lessons that you learn are invaluable. I am always growing and learning more every day in this industry.

What was it like releasing your recent EP, “Retrovision”? What was the inspiration for this collection of songs?

It was a great experience. I was lucky enough to be able to record it in The Village Studios, which was a phenomenal experience. The biggest inspiration behind my EP is love, and reminiscing on past experiences. However, I do write about personal anxieties that I have dealt with in my own life as well.

How is this collection of songs different and/or similar to any other music that you have created in the past?

I have always had a jazzy feel to the songs that I write, but I am really glad that I was able to incorporate some pop in there as well. I collaborated with some really great musicians that helped bring these song to life.

Do you have plans to put out a full-length album of new songs soon?

I do! I am hoping to finish recording a full length album by the end of this year, and release it in 2020.

How do you think you have grown as a musician since you first started singing and writing songs?

I have grown in so many ways. Vocally, lyrically, and even my stage presence has changed dramatically. It really just takes experience to get better at these things and I have finally been able to get some of that under my belt.

What has it been like keeping up with your social media accounts and all of the different platforms? Is it hard to stay up to date on it all? What would you say is your favorite way to connect with your fans now?

Social media is probably one of the hardest parts for me when it comes to music promotion. I have a hard time wanting to be on it all the time and constantly post, even though I know it is necessary in this business. I would say my favorite way to connect with fans now is at actual live shows. It is just so much more personal and real than social media connection, although I do know those connections are just as important.

I listen to so much music and all of it is so different, but I would say that some of my biggest inspirations are Norah Jones, Adele, and Maroon 5. Even with that being said though, there are certain people like James Morrison, Rainbow Kitten Surprise, and Gavin DeGraw, that I would love to work with. There’s so many others that I could name as well.

Where can fans see you perform next? Got any upcoming tour dates planned?

I will be playing a lot around Charlotte this summer, and you can go to www.kathollandmusic.com to find out more! I am also shooting to have a couple out of state shows as well, so keep a lookout!

That’s a tough question because I would really have to go into detail, but for me I think I would really like to have a lot of cool, colorful visuals, along with some casual, every day scenes combined. It would also depend on what song I am doing it with.

If you were going to be stranded on a deserted island, what musical item would you take with you and why?

My guitar! It’s portable and easy to write songs on, so that is for sure what I would bring.

I would LOVE to be on Saturday Night Live someday. I get really into the musical guests that they have there, and I always love the setup and performances that they put on.

Do you remember the first time you ever heard one of your songs on TV, in a movie or elsewhere? What was it and how did it feel? Where were you when you heard it?

I haven’t had any of my songs on TV or in a movie, but I have had them on the radio! It’s definitely a very exhilarating feeling to know your original stuff is out there for everyone to hear and that you were chosen to be on that channel.

I have always told people that I just really hope my songs can be relatable. I want people to feel like they have been through similar experiences before and find comfort in that.

I am so happy with how things have been going recently and can’t wait to see what is in store for the future! Thank you to my family, friends, and fans for your constant support, it means more than you know. Stay tuned for more news on the Kat Holland front!

An Interview With The New Trio LA BOUQUET On Their Brand New Debut Album and More!

CIMO FRANKEL Discusses His Forthcoming Debut EP and Much More!