An Interview with The Marvelous Beauhunks

We recently spent some time chatting it up with Fab Claxton, lead singer of the Marvelous Beauhunks out of Oshawa, Ontario, Canada.  If you haven’t heard of them, you really need to check them out!

[Backstage Vibe] Tell us about your band. How did you all met and get started working together.  [Fab]  The two Steve’s (Closs and Wright) were part of the original line-up back in the early 90s. That line-up broke up in 1992 and reformed for a reunion show in 2010 after Steve Wright wrote a book about the band’s hilarious early exploits. They brought me (Fab Claxton) on-board to fill in for the original bassist who didn’t want any part of the reunion. In 2012 the original lead singer left the band, and I took over on lead vocals. We brought in Fraz (guitar) and Duane McDonald (bass) from The Afterschool Cobra Gang, a side-project that Steve Wright and I had formed.

[Backstage Vibe] What brought you to music in the first place? How did your musical stories begin?  [Fab]  It’s the usual story, misunderstood kids growing up in an industrial city.  Not a lot to hope for; nothing else to do.

[Backstage Vibe] When you all are writing either the lyrics or the music behind the lyrics, do you have a special process that you follow or is it something where it just comes to you?  [Fab]  We try to write from real life but with a sneering perspective – unless we’re writing disco songs.  We haven’t written any disco songs.

[Backstage Vibe] What were some of the highs for your band from the past year?  [Fab]  Playing the NXNE festival in Toronto was exciting – but the biggest highlight of the year was definitely playing two nights at The Cavern Club in Liverpool, England as part of The International Pop Overthrow Festival. Standing on that stage topped anything else we’ve done…..so far.

[Backstage Vibe] What happenings are in store looking forward?  [Fab]  We plan to keep releasing new songs and hopefully playing some more high-profile shows. We’ve got a stockpile of songs to record and release so that should keep us busy for a long while.

[Backstage Vibe] Do you have any quick fan/gig stories to share with your fans?  Or any “I can’t believe that just happened to me” kind of stories?  [Fab]  When we got off-stage in Liverpool we were stopped by someone who wanted to hire us to play her wedding in September. She offered us 700 pounds, which was very generous – but we had to decline. We told her it was just too far for us to play her wedding. She looked confused and said “but you’re only in Ireland?!?” She didn’t realize we were Canadian. For some reason – everyone in England thought we were Irish.

[Backstage Vibe] Where can your fans find you on the web? [Fab]  All the usual places:

Vinyl Floor Sits Down For a Chat 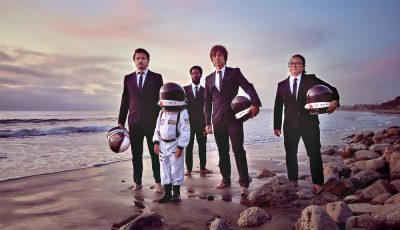