An Interview With The London- Based Singer-Songwriter And Actor, FREEMAN! 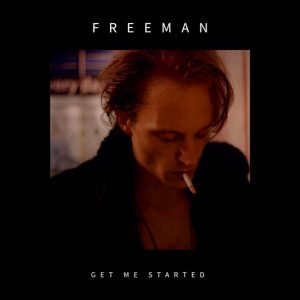 Get to know the London-based singer-songwriter, Charlie Freeman, better known as FREEMAN! His newest single,“Get Me Started” is currently out now ahead of his sophomore album, Love, due out September 27. This forthcoming new collection recalls themes of the 60s and 70s free love movement and encapsulates the bittersweet nature of romance and heartbreak.

Freeman says, “‘Get Me Started’ is a groove-based tune with a funk vibe, quite different in style to other tunes on the record. My reference was ‘Miss You’, one of my favourite Stones tracks, which they dropped during the disco fever of the late 70’s.”

LISTEN TO “GET ME STARTED”

In 2018,  FREEMAN released his debut album Truth, which was recorded live at vintage studio Eastcote using a tape and analogue set up, adding to FREEMAN’s authentically classic sound. The first five singles from Truth were all picked up BBC radio play, including a live session at BBC London and “BBC featured artist of the week.”

FREEMAN’s creative work doesn’t stop at music, as his acting career began in mid-2017 and includes a starring role in QIYI (Chinese Netflix) film, Chinatown Cannon, as well as lead roles in short films Defector and A Friend in Need. Two of his songs were included in Chinatown Cannon; the success of the film has led to a 60-day tour of China in March 2019, via one of China’s leading tour promoters, Magic Sounds. FREEMAN’S international endeavors also include offers for tours in Brazil, Cuba (where he lived as a teenager), potentially acting as a support band on an extensive tour of Germany, and an interest in touring the U.S.

Learn more about FREEMAN in the following All Access interview:

Good to be here ! I’m currently in Johannesburg! We are here to launch a single in South Africa

Now that we are half-way through the year, how has 2019 been treating you? What are some goals that you have for yourself this year? How close are you to reaching them?

Its been a great year.  Plenty of hard work is paying off and I’m super happy with the team I have in place.  This year I will be releasing a bunch of singles and the album ‘FREEMAN – LOVE’ in September.  We also start our world tour, taking in South Africa, Colombia, Ecuador and Argentina and maybe Brazil and Cuba!

It was everything.  I spent most of my waking moments strapped to headphones. When I learnt the guitar, at 20, I then became strapped to that ! I started writing songs and with that came a desire to share them and connect with people through the music.  Easiest decision I ever made !

I’ve had moments of dithering but I just needed to give myself a polite slap and remember that I’m a lucky b*stard doing what I love.  Nothing else really…acting and art would take more focus I guess if I wasn’t a musician

Well, you gotta be tough skinned.  Rejection and tough ‘constructive’ criticism is around every corner.  Plus, there’s a ton of sharks out there so you gotta use your nose.  At the same time, social media allows us all to get our stuff out there and connect with others, share the music etc.  I guess at any given moment in any industry, there are gonna be new challenges and one just has to adapt as best as poss!

Let’s talk about your forthcoming album. What was it like putting this collection together? Did anything surprise you about putting it together? How will you celebrate the release of it?

I loved it.  Hard work, long hours but a great bunch of musicians and friends ato was plenty of inspirational moments and it really flowed.  The ease of the flow was a lovely thing and tends to validate that you are on the right track ! Celebrate ?  Oh yes! We like to celebrate here at FREEMAN !!  Big party.  Hopefully a few… . Defo an official launch gig and party, please check @freemanrocknroll on insta for details!

How would you say that your new single “Get Me Started” prepares listeners for the rest of the album? What was the inspiration for this song?

Miss You by The Stones was the inspiration.  I wanted a groove fueled tune, funky and foot tapping.  It fits nicely on the album but the groove element does make it stand out too !  There’s plenty of rock n roll to enjoy here though

Can you talk about a few of the other songs on your soon-to-be released album?

London Nights is a Rifftastic ode to our lovely capital, Superman is a melancholic and impassioned take on letting go of negative people and Let There be Love is an all out 60’s sequel, Britpop sequel anthem celebrating LOVE !

What has it been like acting also recently? Do you find that you prefer one over the other lately?

I love acting and have met some wicked people.  Friends for life.  I haven’t done any in a while because the music has been the focus.  It always will be.  I hope to be able to do a decent amount of acting in the future for sure

Where can people see you perform next? Do you plan to tour at all this summer or later this year? Wrihat r.has been a favorite performance of yours so far?

Probably South America !  Gonna be there most of Oct and Nov.  Favorite so far?  You know what, I truly love them all.  Playing live is my fave part by a mile, connecting with an audience and hanging out with the band.  Bingo.

How do you think you have grown as a musician since you first started making music?

I’ve honed my craft, practiced my singing and generally grown much more confident.  I know exactly what kind of music I want to make now and I have found my truth in that

What has it been like keeping up with your social media accounts and all of the different platforms? Is it hard to stay up to date on it all? What would you say is your favorite way to connect with your fans now? What has social media done for your career so far?

The Stones!!!  Anyone who knows me knows I am obsessed haha. And Bob Marley!! Please can you bring him back?  I’ll get Mick and Keith over….whaddaysay?

It would be filled with people from very country and race and culture all coming together and having a great time to the common denominator of MUSIC.

What has been the coolest place/TV show/commercial that you have heard a song of yours? Where would you love to hear a future song of yours played?

We have been in a couple of films.  Good Q cos the dream one day is too end up in a super cool scene in a Scorcese film or something….wow

Thanks so much for listening, its greatly appreciated.  Hope to see you at a gig sooooon !