An Interview With The Genre-Bending Artist VAINES On His Newest Music and More!

He recently released the single, “Medicine.” This track showcases Vaines’ dark, ethereal bedroom pop vibe and with more music in the works, 2019 is already promising to be his biggest year yet.

“This song is kind of an interesting look at a relationship I’ve written about before,” Vaines shares.“It’s less about the toxic parts of the relationship itself, but the negative things I took away from it and how it affected future connections with people.”He continues: “Musically it’s a great example of all of my influences. One minute you’re listening to a moody r&b breakup song and then boom: guitar solo. If you’re confused about whether you should dance or headbang, I’ve done my job.”

Jared Gaines (under the moniker Vaines) grew up splitting time between his mom in the small town of Ogdensburg, NY, and his in Toledo, OH, with his aunt and uncle. His childhood was tumultuous, and his relationship with his mom remains strained due to her drug addiction. As a coping mechanism Gaines developed a goofy, over-the-top personality. He let his loneliness lead to creativity and put that energy into writing music and being involved in the local music scene.

In 2017 Vaines crossed the country to sleep at a buddy’s house in Los Angeles, before deciding to make LA his home. It was there that he began writing, recording, and tracking songs in his bedroom with just $200 worth of home studio equipment.

Last year Vaines released “feelingdown,” which was mixed by Serge Courtois (Nick Jonas, LANY, Bebe Rexha) and mastered by Joe LaPorta (Shawn Mendes, The Weeknd, K.Flay). It has since racked up over 173k streams on Spotify.

Learn more about Vaines in the following All Access interview:

Thanks for your time today! Where does this interview find you?
Hey there, I am currently hanging out in famous tourist hotspot, Van Nuys, California!

Now that we are more then halfway into the new year, how has 2019 been treating you so far? What are some goals that you have for yourself this year? How are those New Years Resolutions going?
2019 has been incredible for me so far, I’ve achieved some childhood dreams and greatly improved my living situation, I’m thriving. I’m kind of letting life take me wherever I drift so no big goals in mind, just letting the universe do its thing. Definitely hitting the gym and actually banging out some resolutions for the first time in recorded history.

Growing up, how important was music in your life? Can you recall the moment when you decided that you wanted to be a musician? Was it an easy or difficult choice to make?
Music was everything growing up. I had an affinity for performance at a really young age. I would do talent shows and put on little plays with my brother and sister for my parents. I knew I wanted to entertain and I wanted (want) everyone to like me always. When I was 12 my dad bought me a guitar and that was it, I instantly clicked. I got really good really quick and within 2 years I was giving lessons at a guitar shop and starting bands in my hometown.

Was there ever a time when you thought about doing something else? If you weren’t a musician today, what else could you see yourself doing? Would you be as fulfilled in life?
Absolutely. I bounced around from wanting to be an actor, wanting to do stand up, wanting to write, etc.. The first thing that I was pretty decent at was skateboarding so if my dad never got that guitar for me I think I would’ve been shredding public libraries trying to get into Thrasher mags. I still plan on pursuing most of those things, too. I’m the kind of person that can dive into new things pretty easily, but truthfully I know music is my calling. Plus I destroyed both of my ankles in a freak skating accident so that’s definitely off the table.

What has been the biggest surprise so far about making music your career? What has been an unexpected or welcome challenge to it all?
The biggest surprise is just the sheer number of people doing this. Writers, producers, session guys, sound guys, management, there are thousands of people in just my surrounding area who are involved in making music and it’s been a personal goal of mine to just meet as many people as possible and nestle myself into this community. I guess the biggest challenge for me is making real art that people can connect to which is sometimes impossible. Thankfully I’m a driven person and I don’t stop until I overcome that impossible task.

How do you think you and your music have been influenced by your hometown and where you live now?
I honestly can’t stand my hometown, or anyone in it. My drive in life is to get my family out of there and into a better place. I would say it influenced my music in a sense that it reflects just how different I am as a person than the place I came from.

Why did you ultimately decide to not go by your own name but a moniker instead?
I think that people attach themselves to a mythology. When I was a kid I always thought the “first name, last name” artists were boring, but people like Beyoncé or Eminem had a sort of larger than life persona and I hope that I can be that idol for someone poor nerd like me in the future.

Let’s talk about your newest single “Medicine.” What was the inspiration for this track? How would you say that it compares to anything that you have previously released? When do you hope to out a 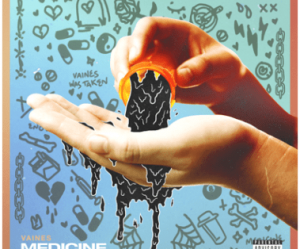 full collection of new songs?
Let’s talk about it. Medicine is my favorite song that I’ve released so far. It’s about a weird relationship that I had with a person that I really couldn’t understand as a younger dude that seemed manipulative and toxic. I think it’s the perfect Vaines track and it shows every side of me that I want to show. You can hear every influence from MJ to Metallica and lyrically I put a cap on everything I felt about that situation. As soon as I wrote it I knew that I hit the nail on the head and I needed to expand my sound if I was going to beat it. The next batch of songs are going to be a new journey and I plan on releasing them late summer/early fall.

What has changed about your style of music? How has your creative process grown over the years?
I used to make metal music, then I made rock songs, then I made pop songs, and now I make whatever I want. I rapped as a kid so now if I feel like it, I’ll rap on a song. I’ve grown into the artist I’ve wanted to be for years and I fully expect my sound to continue to evolve as the years go by. If you hear too much of the same thing from me, I’ve failed myself as an artist and you should burn me at the stake.

What has it been like keeping up with your social media accounts and all of the different platforms? Is it hard to stay up to date on it all? What would you say is your favorite way to connect with your fans now?
I suck at social media. I’ve never had a passion for it. I connect with fans through my music, just like I connected with my favorite artists through theirs.

Who are some of your favorite artists or rather, what musicians have continued to inspire you and your music? Who would you absolutely still love to work with in the future?
I am a shameless music fan, I can have a favorite song in any genre from any time period. I really like Michael Jackson and Metallica like I said earlier but I also love stuff like No Rome, Matt Maeson, Joji, and Jon Bellion. You can also catch me listening to the blues, jazz, classical, but that’s only if I’m feeling weird. I’ll work with anyone, anywhere. Music is collaborative by nature in my opinion and as a solo artist I really love working with other music makers.

Where can fans see you perform next?
You can find me in a city near you on the Peach Club Tour with Emarosa and Too Close To Touch late November/early December!

If you had an unlimited budget and your schedule was free, what would your dream music video look like?
Oh catch me fighting a dragon and saving the kingdom, I’m really into that nerd shit.

If you were going to be stranded on a deserted island, what musical item would you take with you and why?
Any guitar. That’s my comfort object.

If your music was going to be featured on any TV show that is currently on right now, which would you love it to be on? Or if you prefer, what is a movie that you love that you wish your music was featured in?
I think throwing a Vaines song on an episode of Spongebob would be the dream. Or in like a Marvel movie so I can be super rich and buy my dad a riding lawnmower.

At the end of the day, what do you hope people take away from your music?
I hope people can see me as a person who loves life and music and maybe some of that can rub off on them as well.

Would you like to share anything else with our readers about your music?
Yeah my music is way rad and you should absolutely take 20 minutes to listen to all my 3 songs and Medicine twice.

An In-Depth Interview With the Brooklyn-Based Indie Quartet PLASTIC PICNIC!