An Interview With The Funk Band, LETTUCE, On Their Latest Miles Davis Inspired Album! 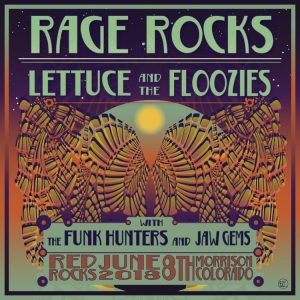 Known for their incendiary live shows, extensive touring, die-hard fans, and massive two-decade career, Lettuce brings forth a new vitality to classic funk music. Comprised of a stellar group musicians – Drummer Adam Deitch, guitarist Adam Smirnoff, bassist Erick “Jesus” Coomes, keyboardist and vocalist Nigel Hall, saxophonist Ryan Zoidis, and trumpet player Eric Bloom – the members of Lettuce are highly sought after musicians who, together, continue to earn their name as a can’t-miss live act and acclaimed masters of their craft. Blending together these talents in a sound distinctly their own, they have garnered praised by the likes of New York Times, NPR, Billboard, Consequence of Sound, Relix, Red Bull Music and more.

Lettuce’s newest album is called Witches Stew. Listen to it HERE. The album is a tribute to the late Miles Davis, one of Lettuce‘s biggest influences, and is an artistic/interpretative take on Miles’ historically experimental album Bitches Brew. Comprised of a collection of seven songs, handpicked by the band, the album was recorded at the 2016 Catskill Chill in Lakewood, PA. The first single is called “Shhh / Peaceful” which was released on the 26th anniversary of Miles’ passing.

Learn more about Lettuce in the following All Access interview:

“I’m currently in Australia at the moment touring. It’s 7:35am and I’m watching Die Hard: with a vengeance. My favorite album right now is an album called Saturday Night Special by Norman Connors.” – Nigel Hall

“I’m currently on an Airplane about at LAX about to take off for Nashville to visit Tommy And Shelley Coomes for the Holidays. Headphones are on and “All the Way Down” by Étta James is playing. All music is art …all art is a blessing.” -Jesus Coomes

How do you think Lettuce was influenced by the city of Boston? How did that particular music scene affect you all?

“The city of Boston is the physical location of our meeting and brought about the formation of the friendships we now call Lettuce. We were heavily influenced by the musicians that inhabited the city at the time as well as the College radio stations’ DJ’s. The college we attended was also quite helpful in that it brought us all deeper and deeper into the wonderful world of the audio arts.” -Jesus Coomes

How does 2017 compare to last year? What all are you most excited about for 2018? Will any of you make New Year’s Resolutions?

“For me personally, I can’t really make any proclamation as to what I’m going to change next year. We all are doing the best we can to do the best we can. One day at a time.” – Nigel Hall

“2017 was amazing. I also look forward to 2061 which will be the year that Haley’s Comet comes back around… I hope to either film it or drive it. That’s July 28th (pencil it in)” – Jesus Coomes 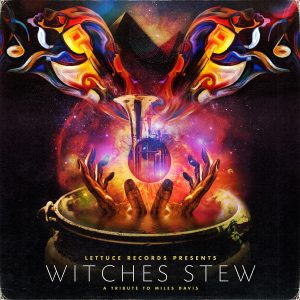 Let’s talk about your newest album, “Witches Stew.” Why did you decide to create a Miles Davis tribute collection? How long have you been wanting to make this artistic interpretation to Miles Davis’ experimental album, “Bitches Brew”?

“I think making this album was something none of us had dared to dream before it actually happened. This music (of Miles Davis) has always been extremely sacred to all of us and attempting to recreate that vibe has only been a dream. The day that we performed it I know I was shocked at the sound that was delivered, hence we bring it to you in its living breathing form. It has been fun and a great honor to continue getting into that realm live.” -Jesus Coomes

What did it feel like being able to release your first single “Shhh / Peaceful” on the 26th Anniversary of Miles’ passing? How do you think this track prepares listeners for the rest of the album?

“It feels amazing to acknowledge the life and music of one of the greatest artists of all time especially using the medium of instrumental music. There is so much that can be misconstrued when writing books or doing documentary style movies. The picture of these artist is often tainted in our minds forever because of these pieces, but with instrumental music we can give you our feelings about the subject in a very unbiased way.” -Jesus Coomes

Did anything surprise you about reimagining these Miles Davis tunes? Were there any unexpected challenges?

“It was all quite unexpected. I remember feeling a great vibe and was surprised that , at least from my perspective, it had a lot of the feeling of the original material. A lot of things happened musically that none of us planned.” -Jesus Coomes

How do you think this album shows the growth this band has gone though over the years? What has remained the same?

“With the release of this album it once again breaks us free of genres and expectations and allows us to express ourselves with more style.” -Jesus Coomes

You’ve been described as a “can’t miss” live act. Can you talk about what a typical show is like for this group? What can fans expect from one of your future shows?

“We leave it all out on the stage. Blood, Sweat, Tears and pure joy. It’s a celebration of life…The funk is a combination of a happy emotion rooted in the realities of life. We play with the intention to help ourselves and those in attendance to achieve balance in this crazy world as well as to connect with each other. The show vibe is deeply spiritual to us as a band and seeing the crowd dance as hard as they do while intently listening to the improvisations happening is what makes each show a once in a lifetime event.”  – Adam Deitch

While this may be difficult to answer, where do you think you are all happiest- on stage performing, in the studio recording or elsewhere?

“I think that being both on stage and in the studio represent the same thing for me. Those are the places that people actually see the real me. Especially when I’m with my family. We all really enjoy playing music together and It shows whether we’re in the studio or not.” – Nigel Hall 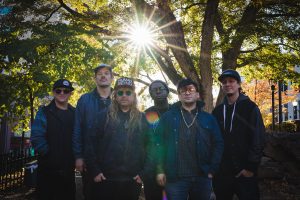 “We stay pretty stoked no matter where we are or what we are doing. Music makes us happy. A great thinker once said, ‘When you honor the present moment life begins to flow with joy and ease.’ – Jesus Coomes

We are living in a crazy and at times rough world right now so I am curious how you think being in this band gives you the most joy in life today? Do you think that new music being created today is going to reflect this difficult time?

“It has to. Anything you create is a reflection of the time it was created in.” – Nigel Hall

“We must create a frequency of love, peace, joy and equal rights to combat the rest of the BS. :)” -Jesus Coomes

Who are some of your favorite artists right now? Who would you love to work with in the future?  What would be a dream collaboration for this group?

“The message of our music is empowerment. It is by influencing each other that we can see ourselves in a more powerful, kinder, more realistic way. We want people to understand that they are powerful and important. No one will ever be you.” – Jesus Coomes

An Interview With The Rising Pop Star, MATT LEGRAND On His Latest Music, Favorite Artists and More!

An Interview With The Newcomer Pop Singer, ELESA MARMO!