An Interview With The Canadian Pop Band, WINONA FOREVER! 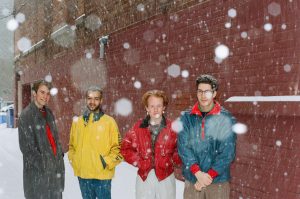 Since forming in 2014, the band has strived to create the best possible self-produced content. With two Canadian tours under their belt and excitement building around recent singles, Winona Forever is looking to reach new listeners with their 2019 album “FeelGood” and continue spreading their love of music, with an independent spirit.

Winona Forever crafts tight, groovy indie pop that takes as much influence from 70’s feel-good music as bedroom pop. Prioritizing punchy rhythms and fun melodies, they create a sound that is wholly contemporary.

Listen to the album ‘FeelGood’ in full now: https://soundcloud.com/winona-forever/sets/feelgood-final or Stream at Spotify.

Or watch the video to their latest single “Gazing” here: https://www.youtube.com/watch?v=lIXxuZ0FLbo

Now that we are well into the 9th month of the year, how would you say that 2019 is treating the band so far? What have been some goals this group has had this year? How close are you to reaching them?

2019 has been solid! We had the goal of releasing Feelgood and touring the album in Canada and the US. Currently we are answering questions on the road in Washington, DC. Our first US shows have gone really well and the response to the album has been very positive, so we are feeling good about things!

Can you recall the moment when you thought you could be in this group together? Was it hard to think of a name that you could agree on? Has anything surprised you about this musical journey so far?

Rowan and Alex started this project in 2014 to record an EP that of tunes that Rowan had written. The name was Alex’s idea and born out of a trend of joke-y band names in Vancouver at the time.

There’s definitely a strong DIY community in Vancouver where we played shows for the first few years of being a band. The DIY ethic has stayed with us as a band and we definitely learned from playing underground spaces where immediacy and tight execution of a live show would often sound best. 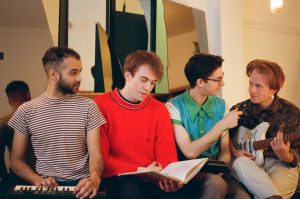 I always like to ask bands if you all hang out socially apart from the music? In other words, when you aren’t working on music, do you guys enjoy hanging out for fun?

We actually all live together.. We definitely like cooking and hanging out apart from music! We’re also able to work on music more casually/spontaneously.

Congrats on just releasing your newest LP, Feelgood”! What was it like making this collection? Did the process surprise you guys at all? How did you celebrate the release of it?

It was a pretty enjoyable process of slowly writing, demoing, refining and arranging the 10 tracks over a period of 2 years, We didn’t have a very clear idea of what we were setting out on when we starting working on the singles for the album – and we definitely didn’t know the traction they would get leading up to the release of the album!

While it’s hard to pick favorites, can you pick out a few songs on this new LP and talk about how they were formed and got to be on this collection?

Backseat was a fun one, it was written well after the rest of the album and we finished mixing it a matter of days before the album got mastered for vinyl. It has a really fun, fast energy that felt reminiscent of our previous album and we’re glad it made the cut.

Joyride took a few forms over the course of writing the album, eventually being re-written with lyrics referencing the tour/move we did to Montreal prior to Feelgood’s release. It’s turned into one of our favourites to play live.

Generally, how do you guys go about writing your music? Do you write together or separately?

A bit of both really! Some songs are born out of jamming together and are co-written, while others will be written/demoed by Rowan or Ben before the band works on things all together. Alex has been the one to record and mix all of our music and things are definitely quite collaborative from A-Z.

Both in the studio and on stage are a special moment in their own way. This band has really been an excuse to make cozy home studios and collect gear to keep exploring recording techniques. We also like to take a fun approach to the live show, keeping the setlist different every night.

Where can fans see you perform next? What do you think makes for an ideal show for this group? What has been a favorite show of yours in the past?

Philadelphia was a really fun show! We like playing with like-minded bands and a crowd that gives off energy, 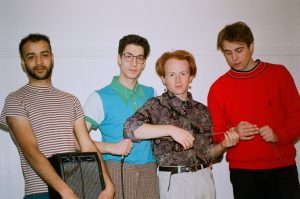 everything else is just a bonus.

How has social media impacted this band? How often are you all on your different sites interacting with fans? How have you been able to utilize it through the years?

Being in this band absolutely provides us joy. Being able to express ourselves creatively is a great escape from all of the problematic things going on as well as trying to spread a more positive message.

What musicians have really been inspiring you since you first started making music?

Lately we’re aiming to make a dance-y, groovy song that someone can relate to! We also really like doing everything ourselves, from the recording process to booking shows etc.. and I hope that people feel like they could do the same thing.

An Interview With The New York Based Duo, SHAKEOUT!