An Interview With The 15-Year-Old Twins MAX + HARVEY On Their Latest Single ‘Trade Hearts’ and Much More! 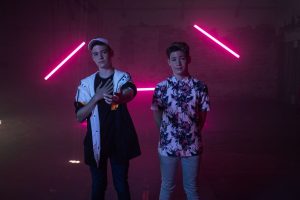 Stream the song on all platforms HERE: http://hollywoodrecs.co/TradeHeartsSingle

On their new song, Max & Harvey said “”Trade Hearts” is unlike any of the other songs we’ve released so far, and we couldn’t be more excited that it’s our first song we’re releasing with Hollywood/RMI. It perfectly captures that painful moment in a relationship that so many people have experienced. We’re really happy with how it turned out, and hope our fans love it too.”

Max & Harvey took home the 2018 Radio Disney Music Award for “Favorite Social Music Artist” and they were nominated for “Social Star” at the iHeartRadio Awards.

From day one, Max & Harvey’s refreshingly fun and authentic sound has connected with fans across the globe. The 15-year-old Berkshire based twin brothers have been singing and playing instruments from an early age. They came to prominence two years ago, posting covers of their favorite songs, as well as their own original songs, on their social media platforms. Now with almost 6M followers on TikTok and over 1M followers on Instagram, the boys, who are signed to RMI Recordings in partnership with Disney Music Group/Hollywood Records and Polydor in the UK, are focusing on their music. Max & Harvey boast over 20M views on their YouTube channel, and release videos weekly giving their fans an inside look at their daily adventures! The boys released their first book “MAX AND HARVEY (IN A BOOK),” and a BBC documentary “MAX AND HARVEY (IN A SHOW)” in conjunction with their book, both are out now. They also host a weekly CBBC show called “FOMO.”

Learn more about Max & Harvey in the following All Access interview here:

How has 2018 been treating you guys? What is one musical goal that you have had for this year and how close are you to reaching it?

In 2018, we really wanted to drop an original song that we think best represents our sound and the direction we’re headed in and we got to do that with “Trade Hearts.”

Can you recall the moment when you thought you could be in this duo together? Has anything surprised you about this ride so far?

Harvey: I think the moment we decided we were going to be a duo together was when Max began to learn to play the guitar. He would play and we would both sing and we were about 8 or 9 years old.

Max: I’ve been surprised by how many amazing people we have met on our journey. I never thought we’d ever have this kind of opportunity to meet so many talented and knowledgeable people.

How do you think your hometown has influenced the sound and how you both carry yourselves in this band?

I think being British definitely influences our sound. We try our best to maintain our accents through singing, which can be quite challenging seeing as most mainstream pop is American.

What did it feel like signing with RMI Records and then releasing your first single, “Trade Hearts,” with them?

It’s been amazing! Signing to RMI Records / Hollywood was really a dream come true for us and to be able to share “Trade Hearts” with our fans and seeing their reactions has been really awesome.

What was the inspiration for “Trade Hearts”? How would you say that it is different or similar to anything else that you have put out? 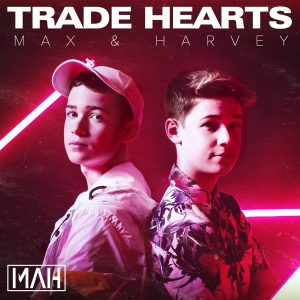 “Trade Hearts” is unlike any of the other songs we’ve released so far. We’ve always loved EDM so to be able to incorporate elements of that genre into our pop sound with our new music has been really exciting.

When do you hope to release more new music and a full collection of new songs?

Why did you decide to release a book and BBC documentary on top of everything else you two do?

We hadn’t even thought of releasing a book and a BBC documentary until we were approached by them. They pitched us the idea that they were basically just going to follow us for a few months and we loved the idea because people would be able to see every single crazy thing we do that they wouldn’t normally get to see.

What did it mean to you two to win the 2018 Radio Disney Music Award for “Favorite Social Music Artist”?

It meant the world to us and was one of the highlights of our year! Our fans are the BEST fans on the planet and we’re so thankful for all of the support they give us.

How was your headlining UK and Ireland tour? What were some favorite venues and crowds?

Our headlining tour was incredible! Being able to meet our fans and see their reaction to our music was really cool.

Where do you think you are both happiest- in the studio recording new music, on stage performing or elsewhere?

We are both 100% happiest performing on stage. We’ve been doing it for as long as we can remember and it’s pretty much the whole reason that this is the profession we want to have in the future.

How do you think being musicians and in this duo gives you all the most joy in life today?

Releasing and performing our music has always been a dream of ours so to be able to do this everyday brings us a lot of joy.

Who would you love to work with in the future? Who are some of your favorite artists right now? What do you think would be a dream collaboration for this duo?

Some of our favorite artists are Twenty One Pilots, Marshmello, and AJR because they all put on incredible, high-energy shows and we love how creative and unique their music is.

If you guys were all going to be stranded on a deserted island, what musical item would you want to take with you and why?

Definitely a ukulele because it’s a calming and easy to play instrument that you can sing loads of songs to!

We just want our music to be something to take people away from the real world and have fun listening to. If we can distract people from their busy lives with our music, or videos, just to make their day a little bit better, then that’s what makes us happy doing what we do.

We’re so excited for all our new music. It shows our growth and how far our music has come since we first started releasing music.

Singer-Songwriter MALYNDA HALE Opens Up About Her Newest Music, How 2018 Turned Out and More!