An Interview With Songstress, SAINT SPICER! 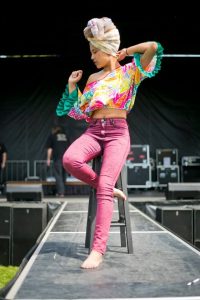 Get to know the soulful singer and songwriter Saint Spicer!

Based in Austin, TX, Saint Spicer has a magical way of telling her truth. Combining silky vocals and fiercely honest lyrics, she conveys the harsh realities of life with dignity and sincerity.

Listen to her newest track, “On Repeat” via Spotify here.

Infused with sensual elements of funk and soul, the song gives listeners an intimate glimpse into Saint’s own misadventures in love and sees her exploring the toxic patterns she has begun to recognize in her romantic relationships.

What’s especially awesome about Saint Spicer is that she aims to build a community through her music and believes that everyone should be celebrated for being their best selves.

Learn more about Saint Spicer in the following All Access interview:

Ha, right now I am in Denver on a quick birthday vacation! Then it’s back to Austin.

Now that we are into the 4th month of the new year, how has 2019 been treating you so far? What are some goals that you have for yourself this year? How are those New Years Resolutions going?

This year my goal was to invest more in myself. It’s going great, and I am having a blast making music and being recognized for it! Some other goals I have are to finish recording the music for Space Cowgirl, as well as to start performing more. Next year, I want to go on my first tour.

Music was my everything. I have an auditory memory,and to this day I can remember the lyrics to over 450 songs across all genres, including metal, “screamo”, country, jazz, and hip hop. Some people are just lucky and they know their soul’s calling from the moment they are born. I was one of those people. But it was still a difficult choice, as everything we see around us tells us to color within the lines. This is my life though, and I’m going to live it how I want.

I would not be as fulfilled, but I’d love to be a marine biologist. As far as my life though, I do not see these two fields as mutually exclusive. I plan on getting dive certified and going on some exploratory trips as soon as I can!

There have been so many surprises. The biggest was probably meeting my bassist Jason. I found him on Instagram and he is casually the best bassist in town. The second surprise was getting signed to a record label and watching how more people listened to my music. I am growing so fast I can hardly keep up! 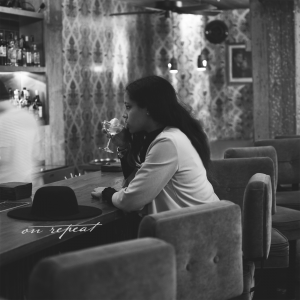 Let’s talk about your newest song, “On Repeat.” What was the inspiration for this track? How do you think it prepares listeners for more music from you?

As far as inspiration, when I wrote this song, I was having a very bad case of the fall blues. I was crying everywhere for no reason, and I wanted to write a song to get that out of my system. As far as preparation—
I think it prepares people by giving them a solid baseline understanding of my music. What I’m trying to do is world building—having each song become a cohesive sonic landscape to which people can escape and to whatever work or rest they want.

When do you hope to release more new music and a full collection of new songs?

I’m releasing a music video for “On Repeat” this month, and another song in May! I’m excited to continue building my career and am so thankful to have had such a strong reception to “On Repeat” this far.

What has it been like keeping up with your social media accounts and all of the different platforms? Is it hard to stay up to date on it all? What would you say is your favorite way to connect with your fans now?

Yes!! It’s so hard for me because I am a really private person. I don’t understand how to get all the photos and videos that people want. I wake up in the morning and I know I look good, but my first instinct in any given situation has never been “omg take a picture.” So it’s been very tough. Instagram is the best way to keep up with me, as I update that the most often, and it is my favorite place to chat with people.

My current inspirations are all over the musical spectrum, from Rico Nasty to Beyoncé to ThunderCat. I love musicians in general, and I really hope to collaborate with TeaMarrr in the near future! She is my Aries twin, and watching her hustle over the past few years has been so inspiring to me.

Where can fans see you perform next? Got any upcoming tour dates planned?

Oh gosh, I’m prepping a show now, but it takes a lot of work since I also perform in an aerial apparatus. It’s called the Lyra, and it’s a spinning hoop 4 to 6 feet off the ground! It takes a lot of training, but the Space Cowgirl’s got to put on a good show.

In the desert in Arizona, 10 days, party in the desert! That is my dream video. 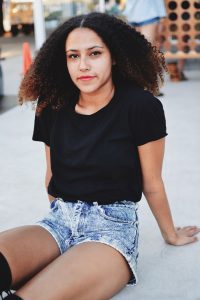 If you were going to be stranded on a deserted island, what musical item would you take with you and why?

Piano. You can play anything on the piano.

This is kinda silly, but I want my music in an anime! I don’t really watch TV or movies because I’m so into Anime, it’s actually quite embarrassing. I would love to write for Boku No Hero but I don’t think I have the right sound. I know, I’m a huge nerd!

Do you remember the first time you ever heard one of your songs on TV, in a movie or elsewhere? What was it and how did it feel? Where were you when you heard it?

I heard my song at a coffee shop once and I cried! And I called my dad. It just felt real.

I just hope it’s a place they can go to when they ended it. I hope it lasts forever and never loses its luster. I hope it can heal.

An Interview With The Australian Musician Behind the Art-Pop Project, RVBY MY DEAR!