While all musicians stand on a physical platform, it’s often what they stand for that makes them stand out from the crowd. Meredith O’Connor is doing just that—helping fans who have dealt with being bullied.

All Access Music: “Describe your sound to new listeners.”

Meredith O’Connor: “My music is pop, but heavily influenced by the theatre background that I had growing up, and is also influenced by Queen.”

AAM: “What one song best represents your sound? Why?”

MO: “The song that best represents my sound is “Just the Thing”, because it is upbeat, pop, and fun, but the bridge was written to show power and range. I really think it’s important to give my fans, who are mostly kids like me, interesting and exciting music that is dynamic with unexpected aspects to it.”

AAM: “Who or what influences your song writing?”

MO: “Queen, Billy Joel, and my first (early writing) was influenced by Taylor Swift. I believe that it is important to write what you know, and what you are passionate about.”

MO: “I am rarely in one place for a long time with my schedule, so the locations and times vary. I am an incredibly random person, and with that comes voice memos of song ideas at 3am, on the plane, or even backstage before a show. Inspiration to me comes in tidbits, it is just about expanding on a hook or phrase I hear initially.”

AAM: “How do you leave your mark with new fans?”

MO: “I let them know things that I wish I knew when I was going through mental trauma and bullying. Most of my fans are experiencing issues that come naturally with growing up, some also face abuse, bullying and violence every day, and hence the reason they relate to my anti-bullying song “The Game”. My fans often say that they feel less ashamed, and more proud of being different after seeing a show or hearing about me, and that is my goal.”

AAM: “How does your style add to your overall image?”

MO: “My style is bold, and stands out. I feel most comfortable at red carpets or award shows when I’m wearing something that is almost physically hard to not see if that makes sense. I think it is important for me to leave a mark with what I have to say to the world, and my style reflects that.”

AAM: “How do you utilize social media to help your career?”

MO: “Youtube is actually how I got known initially. The internet is a beautiful thing, of course there are flaws (cyber bullying) but the opportunities it has created make me forever loyal, and I believe it is a great tool to discover actual real talent.”

AAM: “Describe the very first show you ever played. (Where was it and how did it go?)”

MO: “My first show was opening for Jon Walker from Panic at the Disco, and it was really nerve wracking but also cool. The first band I had actually is now called Wait 4 It. I was used to being in shows from the theatre company, but this was something different.”

AMM: “Where do you see yourself in five years?”

MO: “In five years I hope to never let my fans down, or take the road that some artists have felt they needed to take, because I am blessed enough to be in this position now, and I will continue to do my job by being the best role model I can be.”

AAM: “Where can fans see you live soon?”

AAM: Do you work with or volunteer with any charities or social causes? Tell me about your involvement.”

MO: “Hamogelo, means ‘The Smile of the Child’;  they are from Greece. In America I am working with Champions Against Bullying and Rise and Stand as well as Free 2 Luv.” 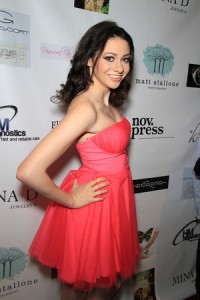 Q&A with BRANDON BOYD of INCUBUS